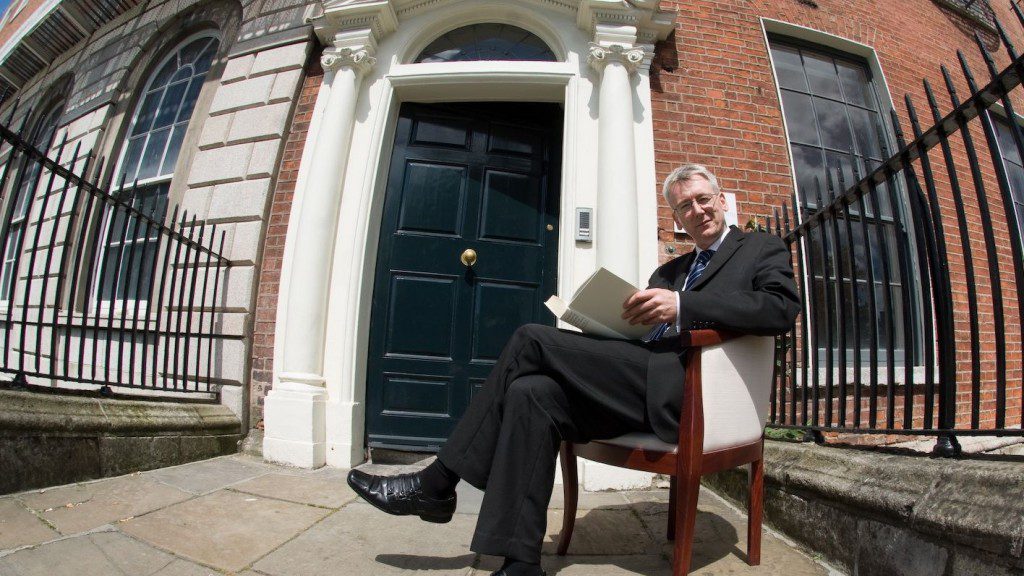 It is not common to see a poet’s debut appended with the kind of subtitle that is normally reserved for authors of more than one collection. Yet, Cathal McCabe’s first published volume bears the words “selected poems” in self-assured black capitals on its plain cover under the silver cursive of the title proper: Outer Space. Unlike a young poet’s first book, the collection does not represent an initial step beyond juvenilia, nor does it offer a simple “best of” assortment from an established poet’s large body of work. McCabe’s poetry has so far been scattered on numerous pages of anthologies, newspapers and literary magazines, and the “generous selection spanning twenty years or more” (as the blurb on the flap has it) is an attempt to gather a representative overview of his work in a single volume.

This effort was undertaken by Metre Editions (the imprint of the literary magazine Metre), and the editors, David Wheatley and Justin Quinn, have produced a book which presents McCabe as a versatile poet of all trades. The array of forms and styles stands in a stark contrast with the plain cover. One might be reminded of the The Beatles’ famous self-titled double-LP, commonly known as The White Album. Inconspicuous in its cover design, the plain white sleeve hid a textbook of musical genres, a smorgasbord of various styles ranging from blues and ska to ragtime and avant-garde.

Similarly, Outer Space is a poetical miscellany featuring, on the one hand, traditional, regularly rhymed poems, as well as variations on elaborate forms such as sestina (“A Postcard from London”) and impressionistic jottings, concrete and graphic poetry (“One for the Road”) on the other. The long span of McCabe’s career could play an important part here, but the poems do not seem to be products of different creative periods corresponding to passing literary fashions, for they, in spite of the diversity of form, communicate perfectly with one another across the pages.

The collection shifts not only from style to style but also from one place to another. Born in Northern Ireland in 1963, McCabe lived in Poland for fifteen years and a number of the poems are translations or adaptations of Polish poets, including Wisława Szymborska, Bohdan Zadura and Jerzy Jarniewicz. McCabe’s poems are thus stretched between Poland and Ireland, between the shores of the Baltic Sea and the Beach House on Cranfield Point.

Yet, McCabe, naturally gravitating towards marginal spaces, soon moves from these frontiers to the final one. “Meeting in Outer Space” is a poetic response to Edward Munch’s painting of the same name and perhaps also inspired by another work by Munch, “The Kiss,” in which the bodies of two lovers blend into each other in a passionate kiss. This moment of strong emotional connection is followed by a loss of self and the intimacy of life gives way to cold, impersonal dead air space. A faint echo of Philip Larkin’s “Aubade” (“no sight, no sound, / No touch or taste or smell, nothing to think with, / Nothing to love or link with”) gives the impression of a meditation on death from the “other side:”

Our forms now fluid, we wait for rebirth,
float beyond Time, a long way from Earth
(though we have no eyes and so cannot see,
no ears with which we might listen –
might there be something, I wonder, to hear? –
no way of touching or linking up, even…).
Is this a dream, or is it the bliss
they told us was Heaven,
left without mouths, with which we would kiss?

The theme of mortality and loss can be found throughout the collection. Writing about the eternal themes of death, memory and the transience of human experience, the poet typically has to tread carefully to avoid cliché. McCabe chooses a different strategy: he does not strive to come up with a flashy new conceit and essentially embraces for example the all-too-familiar winter landscapes and images of snow representing death and forgetting. However, he always puts a twist on the familiar imagery, which in its simplicity is usually more effective. “The Snowman,” which consists of a census form for a snowman in the winter of 2001, presents a fresh new angle on the hackneyed “snows of yesteryear” and provides a poignant final point with the line “DATE OF EXPIRY – 2002.”

In “At My Mother’s Grave” McCabe touchingly thematises the motif of transience, together with the problematic inadequacy of poetic form. The poem is both written and unwritten, and though the inexpressibility of a strong emotion is a staple in poetry, McCabe paradoxically succeeds in expressing the sentiment succinctly and in a plain, yet compelling style:

I shall throw this still unfinished verse
(‘At My Mother’s Grave’) into the bin
or into a box with the others.
It’s all untrue – or it would have been
had I gone on. The truth is much worse.
The grave is now also my father’s.

Because the volume is such a “generous selection,” there are inevitable “fillers” and it is clear that not all poetic styles suit McCabe perfectly (some of the concrete poems are the worst offenders in this regard). The most powerful poems in McCabe’s belated debut are arguably those that subtly twist traditional form and subject matter. Now that his selected poems are published – and it is well that readers do not have to hunt for his poems in magazines and anthologies – one is left with a question: will he follow with a single collection, or will we have to wait another ten or twenty years for Selected Poems II?

MARTIN SVĚTLÍK is a Czech translator. He graduated with an MA in Irish studies from Charles University. He translates both from English (W.B. Yeats, Anthony Hecht, Philip Larkin, Norman McCaig) and Irish (Brian Merriman, Ailbhe Ní Ghearbhuigh). His translations of Flann O’Brien’s short stories featured in the anthology Muž, který vybouchl. He contributes to several Czech literary magazines, such as Revolver Revue and iLiteratura.