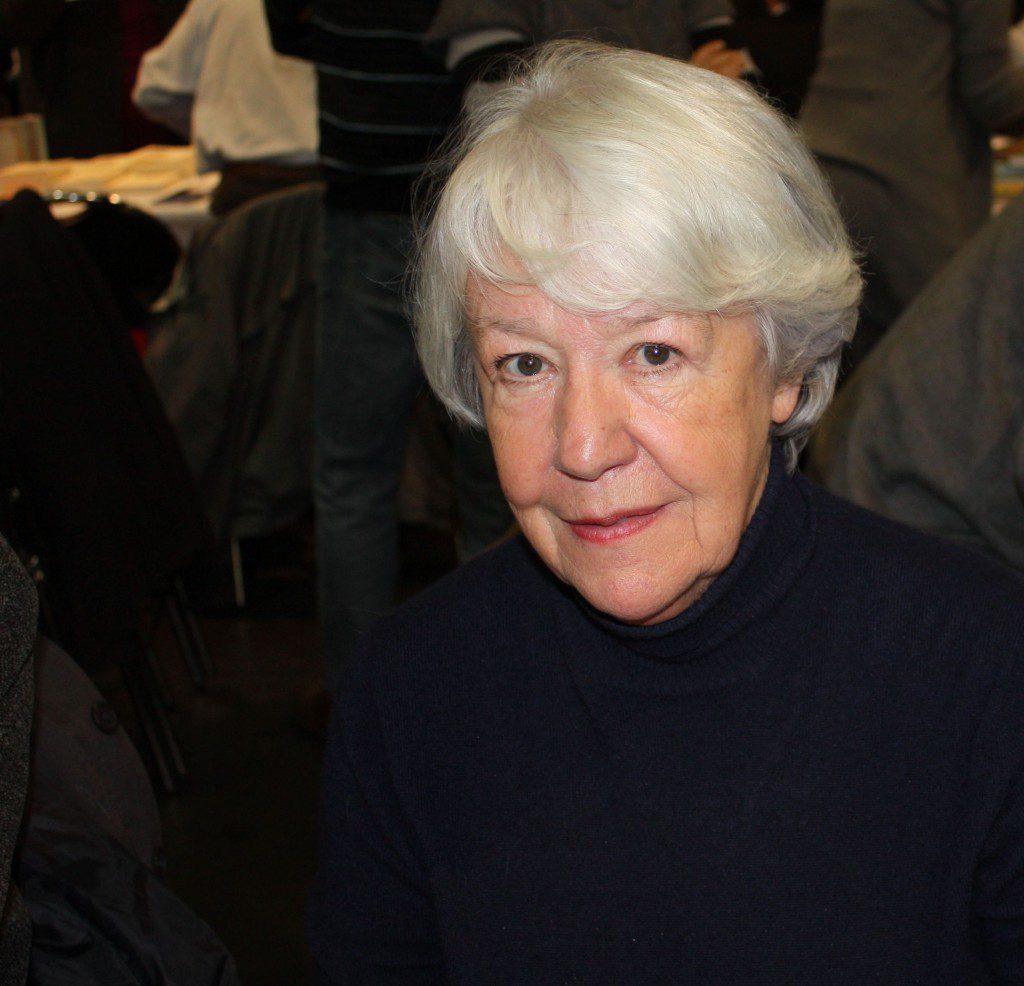 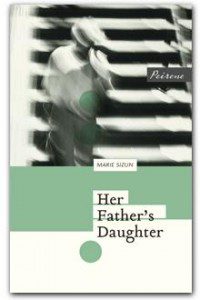 It’s a winter’s afternoon in the kitchen of the apartment. They’re both there, the mother standing doing her ironing, a tall figure, and beside her the little girl, sitting in her special child’s chair. They’re not talking at the moment. The child is thinking about what her mother has just said. On the radio a few minutes ago there was some news, news about the war, as usual. When the announcement ended, her mother switched off the radio and, still ironing, said something like ‘Your poor little daddy’… or perhaps ‘When your poor little daddy comes home’… Offhand. Just like that.

Yes, those were the words she used, not really said to the child, no, but more as if she were talking to herself, pressing the iron slightly more firmly onto the damp linen, and it made the hissing sound swathed in steam that always delights the child. She would normally be enjoying this peaceful moment spent with her mother, in the small kitchen warmed by the heat of her ironing. But right there, in what her mother said, in those words, something loomed before her, something quite new. Something intruded into the intimate, familiar world of the kitchen. Something the child perceives as a threat.
When. Comes home.

Behind her, on the end of the shelf, stands the old black radio, and just before her mother turned the knob it was from here that the peculiar man’s voice spoke, sounding solemn and metallic, so different from the soft, lilting, almost whispered voice of the child’s mother. The voice of spoken news. The child knows it. The voice that talks about the war. The child understands. Her mother has explained. Has told her she has a father who’s fighting this war. Or rather he’s a prisoner, somewhere far, far away. A father she’s never seen, except in photos.

One thing she doesn’t understand is that her mother always refers to him as your little daddy. But the man she’s seen in photographs looks quite tall, he looks a bit like the man at the dairy, or the pork butcher, a bit younger perhaps, not so ugly. Her mother sometimes cries when she talks about him, especially recently. The child doesn’t like that. She loathes these tears that give her mother a red nose, puffy eyes and a twisted mouth.

This time her mother didn’t cry. She simply looked back down at her ironing, with a big lock of hair hiding her eyes and her mouth, as she said quietly, ‘When your little daddy comes home.’ Or was it ‘When he comes back…’?

Then the child suddenly asks, ‘Is he coming back? Why?’

The mother’s eyes alight on the child, her expression filled with astonishment and something not unlike pain, and the child gauges all the oddness of that expression. Her mother has carried on ironing and is no longer looking at the child as she says, ‘Well, because the war’s going to end, my darling. You heard what they said on the radio. All the prisoners are coming home, and your father along with them.’

That’s all. The child and her mother fall silent.

There’s a big black fly crawling slowly over the yellow and white tiles of the kitchen floor. The child stares, watching its progress. The only thing she can see now is this fly. This big black fly. Nothing but this fly.

‘When?’ the child asks eventually.

Silence again. The mother and child don’t look at each other, each lost in her own thoughts. They’re surrounded once again by the warmth of the kitchen, of their familiar world, where everything seems to be in its proper place, the small green cast-iron oven perched on its cabriole-legged stand, the yellow diamonds of the tiled floor, the huge dark stone sink where they wash themselves and the dishes, the shelves and the radio with its curved corners, and the pine table where they have their meals.

The child can’t imagine how a man like the butcher or the dairyman could barge in on this, in this very kitchen, in this life of theirs, the life of this mother and her child, this particular life.

‘There isn’t room here,’ she says.

‘Don’t be silly, my darling, there’s plenty of room. We lived here all right before you were born, and we were very happy.’

And yet, as she says these words, happy is the last thing the mother seems to be.

The child doesn’t say anything else. It feels to her as if all of a sudden, mysteriously, the world has changed.

She’s called France, the child is, France like the country. But no one remembers that now. No one ever calls her by that name, even though it was chosen, duty-bound by the war. They just call her ‘the child’, that’s enough. As for calling her name to summon her, to make her come back, that never happens: the child is always there, close by, under her mother’s feet, or consumed with waiting for her. Sometimes, though, her mother gently calls her ‘darling’, ‘my darling’, and it’s not a summons but a tender form of address. She doesn’t pronounce her actual name. Doesn’t use it. It’s only on paper.

France. Like the country. This name she was given must be something her father decided, with a hint of patriotism, when he was setting off to war. The mother agreed to it, at the time. Now she’s forgotten. Doesn’t really like the name. So it’s a name that doesn’t exist. France doesn’t exist. The child is quite simply the child. Her mother’s child. For now it works. She’s only four and a half.

Of the outside world, the child still knows pretty much nothing. And very little about this war going on around them, her and her mother, so intimately and yet so mysteriously,
this war which is detaining a father she’s never met, this distant and apparently dreadful war. All the child knows of the war is the incomprehensible iron-like voice talking about it on the radio. The opaque comments her mother sometimes makes about it. That’s all.

The war, as far as the child is concerned, her personal war, the one she knows, is the shriek of air-raid warnings over Paris, the piercing siren sounds, their sad wails that make everyone scurry for shelter in the Métro and then, deep underground, they stay and wait, until another siren tells them to go home. The war is the sudden emptiness of the next-door apartment, the absence of the Lévys, whose children used to play with her. Led away one morning by shouting policemen. Because of the war, is all her mother said. And it’s frightening now walking past that mute doorway. The war is also the strange blue-black paint daubed over all the windows in the stairwell, so the planes dropping bombs can’t see our lights at night, apparently. That bluish half-light on the stairs fills your head with dreams and fears.

The restrictions, the ration tickets for food, the queues outside shops, all the things discussed by grown-ups, by women in their building talking among themselves, that’s the war too, the child knows it is, but it doesn’t really affect her. In fact she loves it when gas and electricity cuts sometimes mean her mother has to cook on a spirit stove which she painstakingly sets up on their little balcony.

And also the war means having those people dotted about the streets, those disturbing, booted characters dressed in dark green, people you have to hurry past, my darling, her mother says, and not say a word. They’re frightening and yet, or perhaps precisely because they are, the child thinks they’re beautiful.

Lastly, the war was those funny letters on shiny paper, folded into envelope shapes and covered with a filigree of different postmarks in green, red and black, letters her mother received from the prison camp. Before. Letters from her husband. There haven’t been any for a long time.

She’s never left Paris, the child hasn’t, except for once, about a year earlier, when she was three, for a holiday in Normandy with her mother and her grandmother: there was nothing left to eat in the city so, because of the child, we just had to leave, her mother says when she mentions the trip to neighbours. For a few months they lived in an old house on the banks of the Seine, a house surrounded by a garden, which the child remembers with a sense of wonderment loaded with mystery. She can still picture the splash of colour of a red-flowered plant, fuchsias, her mother said; she recalls the smell of leaves and branches being burned outside, the crackle of the flames; she remembers the peppery smell of washing being boiled on a stove in the garden; the creak of a pump with a handle that you cranked to produce a bubbling gush of sparkling water. She remembers other things too, strange things, but she’s been told she was dreaming, and her mother and grandmother have forbidden her to talk about them, to talk nonsense.

MARIE SIZUN is a prize-winning French author. She was born in 1940 and has taught literature in Paris, Germany and Belgium. She now lives in Paris. She has published seven novels and a memoir. Marie Sizun wrote her first novel, Her Father’s Daughter, at the age of 65. The book was long-listed for the Prix Femina.

ADRIANA HUNTER has translated over 50 books from French, including works by Agnès Desarthe, Véronique Ovalde and Hervé Le Tellier. She has translated three previous titles for Peirene: Beside the Sea by Véronique Olmi, for which she won the 2011 Scott Moncrieff Prize, Under The Tripoli Sky by Kamal Ben Hameda, and Reader for Hire by Raymond Jean. Adriana has been short-listed twice for the Independent Foreign Fiction Prize.