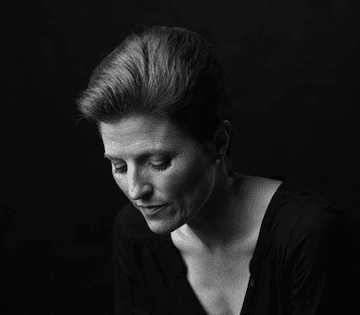 I thought of you this morning, our six years of letters,
and the time you kissed me in the Saturday schoolyard.
How we swung from side to side. Together, away.
It was October then, like it is every year, like it is now,
and that kiss tastes like green apples and leaves flaming
in the gathering dark. Days like today, I swear I hear
the small complaint the chains made when we moved apart.

Every morning, I do my five miles, running up over the ridge
and down around the slough. Once, a coyote followed
almost all the way, and I thought of you.

At Whole Foods this noon, the apples were so perfectly green,
my cart so full. I wish I could tell you, I am still the person
you thought you knew. Still the girl who likes things broken,
who lives her life along a bright and growing fissure,
who dances best with a man whose limp keeps time.

Six years of letters, and I barely ever saw your face,
but I remember your eyes, October blue,
and the small sigh it was to wait for you.

On Linkedin, I see you soldiered some again,
and I imagine you running in the Iraq desert dusk.
When we were young, you sent a tiny, Korean flower
from your base, pressed between two slips of paper you left blank.
I dreamt you lost your hands in war then cried
trying to lift a black veil from my face.

Dear Paul, who wrote of bones and broken bottles,
I often wake in night’s harrowed middle
and think how what you wished for me is real.
Sweet woman, you wrote, stay hungry. I am hungry.
Famished. So barren, I swell, fecund with ruin,
vacancy overflowing me as if I have no bounds.

After dinner, I push my last, late child on the swings
out back. My hands empty, then fill again with her
as the chains whine the long line of falling.

Red-tailed hawks make two wide wheels beyond my window, just as the doctor calls with the suspicion I’ve grown something in my gall bladder.

I want to be the tree the hawks land in. It’s old, and still puts out leaves each March, lets them fall in November.

Today, the leaves are chartreuse, frilled. The spirea nearby keeps making its wreaths of flowers. Brides keep making their promises, setting out in love’s flimsy conveyance, scattering petals.

My doctor’s from Slovakia and says the trouble is my reservoir of bile.

I imagine a lake, bilious and man-made, filled with what rises, scalding, in my throat. Here and there, stones make a path across the surface.

I imagine it’s possible to reach the other side.

FRANCESCA BELL’s poems appear in many journals, including New Ohio Review, North American Review, Poetry Northwest, Prairie Schooner, River Styx, Spillway, Tar River Poetry, and Zone 3. Her work has been nominated eight times for the Pushcart Prize, and she won the 2014 Neil Postman Award for Metaphor from Rattle. Her translations from Arabic, with Noor Nader Al Abed, appear in Berkeley Poetry Review, Circumference, and Laghoo. The manuscript for her first book has been a semi-finalist for the Philip Levine Prize and the Brittingham Prize, and a finalist for the Poetry Foundation’s Emily Dickinson Award, the May Swenson Prize, and Carnegie Mellon’s open submission period.