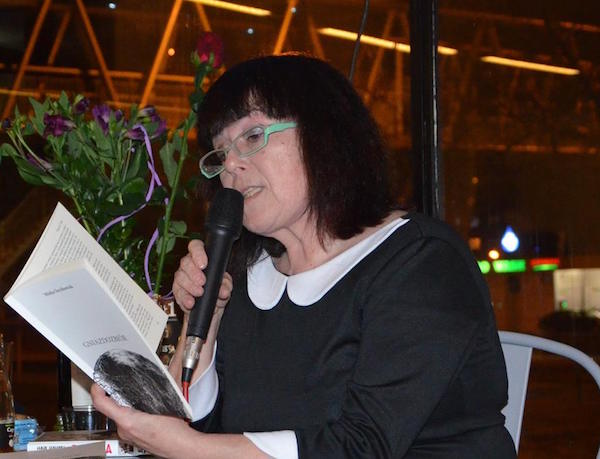 “I don’t believe my Antoś is dead,” Grandma said.

Kitchen full of black aunties sighed, outraged with Grandma’s lack of respect for the written word and the bloody stamp in the corner of the page. Nobody questioned the war death. She was the only one who put her foot down.

“I wouldn’t have dreamed him so,” she said. “He was acting out, pretending to be this Antichrist Hitler, making children laugh, pulling their noses. No! My Antek was alive in the dream, so he must be really alive. He might even be on his way back home right now.”

They were a mystery in this small village. He found her in the church choir. She was illiterate. He married her and taught letters using the prayer book. He fell in love with high-breasted Tolka, kind-hearted and shapely, with eyes like moist forget-me-nots. Grandpa was learned. He took a separate room, him and his suitcase full of books. Beautiful, noble, with his head full of hair. He was the master and the oracle.

After they got married Grandma forbid him to work in the fields.

“Antoś, you have a big wise head and I have strong hands. You will do your thing, I will do mine.”

She gave him two children. They loved them both very much, but each in a different way.

“Look, Antoś, how different our children are. Helusia stays away from the books and only wants to be in the fields. And she is so swift. She feeds the cattle, plucks chickens. Your Pietrek, on the other hand, has lost the cows again ‘cause you gave him a book to take to the meadow. He’s no good looking after the beasts.”

She was busy raking June hay in the fields by the woods then. She had her scarf pulled low on her forehead, to protect it from the sun. She looked longingly towards the trees, thinking about the shade. She only saw him when he stepped out onto a beaten track amongst the still green rye.

I’ve waited and waited for you, Antoś, she thought when he was already running towards her through the crop, shouting: “My Tola, my Tola!” and the echo repeated his words. Grandma fell to her knees and screamed towards the village, shaking her fist in the air:

“You see, you miserable assholes, he is back!? You have already buried my Antek, mourned him and told me to look for a new one, but the heart knows better.”

Hearing all that screaming Józia Walczak ran out, followed by Andzia Kowalik. Grandma was in tears, hugging gaunt Antek, but, being her, she quickly regained composure and straightaway started dishing out orders to the women:

“Go and ask all the people over. We need to celebrate Antek being alive!”

The women ran towards the village. And Grandma took the heavy canvas sack from Grandpa, grabbed him by the hand and led him home.

MIRKA SZYCHOWIAK is a Polish poet and short story writer. So far she has published four poetry collections (Człap story, Jeszcze się tu pokręcę, Proszę nie płakać and Gustaw znikąd). Jeszcze się tu pokręcę was nominated for the Nike Award (Polish equivalent of the Booker Prize) in 2011. Szychowiak was also awarded numerous other literary prizes in Poland. Her poems have been translated into English and included in the Free Over Blood anthology published by Off_Press. She has just published her first short story collection called Gniazdozbiór. She lives in Księżyce near Wrocław in Poland.