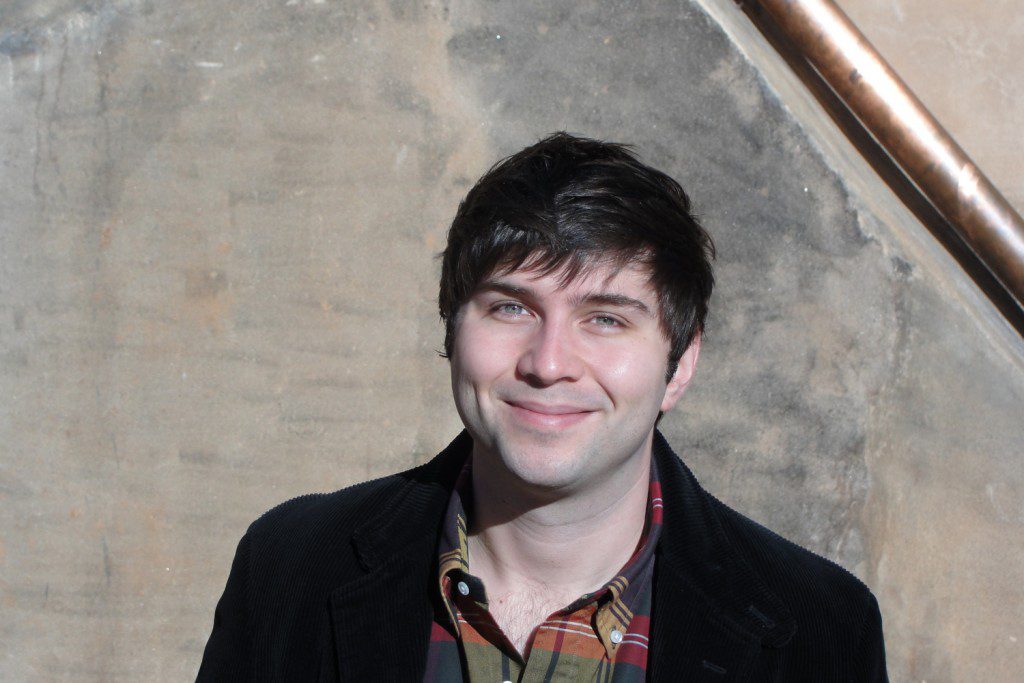 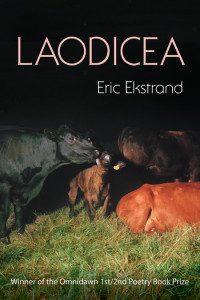 The irreconcilability of two visions – yours and mine, yours and Erik Ekstrand’s, the irreconcilability between you and his poems – where does it come from? What is the nature of and what are the limits to this rupture between what is envisioned, what is written on paper, and what is received by readers? Ekstrand’s collection Laodicea takes such questions as its major theme.

Ekstrand does not hope to create a self-sustainable poetic world, nor does he want to overvalue any vision as better, which would only allegorize the irreconcilability. On the contrary, this collection accentuates the fact that what constitutes a poem is actually the incommensurable bipolarity that stands as an interface between poet and reader. Ekstrand’s poetry seems bipolar, Siamese, bifurcated, and thus irreconcilable precisely because the author is fully aware of the dichotomy which he not only incorporates within the poems but also uses to create the potential for an interaction between the poem and the reader. In so doing, Ekstrand utilizes three fundamental formal devices – the presence of the dialogical “you” which challenges the reader; metatextuality by which he reflects upon the poem’s bipolar character; and an appeal for the fulfilment of the poem’s abstractly circumscribed imagery.

The reader’s engagement develops gradually throughout the book, which is divided into four sections. Each pursues the course of its imagery from abstract to personal, from ancient to present, from the blurredly chaotic to the self-actualized. Thus sometimes seemingly accidental, sometimes clearly contextual and personal images analogize Ekstrand’s prime notion of poetry, which could be compared to “the Nashville Parthenon” in the poem “Hannah’s Strong Features:”

I’m writing to you
about our friendship
for which I’m offering,
as a metaphor
the Nashville Parthenon
because it’s hilarious, large
and sad
Only, please, read
its purposelessness and dimensions
from your body.
…

which is like the unsaid things
between us. Hannah, I am
indwelled by two gods:
Compulsion and Compulsion

The “hilarious” mental ruins of the “Parthenon” that once held the architecture of its reality together, ruins that might give an impression of “purposelessness” unless the columns of the poems are rebuilt in the eyes or “read from the body” of the one to whom this poem is dedicated, embody the dual character of Ekstrand’s work. This duality is amplified by the split which follows the difference between the narrator’s indefinite vision and the addressee’s imagination; it involves and offers, on one hand, the residuum of images, of reality experienced and, on the other, the explicit invitation to get involved. This is exemplified in “Every Aster as a Herald, Every Child a First Thing:”

To begin with
there is a landscape

with intervals of wind
collectors that are angels

with turbines. This suggests
the divinity of man. Imagine it:

a real landscape that one
could throw rocks into.

Ekstrand deconstructs his experience, be it historical, philosophical or profoundly personal, so the reader concords with the about-to-go-extinct species of an image on the brim of its line or stanza, and thus fulfils it with his empathy and understanding for its destitute state. For were it not for us “imagining,” there would be blatantly no “landscape that one / could throw rocks into.”

Metatextuality is the most important feature of these poems, as it consecrates some of the lines to the texts themselves and foreshadows the purpose of the texts while implying the process of writing and its actualization by readers. Ekstrand embraces it completely; its position is remarkable precisely because he is able to place it within the structure of stanzas, whereby it might not only perplex the reader but also explicate the reader’s impending urge to fulfil its half-abandoned vista by one’s projection. For example, in the poem titled “WS Graham” we see that the sudden metatextual shift changes the overall perspective and the progression of the poem is mirrored, questioned, and made dehiscent, by which it is simplified for the addressee to participate from the vantage point of the absenting author:

This book has not been purposely
made for any reason.

It has made itself by circumstances.
It has aimed at nobody at all.

‘What happens in the book.’
It is self-actualization like you.

However, it is not only the highlighting of the tentative content that the poems provide and force one to confront.

There is also a poetic voice, aiming beyond the formal limestone which is entailed both in the metatextual intrusions and ordinary stanzas challenging the one who is outside the structure, the one who is supposed to effectuate the potential dialogue trespassing to and fro the boundary between the poem and oneself. The deictic act is done by a simple personal pronoun “you.” By “you,” the recipient is directly encouraged to take part in and to recreate the missing concreteness expressed by the pronoun. The etymology of the word pro-noun (replacing a noun with a more general device) itself may serve emblematically in this respect too and may emphasize its open structure; as exemplified in the poem “Janus:”

The word “culture”
itself does not seem to exist.
It is like a Janus
that is always
looking at you
at the same time
it looks away
from the corners of either
one of two
sets of eyes.

you look at the place
where the two
faces join
and just stare at it.

‘What happens in the book.’
It is self-actualization like you.

Hence our approach to this book is based on the condition that we accept the challenge which is determined by the dichotomy of Ekstrand’s vision versus the reader’s.

Ekstrand’s Laodicea is built on dichotomous ground; discerning the dichotomy has two phases. Firstly, recognizing the indefiniteness of the images and words and, secondly, recognizing their interactive nature. This is emphasized not only by the metatextual shifts but also by the constant insistence upon readers’ engagement in the poems, for Ekstrand’s poems do not consist of things and ideas presented but things and ideas transformable. The book’s most conspicuous motivation is to make poetry happen between “you” and the poem; that is to say where the line ends, your imagination cannot idle and where, deliberately, the words do not say it all, it is the reader’s mind that finishes the thought.