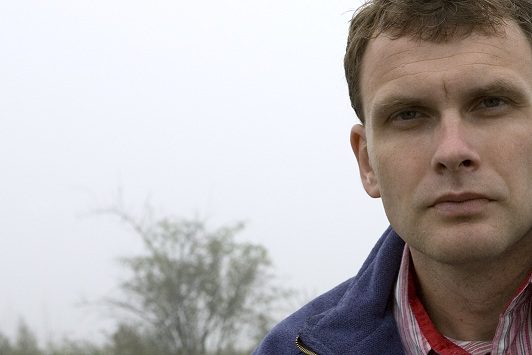 This is not a boundary, nothing begins here and apparently nothing ends,
it seems a continuation of the same by different means, a liminal space,
that observes and offers altogether nothing; it’s not even in the thesaurus
on page three hundred eleven,
it is the yearning air of the world after evacuation,
humid littoral boredom, as though the movers’ nerves had given out,
discarded stage sets, rafters, ropes, fabrics, stakes hastily cast away, a tire clothed in seaweed,
and the grass above the surface frantically snatches the residual light and beneath the surface
imitates Solaris; where one shore is lacking it is likely that there is no other,
today the entire eastern coast was wrecked here for your pleasure, the whole old world is mildewing,
and while the sound of a siren, incomprehensibly loud, passes above your head,
you turn your back as though it were no concern of yours that there are men overboard,
that there is no entrance to paradise: not yesterday, nor tomorrow, nor today.

Outlining on a chalky blackboard
an overview of the perfective, yet again,

of some forsaken painting in a cave,
when momentary eye contact with the post-inert students

confirms for certain
that even a fictional grammatical tense will provide no cover,

and as the pencils sketch out another senseless sentence,
he leans out the classroom’s only window

and with the formation of rocking ducks suddenly mingles
an arabesque of bright arms and an almost human laughter.

Parting, practicing parting, gradually mastering the technique,
like taking off your last clothes and purposely remaining helpless and naked,

and waking up in the morning, aesthetically entangled in the sheets,
with your skin miraculously healed in some places,

letting go of this face, and of course, this one too, ignoring that voice,
muffling this intonation, waving at the train with a burning in your stomach,

writing nothing and drily erasing the entire card,
crying a bit every time at that scene in Lost in Translation,

letting it slowly tick by, disappear, be extinguished, walk away,
until a voice pierces through your dream, and you feel a gust of air, the crape of ear, the chalk of eyelash,

light clutching your forehead, and perhaps the slight pressure of a touch,
and you rise with a corroded body, in which an insatiable cold is growing.

ŠTĚPÁN NOSEK has published two collections of poetry, Negativ (2003) and Na svobodě (2011). He is a member of the editorial board of Souvislosti review and poetry editor of Opus Publishers. In 2002 and 2003 he studied modern Irish literature as a postgraduate student at Trinity College, Dublin. He has published two books of translations, Conor O’Callaghan’s Seatown (2004, together with Tomáš Fürstenzeller) and Wallace Stevens’s Adagia (2008).

KIRSTEN LODGE is Associate Professor of English and Humanities and the Humanities Program Coordinator at Midwestern State University in northern Texas. She holds a Ph.D. in Russian and Czech Language and Literature from Columbia University, and she lived in the Czech Republic for seven years. Her recent translations include Dostoevsky’s Notes from the Underground (Broadview Press, 2014) and Karásek’s A Gothic Soul (Twisted Spoon Press, 2015). She is currently working on a new edition of Tolstoy’s short stories for Broadview Press.