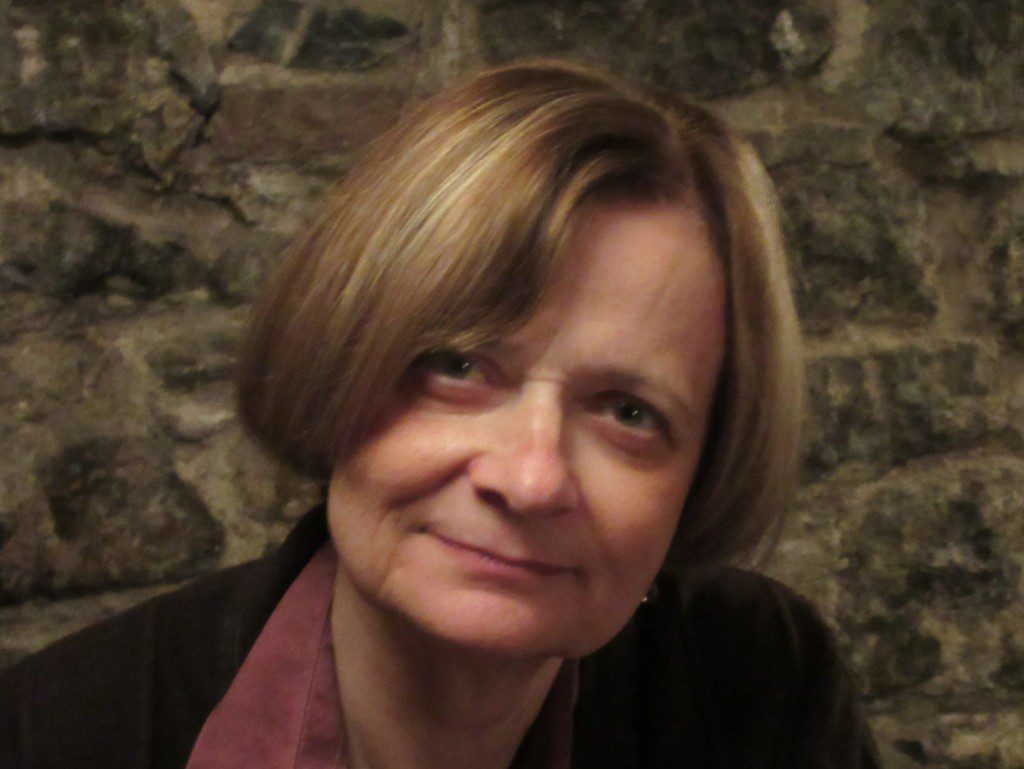 A KINGDOM OF SOULS

I am the revolution in the shops — I am taking down the German signboards. Mr Poustka, the grocer, takes down his sign, and after him Mr Širc, the butcher, and after him Mr Trnka, the delicatessen owner, and after him Mr Bubeník, the pub owner (he’s the one whose pub Alice and Georgie would go to for sodas) — then, for a long time, nobody — until finally the very last one, doubting Thomas Hamza, the tobacconist, takes his sign down too. And only then, after the time of taking down signs, after the period of changing names (because names are of primary importance in every revolution), I begin to set up barricades. — One barricade on Foch Avenue (formerly Jungmann, later Schwerin, then Stalin, finally Vinohradská Avenue), another barricade in Kouřim Street, and a very small barricade in Zásmuky Lane. Then, for the next three days, shots are fired from the cemetery in the direction of the school, and from the school back in the direction of the cemetery. For three days Jan Köck (he’s Czech, not a German) sleeps next to his glass cabinet with Bohemian crystal. The crystal rings softly, but endures. Mr Köck endures too.

I am also the revolution in the cellars, the hidden one. I’m in charge of a purge separating the wheat from the chaff. I ask the chaff to step forward and then gather and transport them to Hagibor, formerly a Jewish Home, after that a German torture chamber. Instruments of torture are still there, left behind by the Germans — racks for torturing Jews, Grandfather Davidovič among them, and wheels for breaking Jews’ limbs one at a time, including those of Grandfather Davidovič (he shouldn’t have been going to Mrs Soška’s). And Mr Böhm, chaff Böhm, steps forward in the cellar, and so does chaff Vinkler (now actually Winkler) — all the other tenants, pure wheat every one of them, gasp in astonishment. Who would believe that Mr Vinkler, that nice gentleman, is a German? Even Mr Vinkler, chaff Winkler, will be taken to Hagibor by me, the revolution, currently embodied in Caretaker Briar. Mr Vinkler, chaff Winkler, is racked, the limbs of Mr Vinkler, of chaff Winkler, are broken, one at a time. — Chaff is chaff, says Caretaker Briar, himself also pure wheat, as he waves a red-blue-and-white flag atop a truck that shuttles to and from Hagibor.

I am the revolution and I am victorious at Olšany, I am victorious in Lobkowicz Square (it will become Chapaev Square), I am victorious in Kouřim Street and I am even victorious in the narrow Zásmuky Lane. Female chaff remove dead bodies from the sidewalk, bodies flushed out of houses during the revolution, they’re sweeping away the revolutionary residue. Nearby, in front of the pharmacy, in whose shiny dark façade Georgie Briar will admire his own reflection, loiters Mr Köck, pure wheat, not chaff, despite his weed-like name. Suddenly Mr Köck picks up a wooden beam and starts to hit Mrs Vinkler, chaff Winkler, on the head. Tenants at windows facing the square, and also Mr Hamza who has to lean quite far out in order to see all the way to the pharmacy, gasp in astonishment: Who would have expected this from Mr Köck, of all people, Mr Köck who plays the cello at the National Theatre, who would believe it’s the same Mr Köck who just a few days ago greeted Mrs Vinkler at the tobacconist’s with ‘I kiss your hand, madam’?

I am the revolution, the purifying element and the distinguishing element, the transforming element and the reversing element. Behold Caretaker Briar, only yesterday he was pointing his finger at the cemetery wall (merely concerned for the well-being and reputation of the block of flats he’s in charge of), but today he attends to the revolution, waving its flag up high. Behold doubting Thomas Hamza, only yesterday he was filled with uncertainty, but now, having thrust his hand into the revolution’s wound, he recites a prayer in the presence of every customer: Our Revolution, Thy will be done. Behold the body (somewhat fat) and the blood of Mr Köck. Only yesterday… but today, despite his weed-like name, Mr Köck (or is it Mr Cockle by now?) is undergoing the most miraculous of all revolutionary reincarnations. And the nation receives the body and blood of Mr Köck, for the nation professes the faith that receives the Sacrament in both kinds.

Residing in the pantry, Grandmother and Grandfather Davidovič only experience the revolution filtered through the lightwell. For them, the revolution is connected with the body that appeared one day in the middle of the pantry floor, and which Grandmother Davidovič later dragged with great difficulty under the bed, because it was in her way. They’re convinced the revolution with which the war had ended (at least around here at Olšany) was actually the quarrel that took place in the flat, a quarrel between a German court clerk and a Czech pastor, resulting in the death of one of them. They considered the noise from the street, which for several days they heard distantly through the lightwell, to be merely the aftermath of that row.

— I just don’t understand, Grandmother Davidovič says to Grandfather Davidovič on 9 May, 1945, why nobody seems to be interested in this dead man here. With all the commotion they must have forgotten about him.

Herr Hergesell, whose soul is huddling in the farthest corner under the bed, realizes they’re talking about him and huddles more tightly. It was not pleasant to discover himself so utterly defenceless in his present state, and totally at the mercy of the two Jews plotting to get rid of him. Incidentally, he also thought that the street shooting was directly connected with him. He is troubled by the realization that even if somebody should come upstairs into the pantry, only his body would be taken away, while his soul would be left to that malicious old couple. He has no choice but to try and escape on his own. Herr Hergesell peeks out from under the bed but immediately crawls back upon encountering Grandfather Davidovič’s glare.

— We need his company like the dickens, Grandfather Davidovič says. — He’ll settle in for good and eat our bread. Herr Hergesell under the bed is quiet as a mouse. — What if Alice brings Pavel Santner today? He’d never set foot in here again.

Saddened by it all, Grandmother Davidovič finally comes up with a brilliant idea. How about trying to open the lightwell window, maybe the unpleasant guest would fly out through there. And indeed, as soon as Herr Hergesell feels the air (mixed with a bit of gunpowder smoke) he cautiously slithers out from under the bed, shakes off the dust and lifts off into the lightwell.

Flying is a new and strange experience for him, and so is looking down from a bird’s or rather a soul’s perspective. And what he sees down below is strange too. Barricades of junk block the streets, dead bodies sprawl on the pavement, and tanks move slowly through the city, from up high they look like beetles. And then he spots a lanky young man coming down the street along the Olšany Cemetery and entering the very house Herr Hergesell has just left. It must be Pavel Santner, the one they had talked about.

And it is indeed Pavel Santner. He walks past Caretaker Briar, who is standing in the hallway clad in a mouse-grey overcoat, and goes up to the fifth floor. And things go exactly as Grandfather Davidovič had feared. Pavel Santner enters the pantry but promptly backs out and hurries away. Grandfather Davidovič was right to think he would be put off. How could he, under such circumstances, ask for Alice’s hand? This way all will again be postponed until God knows when. What on earth will they tell Alice when she returns? She has been so looking forward to this moment.

And now Alice is here, she’s rushing into the pantry all out of breath. She has on her best dress, its white collar is a little wrinkled. Of course Alice knows who has been here. And they couldn’t get Pavel Santner to stay even for a moment? But how could they have? Alice feels like bursting into tears but is ashamed to do so before Grandfather and Grandmother. — Come now, dearie, Grandmother Davidovič tries to console her, since you’ve waited all through the war, you can wait a little while longer. But Alice knows that by then she’ll have grown old and ugly like Grandmother Davidovič, and Pavel Santner won’t want her any more.

DANIELA HODROVÁ has pursued a dual career as a prominent writer of fiction and a prolific literary scholar. The recipient of the Czech State Prize for Literature in 2011 and the international Franz Kafka Prize in 2012, Hodrová is only the second woman to receive these awards. Her novels have been translated into French, German, English, Italian, Spanish, Polish, Bulgarian, Swedish, Norwegian and Dutch. Her alternative guide to Prague, Prague. I see a city…, was first published in English in 2011 by Jantar Publishing.

VÉRONIQUE FIRKUSNY was born in Switzerland to Czech parents Rudolf and Tatiana Firkusny, and grew up trilingual in Czech, English and French. Passionate about literature, languages and music, she has worked on a number of literary translations from Czech to English, including works by Michal Ajvaz and Daniela Fischerová. She lives in New York City, where she also works with singers as a Czech diction coach.

ELENA SOKOL is a second-generation Czech-American, raised in Chicago by her immigrant grandparents and bilingual mother, while her father served in World War II. As a teenager, she began to travel regularly to Czechoslovakia to visit relatives there. She is Professor Emerita of Russian Studies at The College of Wooster, Ohio. Elena has published articles on the prose of eight major Czech women writers of the past three decades and is currently working on a book devoted to them.