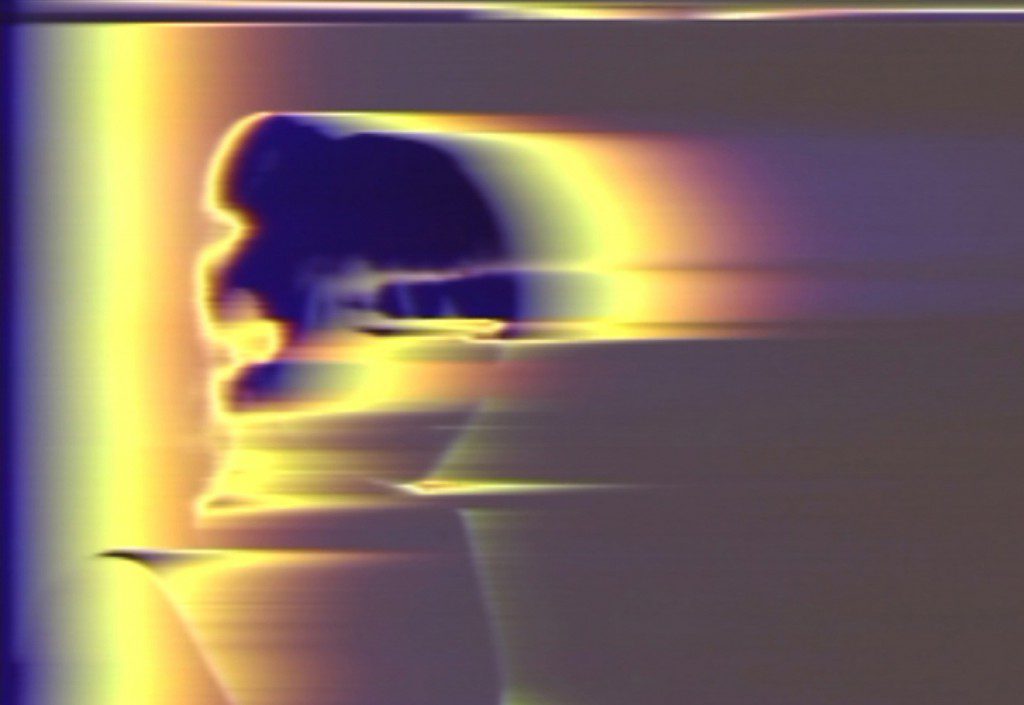 SABRINA RATTÉ (Canada, 1982) is a Montréal-based video artist. Using a unique combination of analog video synthesizers and mixers, and digital editing software, Ratté creates surreal and moving future-scapes that confuse the boundary between architectural space, landscape and ones own mindscape.  Parallel to her solo work, Ratté is the visual part of Le Révélateur, a sound and video collaboration with electronic music composer, Roger Tellier-Craig.

I caught up with Sabrina before she left to test her recent projections for an upcoming live show at Montréal’s Musée d’art contemporain de Montreal. – Jessica Mensch

B O D Y: You recently collaborated with Roger Tellier-Craig on Common Areas, a video and sound installation for the Museum of Moving Image in Queens, NY. At the opening you mentioned you were interested in creating a corporate looking interior. Can you tell me about this?

Sabrina Ratté: Yes, that’ exactly right. I am inspired a lot by architecture, and I seem to have a special fascination for all kinds of corporate spaces. I am interested in finding a personal angle to these formatted constructions. While making Common Areas, I was researching a lot about hotel suites, penthouses and terraces, and I had a slight obsession with sliding doors… But even though my references and inspirations can be concrete at times, it is important to me that my videos remain relatively abstract, so that these references won’t come across automatically. I am interested in suggesting an atmosphere or vague impressions of architectural shapes, while leaving space for interpretation.

B O D Y: It’s interesting you mention sliding glass doors. The movement of sliding doors is generally slow and even – controlled, which brings to mind the pacing of Common Areas. The pacing of your works often feels measured, what determines this for you?

Sabrina Ratté: Sliding doors are interesting to me because I perceive them as a link between architecture and video art; they remind me of the frame of the video image where the movement of opening and closing the doors is reminiscent of the idea of video “wipes”. Wipes are transition presets included in editing software which I like to use a lot, and I think that my fascination for these presets is similar in some ways to the one I have with corporate spaces; both are impersonal and formal, thus fertile for personal re-interpretation…

But to get back more specifically to your question, the editing rhythm changes a lot from project to project, depending on whether I work with music or not. For example, for Common Areas, Roger composed the music after I finished the edit, so the rhythm comes from my own personal pace. Furthermore, since the video was going to be shown as a large scale installation in the lobby of the Museum of the Moving Image, I wanted to create something hypnotic, that would merge with the architecture of the space while setting a specific mood, hence the slow and controlled rythm. But in general, the pace of my videos is very intuitive, and maybe the fact that I’ve been working a lot with music helps me in some ways too.

B O D Y: I’m interested in the perspective you adopt– the omniscient, mechanical eye of the camera…Its difficult to frame this question because there is no camera in the context of your work – the images are for the most part generated internally with your video synthesizer. Does this present a unique problem for you in terms creating a coherent space, or a point of view?

Sabrina Ratté: I learned how to compose an image from photography and from recording “reality” with a video camera. It is only since the last few years that I generate everything electronically. Having experienced both of these ways of working with video, I find that the decisions I take regarding the composition of an image remain very similar. After all, it is contained within a specific frame, which leads to similar strategies in terms of composition. So even though the way of producing content for my images is different, my approach to its composition is very similar in both situations. Only the possibilities seem more varied and open to me. Also I believe that there is always a point of view, no matter if the image is coming from a camera recorder, or from electronically generated images.

B O D Y:  This leads me to my next question: Undervolt & Co. recently commissioned you to create a series of videos. The senior editor at Undervolt, Nicholas O’Brien, wrote – “Where others create depth through recording or simulating hallways and tunnels, Ratte bends the signal of the video itself to carve out corridors of an undetermined distance.” Can you break this down for me?

Sabrina Ratté: Nicholas has incredible writing skills! When I read this particular sentence, I immediately think of Habitat, (https://vimeo.com/105832358), as it seems to be describing what is actually happening in that video… Without getting too technical, I could say that Habitat is made with a “patch” that I did with my modular video synthesizer that allows me to stretch the image when I turn certain knobs, which gives this effect of depth. The three dimensional effect is also created by the different intensities of light and colors, which are electronically generated as well …

B O D Y: Thanks for clarifying. You acquired an LZX Video Synthesizer in 2012, how did this change your work?

Sabrina Ratté: When I acquired my LZX, I started generating all of my images with this tool rather than recording “reality”. It was a radical change, but it was made gradually and has allowed me to explore a whole new aspect of my medium. The learning curve was long for me, but how worth it! It also reinforced certain intentions that I had, like mixing different aesthetics from different eras to create something that is timeless… At least, this is what I aim to do! The LZX is the main tool I use to generate images, but I mix it with other techniques as well.

I did get an AMIGA computer recently, but I didn’t have much time to experiment with it yet. But each time I acquire a new tool, the process is quite long to find a way to incorporate these new possibilities into my work. I hope to be able to include more electronic drawings into my work eventually.

B O D Y: Scrolling through your photographic blog, I see a lot of images of interior corporate spaces – scrappy oases complete with potted shrubs, miniature waterfalls, unnatural lighting and minimalist geometrical furniture. It brought to mind what you said in an earlier interview for Rhizome in reference to a project you were working on involving Montreal’s public parks: “The way everything is calculated provides an almost surreal experience; an idealized version of life, too clean and too perfect. “. Is this idea – the disruptive presence of the idealized vision in reality, something that you think about?

Sabrina Ratté: Yes, I think about idealization in all of its forms all the time. I believe that this is a tendency that is present in most (if not all) aspects of human life. It’s the dream versus reality, theory versus experience, utopia, dystopia and something in between… it’s a tension that I feel continuously and that I am interested in exploring in my work. I feel that corporate spaces like shopping malls, office buildings, and hotels as well as parks and many other human constructions convey this weird ambiguous atmosphere that oscillates between utopia and dystopia. Utopia and dystopia are both a way to idealize “reality”, two extremes that seem to meet in these spaces. Somehow, I am constantly attracted to these ideas…Living in a dream that is in fact a nightmare and vice-versa. And the ambiguous nature of “reality” …