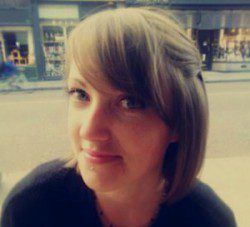 after the Russian scientist who in 1974 survived
200,000 rads through his head in a particle accelerator accident

Anatoli, I read that you felt no pain
when that arrow of light entered your head
brighter than a thousand suns
and fused the wiring. A line on the diagram shows

the maxillary-occipital arc of the beam
bisecting your swollen cheekbone,
tunnelling through brain to emerge
clean from the back of your head.

Did it relinquish matter, or subtract it?
After all, this is high-energy physics!
These ghost numbers are volatile,
the whole rarely the sum of its parts.

behind your eyes – you cannot say what was taken,
what was left behind. Nor how far, Anatoli, that spear
of protons may have travelled, carrying
something of you to the deepest reaches of the universe.

and I’m writing a postcard in bad French
lifted from the Rough Guide. The bees

are winding the water, their drone is a headache,
a backdrop of static, and I try to write Love

I am thinking of you, and the bees are drowning
in the pool. The whole surface is a ballroom,

the tiny pieces move and coruscate and the air
is sticky with humming. Behind my sunglasses

I am a bee in the water. Below me, only
the arctic plane of the tiles. Above, a reliquary –

the slow machine of living wings and dying,
the water, the fantastic prism of the sun.

ii
Their cycloptic presence does nothing
for my sleep. They are two-armed, like us.

They are armed with their own sharp munitions,
bullets beetle-brown and numerous.

They will unlatch my wooden shutters before
I reach the phone (and who to call, at that?)

nothing safe can look like this.
The fear is of what the field

might hide, you suggest, of the gunman
creeping undetected through the stalks,

of the biting animal caved in all that
earthy, mottled underworld.

But you were not there yesterday when,
as I walked past that upright army,

that silent horde, their backs turned to me,
a single flower rotated on its stem.

That fathomless pupil watched me pass,
looked deep inside me on that empty road
and passed judgement on my life.

Of all your architecture this I loved the most
the cavern of the inturned rook, the cloistered space
where pipistrelles roost and rumble in the dark,
the uplit statuary nook where I knelt down

nightly in the building’s candleglow and quiet.
In this most hidden place I’ve spoken tongues
have whispered to the icon when alone and found
an answering echo in the curl of bone

at the outside-inside Möbius strip of flesh,
my Escher-angled room or spit-cup nest
where the whole structure comes together
here at the finishing knot, an argument for design

I make in a church of empty light
which hears it all, gives nothing in reply.

MARTHA SPRACKLAND grew up on Merseyside and lived in Madrid before taking an MA at Lancaster University. Twice a Foyle Young Poet of the Year, her work has appeared in Poetry Review, LRB, Poetry London, the Salt Book of Younger Poets and Best British Poetry 2014, amongst other places. She was co-founder and Poetry Editor of Cake magazine, and is now Assistant Poetry Editor at Faber & Faber. In 2014 she received an Eric Gregory Award.

Poem in The Quietus