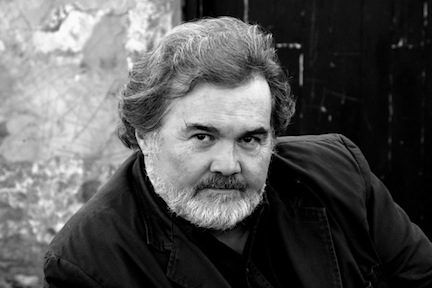 We say Next time we’ll go away.
But then the winter happens, like a secret

We’ve to keep yet never understand,
As daylight turns to cinema once more:

A lustrous darkness deep in ice-age cold,
And the print in need of restoration

Starting to consume itself
With snowfall where no snow is falling now.

Or could it be a cloud of sparrows, dancing
In the bare hedge that this gale of light

Is seeking to uproot? Let it be sparrows, then,
Still dancing in the blazing hedge,

Their tender fury and their fall,
Because it snows, because it burns.

The steersman is lost and the hole he has made
In the water has swallowed his cry and healed over.
The curious fishes must make what they can
From his bones, or the great whale may vomit him up
On the shore, at the feet of a queen who stands
Waiting and waiting through moon after moon
With no news and no rumours but only her sorrow
For company. Maritime cities are burned
To the waterline, plague passes north
Like an army of phantoms by night, and volcanoes
Roar out from Pole to equator, while the stones of the world
Break open and swallow each other, and darkness
Closes over the face of the water, and new seas arise
From the wreckage of empires, and settle, and still.

At the third stroke the time will be nothing at all,
The time of un-dreaming, when rivers and language
Are locked in the ice, when the eye and the ear have grown
Weary of seeing and hearing. The play and the music are over.
The desert gives way to the desert and heaven’s high quarrels
Have found a new venue. The gods never speak of us.
We must wake into this poisoned sleep and gather
Our rag-and-bone birthright about us and wait
Until somebody hears herself talking and says it again
And somebody beats on a drum with the bone of an auroch
And finds that the rhythm becomes an opinion
And then with the same bone sketches a line in the sand
As the blizzards melt back to the poles and a fire is lit
That all men will know of, and worship, or fear.

So many waves of desire, dynasties, fetishes,
Novel barbarians out of the inexhaustible East.
Inquisitors are always on their way, and at one time
All this was just fields, where the cemeteries grow
From the bones of the infantry, forests of marble
In which we may seek after wisdom, pursuing
The fugitive spirit of things as it slips through the silent
Ranks of those King Death conscripted for a host
The like of which has not been seen by men or gods –
And in whose vanguard, Goddess, you and I both ride
With fire and sword, because it must be so:
The ocean and the mountain and the fire at the core
Demand it. Why else do we lay siege once more to Troy
Or Carthage, or whatever this place will be called?

SEAN O’BRIEN is a UK poet, critic, broadcaster, anthologist and editor. He grew up in Hull, England, and lives in Newcastle upon Tyne. He is Professor of Creative Writing at Newcastle University and a Fellow of the Royal Society of Literature. His poetry collection, The Drowned Book, was, in 2007, the first book to win both the Forward and T S Eliot Prizes. A book of short stories, The Silence Room, was published in 2008; Afterlife, his first novel, and Night Train, a collaborative work of poetry and drawings with Northumberland artist Birtley Aris, followed in 2009. His version of Dante’s Inferno was published in 2006, and the bilingual anthology, The Third Shore was published simultaneously in Bristol and Shanghai in 2013. His most recent individual poetry collection, November, was shortlisted for the 2011 T S Eliot Prize, the Forward Prize, the Costa Poetry Award and the Griffin International Poetry Prize, and his Collected Poems was published in 2012. Train Songs, an anthology of the poetry of the railways, edited with Don Paterson, appeared in 2013 and The River Road, new and selected poems in a bilingual edition, was published in Beijing in 2014. A new collection of poems, The Beautiful Librarians, appears in 2015, as does his second novel, Once Again Assembled Here, and his translations from the Portuguese, with Daniel Hahn, of a selection of the poems of Cape Verdean poet, Corsino Fortes.