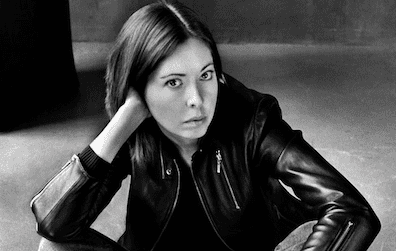 Sarah Manguso’s second book of poetry, Siste Viator, is a book which makes writing poetry look easy. When punk music exploded into the public consciousness, or early electronic music, fans felt that here was something they could replicate themselves, in their own bedrooms, and began to form their own bands.

Siste Viator has that same cultish cachet, the certain but illusive feeling that anything is possible in a poem, and look, here’s a blueprint! for writing poems in which a woman can make a coat out of the number zero or fuck with the wickedest man in the world or snap off a piece of Italy. Manguso claims such powers for herself and it looks so easy the danger is to think that anyone could do this:

I thought I saw how the story got told.
And I gave it everything.

Blind I listen to all the little sounds.
How pretty they are.
I arrive and arrive.
Look–I am the statue who thinks it’s running.

There is an indigo shade to the poems, made darker by humour and by Manguso’s willingness to go wherever she desires, or wherever the poem desires; by the leaps of imagination she undertakes from one moment to the next:

There’s a point to choosing a form and filling it in completely.

Sometimes I’m sewing a shirt with the sleeves stitched shut.

How women endure being women is beyond my comprehension…

…When I gave birth to my death, my death thanked me.

Manguso’s totemic images appear throughout the book, wild and apocalyptic: water, fire, horses, mountains, love; almost biblical in the way they take upon themselves the weight of history and of portent.

The poems are simple yet not simplistic, allowing the reader to walk with Manguso along her charred little paths:

A good horse runs even at the shadow of the whip.
But we are not good horses.
We bolt. We stand still in bad weather.
…We are relied on.
But I don’t know who knows that bad secret.
I don’t see who sits astride my back,
Who cuts my flank so lovingly on our way to the dark mountain.

Biblical and yes, also apocalyptic, Manguso alludes to civic as well as personal death. It is perhaps not quite correct to say she embraces these changes and transformations but she is willing to work with them, to give them a chance to prove themselves the way forward:

Thanks, big-ass blonde!
Weed away! Let the light burn you,
The sun distract you from the blazing world!
For death is coming and love will be new!

I don’t mind when no mercy comes
Or when it comes in the form of my mad self
Running at me. I am not asking for mercy.

(from “Asking For More”)

The new age came. I invited it inside.

I waited, my mouth full of pins.

You seem to be making a quilt, it said.

…When the quilt is finished i will get under it with you–together we
will bring about a new age! But first you will need to summon
the quilt making fire…

(from “The Only Thing To Pray For Is Fire”)

The enemy comes, and in poem after poem Manguso engages with him, chats, allows herself to be thrashed or nullified, held safe in her halo of Mangusian fire which cleanses and cauterizes the wounds she bares.

It’s a brave and helpless book and within the helplessness lies Manguso’s strength. She knows that she cannot be destroyed and so allows herself to bend with the weight of outside forces. Love saves as it destroys. Here are poems in which the protagonist is tired of fighting and sits on the horse to see where it will take her, trusting in her totemic images and symbols.

Indeed, this is a heavily symbolic book of poetry which brings to mind the more successful poems of Robert Bly. Like Bly, she shares a love of strange and portentous imagery, the exclamation mark, dark humour and an acceptance of death as a state of being to be as feared and desired as life. There is more than a touch of the recently deceased Russell Edson, too, in Manguso’s willingness to follow her little black fairytales wherever they may go, and to laugh in their faces as she does so.

The poems in Siste Viator employ capital letters at the beginning of each line, a practice often sneered at now, in the 21st century. The claim is that such a stylistic mode adds nothing to a poem, cannot be accounted for or disturbs the eye during the reading of poems. However, this capitilization lends these poems an air of permanence, of biblical significance, of having been carved into stone and left for future generations. They pronounce like strange laws to be upheld in a foreign land which is your own.

Siste Viator is a book to be carefully passed on to your people in the same manner you’d give out the location of a secret beer-orchard in the city centre. Be wary.

Manguso’s is a voice you could become obsessed with.