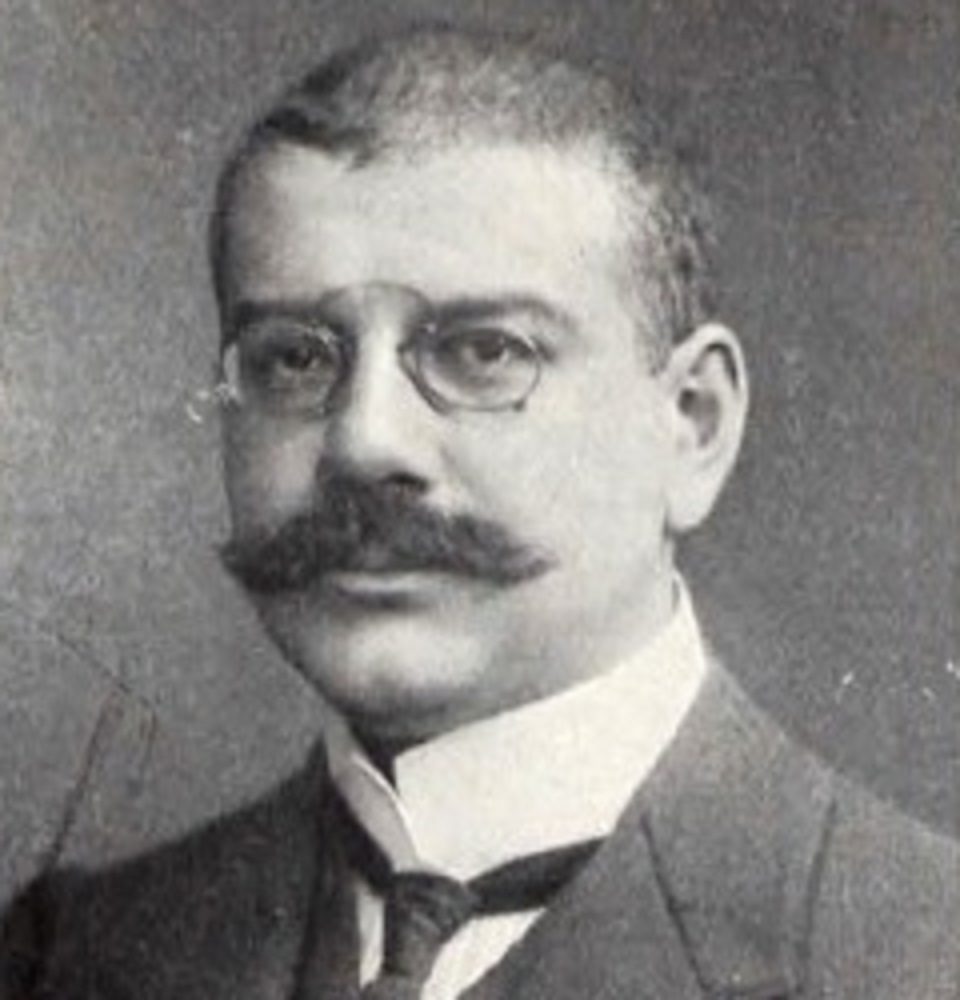 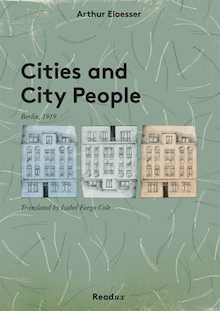 Cities and City People: Berlin, 1919
Essays by Arthur Eloesser
Translated from the German by Isabel Cole
Published by Readux Books

Berlin is Europe’s youngest city, now evolving at a truly American pace, and what took other cities centuries, we have had to achieve in decades. It would be well worth keeping a journal on the condensed, rapid development of a young giant of such ruthless energy and intelligence. But rather than record public affairs, sensational incidents, scandals, trials, exhibitions, premieres, and hotel openings, one ought to listen more keenly to the inner voices of a communal spirit, a communal feeling, an individuality taking form for the second time. Today’s Berlin cannot yet possess a physiognomy as tangible, as profoundly marked as the old cities with their entrenched proclivities and customs. Certainly our city was already a cohesive individuality, an organism whose limbs moved in concert, even back when it aspired to be no more than Prussian capital and royal seat. When the bourgeoisie still lunched regularly at one, when the populace set out from the eastern gates to stroll Unter den Linden for the obligatory hour, it kept the same direction, the same pace. Having viewed the changing of the guard, greeted a few figures from the court, admired a dozen riders and a dozen and a half equipages in the Tiergarten, one headed back—on foot, mind you—the way one had come, greatly satisfied. At that time Berlin was entirely loyal and militaristic.

Despite increased tourism, despite its transformation into a street of shops and hotels, there is no denying that the Linden is beginning to languish. In earlier times the procession of promenaders was denser, more solid and uniform in its motion; now carriages and automobiles merely use the street as a convenient thoroughfare, and if something like big-city bustle surges at the corner of Friedrichstrasse, it is due solely to the efforts of the police to channel traffic. Friedrichstrasse and Leipzigerstrasse, too, are purely utilitarian entities; you associate with them only when you need to. Once the shops have closed, as can be clearly seen on Sundays, they’ve played out their main role, and except for those wanting beer or women, no casual flaneur would think to head there for relaxation and diversion.

Above all, the inhabitants of West Berlin* are absent; they no longer wend their way back to the East, and one can hardly blame them if they prefer to stroll the broad sweep of Tauentzienstrasse and its continuations rather than be jostled by people in great haste on Leipziger’s narrow sidewalks. New arrivals who have never lived in the heart of Berlin think Potsdamer Platz is the center, and in a purely geographical sense they may be right. Berlin has shifted so greatly through the exodus to the West, its original shape has become so warped, that you hardly know where to seek head and heart. We lack the inner boulevard of Paris, which imperiously directs traffic from East to West and will never cede its place. Instead we have the quadrangle of the Friedrichstadt**, which at this time lacks wide enough gates to the West. I speak of aesthetics, not practicalities. The Berlin of the 18th century enclosed itself with a wall; where this Berlin ends, we need a confident chord to be struck, a mighty prelude to the expanded dimensions of the new metropolis. But instead of a harmonious accord between old and new building concepts, we see collisions, interruptions, incompatibilities.

And the new West itself is a faceless expanse of flotsam. It may have outer boulevards—very imposing ones in fact, for all the excesses of arriviste taste—but despite greater spaciousness, despite trees, promenades, and bridle paths, they merely reproduce the Berlin prototype of the residential and commercial street; they are not rooted in an autochthonous, half-urban, half-rural way of life. Only the historic heart of old Charlottenburg has held its own, maintaining the character of a royal seat. For Berlin is urban all over, and no other metropolis has so ruthlessly gobbled up its homey heritage of town and village idylls. Apart from the few relics of the medieval burghers’ city*** and the imposing royal forum which the Hollenzollers built between the Palace and the Brandenburg Gate, one sees very little of the sort of natural, picturesque urban landscape that comes solely from the diligent, cohesive, instinctively harmonizing work of centuries. One longs today for some whimsy, some fantasy, for willful interruptions of the linear monotony; and a generation of extremely talented architects is seeking to give at least the tenements the character and individuality which the streets, in their rapid, deliberate construction, were denied.

But until this cultural ideal is realized, our chief affliction is that our streets, rather than being built in an age of primitive technology for people whose means of locomotion was their own feet, were forced from the start to serve as motor roads, as rail lines, one might say. With their linearity, their strict direction, their smooth course toward a goal, they do not slow us to an amble, but seem to invite us to accelerate our pace; and however many feet a city of millions may have, trotting every which way, the traffic’s true channel lies between the tracks. It is far more natural to ride down a Berlin street, aboveground or belowground, than to wander its banks at a placid speed.

This tempo adopted by the most industrious, intelligent capital harbors a colossal energy, but it has also impoverished the street—where we Germans, or at least North Germans, never feel quite at home in the first place. For us the street increasingly means the obligation to move, to keep walking even in the absence of a constable’s command, rather than the chance to dawdle curiously, to divert ourselves, to find free entertainment. The Romance peoples use the streets like their personal property for business and recreation. Instead of waiting for customers behind his windows, the shopkeeper opens them and thrusts his wares onto the street; and he drinks his coffee out on the sidewalk, and it does not disturb his relish to be observed by a thousand eyes. For us, private life, in its purchases and pleasures, withdraws behind a boundary of discretion and propriety; the street is respected like an onward-flowing line that must not be impeded or interrupted; we have made it less colorful, as it were, less sensual, more abstract. With us all is cleanliness, boundedness, a current between regular riverbanks, and here the marchand de vin in apron and shirtsleeves who greets his guests out on the street as though it belonged to him would arouse not just the policeman’s ire. And when, now and then, we do sit outside a café or a restaurant, we wish at least to imagine the street a garden, sheltering ourselves from the public with a flower-bedecked balustrade or a rampart of greenery.

Berlin is urban all over, swept uniformly clean, festively spick and span, more so than any city that grew slowly, that skipped not a single stage of development and still shows romantic traces of an unwashed, uncombed, unhygienic childhood. The Berliner likes to admire himself, and so far he has scrupulously noted the accolades his exemplary utilities have garnered him: sewage system, street cleaning, fire brigade, hospitals. Anyone may boast of his hard work, as Lessing*^ says. But hard work alone has never made anyone lovable. The Berliner wants to be loved now too, and would gladly trade the familiar admiration of serious folk for the affections of the international idlers’ colony that seeks, in London and especially in Paris, a climate for pleasures high and low. I find this pandering and chasing after people undignified, and anyway it leads to nothing. People aren’t quick to come to a city where everything is new—including the amusements organized just for them.

A city can increase its allure only by making no effort, by fulfilling its needs at its own inner pleasure; it must leave it up to the visitors’ taste to find this lifestyle, these manners compelling, charming, or commanding enough to conform to. We are too young yet to have fixed, time-tested habits, and we are still in the process of forming our mores. Day and night our snobs scream for culture. Well, we weren’t born yesterday either; Germany’s smallest royal seat or university is superior to Lyon or Toulouse. If these gentlemen were to express themselves more clearly, they would speak of urban culture, assigned to us as a new lesson to learn.

*In the late 19th and early 20th centuries, Berlin’s urban population shifted rapidly to the west, with the expansion of existing towns and the building of new suburbs that belonged (officially or de facto) to greater Berlin. Long before Cold War East and West Berlin, there was a sharply-felt distinction between the old eastern heart and the new western suburbs, which were associated in part with social advancement, especially for Jews. In 1920, a year after this essay first appeared, “Greater Berlin” was officially formed, increasing the area of Berlin proper from 66 km² to 883 km², while doubling the population from approximately 2 million to 4 million people.

**Developed as a suburb in the late 17th century, the Friedrichstadt district lies south of Unter den Linden, between Behrenstrasse, Potsdamer Platz, and Lindenstrasse.

***Medieval Berlin was a trading city, with the burghers, or medieval bourgeoisie, playing a leading role.

ARTHUR ELOESSER was born in 1870 to a Jewish family in Berlin. His budding career as a Germanist was cut short by his refusal to convert to Christianity. He gained renown as a feuilleton writer and theater critic, and for his monumental history of German literature (1930). After the Nazis seized power he was forced to find work at the Jewish weekly Jüdischer Rundschau, and helped initiate the Jüdischer Kulturbund, a self-help organization for Jewish artists and writers in Germany. His last major work, From the Ghetto to Europe: Judaism in 19th Century Intellectual Life appeared in 1936. He traveled to Palestine in 1934 and 1937, but chose to return to Berlin, where he died of natural causes in 1938. His wife, Margarethe, was deported in Riga in 1942 and murdered; their children survived by emigrating. In 2011, a park was dedicated to Eloesser and his wife near Charlottenburg Station in Berlin.

ISABEL FARGO COLE is a U.S.-born, Berlin-based writer and translator. Her translations include Boys and Murderers by Hermann Ungar (Twisted Spoon Press, 2006), All the Roads Are Open by Annemarie Schwarzenbach (Seagull Books, 2011), The Jew Car by Franz Fühmann (Seagull Books, 2013), and Selected Essays, by Friedrich Dürrenmatt (Seagull Books, 2013). She is the initiator and co-editor of “www.no-mans-land.org” the online magazine for new German literature in English.