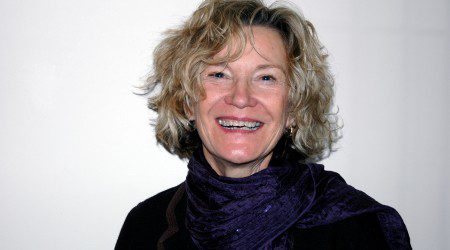 Carol Frost is one of America’s foremost practitioners of the lyric poem.

The author of numerous books of poetry, including the forthcoming Trilogy: Selected Lyrics from Tupelo Press (2014), Honeycomb: Poems (2010), The Queen’s Desertion (2006), I Will Say Beauty (2003), Love and Scorn: New and Selected Poems (2000), and the chapbook The Salt Lesson (1976), Frost has received grants from the National Endowment for the Arts and won four Pushcart Prizes. She is the Theodore Bruce and Barbara Lawrence Alfond Professor of English at Rollins College, Winter Park, Florida.

Like Elizabeth Bishop, one of her most significant influences, Frost often draws on the natural world in her poetry, which combines a high lyric voice, intense musicality, and a sharp eye for evocative details from nature that suggest a reality beyond the poem and beyond the scene observed. This is profoundly clear in “Mullet Fishing” which equates nature with power and beauty from the first lines:

Night begins to summon up its laws

and beauties nothing makes.

But I remember sun hammer,

and washed away, my dream

Here, as in much of Frost’s work, nature takes precedence, yet the voice of the poem establishes several layers of sentience, as we see the narrator-in-nature as well as the poet-as-namer of nature. Frost grants nature the supreme power of lawmaker, yet in the very act of naming so precisely the things of the world, she establishes the power of the observer and her language to capture nature’s essence.

In other poems, Frost foregrounds the sonic quality of her language in a mirroring evocation of the things of the world. The bombastic physicality of language in the poem “What the Dove Sings” evokes Gerard Manley Hopkins as much as the song of the dove, in this way again equating nature with language:

The mourning dove
wearing noon’s aureole
coos from the rhododendron,
oo-waoh, shadow o-
ver what to do. Oh.
And the sad rhetoric spreads
through suburb and wood.

And yet there is, in Frost’s poetry, a sharp sensibility that keeps even her most lyric poems from dissolving into abstraction. This is not simply a quality of language, but one of narrative direction and subject matter. Elizabeth Bishop famously let her fish go. Some of Frost’s animals are not so lucky.

Into the changes of autumn brush
the doe walked, and the hide, head, and ears
were the tinsel browns. They made her.
I could not see her. She reappeared, stuffed with apples,
and I shot her. Into the pines she ran,
and I ran after. […]
I shot her again because her lungs rattled like castanets,
then poked her with the gun barrel
because her eyes were dusty and unreal.
I opened her belly and pushed the insides
like rotted fruit into a rabbit hole,
skinned her, broke her leg joints under my knee,
took the meat, smelled the half-digested smell
that was herself. Ah, I closed her eyes.[…]

It is rare for a poem of such beauty to express such violence. It is these two extremes, beauty and violence, or love and scorn, as the title of one of her books suggests, that is the unique essence of Frost’s voice. With crystalline precision, sharp passion, and a sure-footed wherewithal of the frontier of language’s dominion over nature, Frost crafts a skilled, significant poetry of surprise and delight.