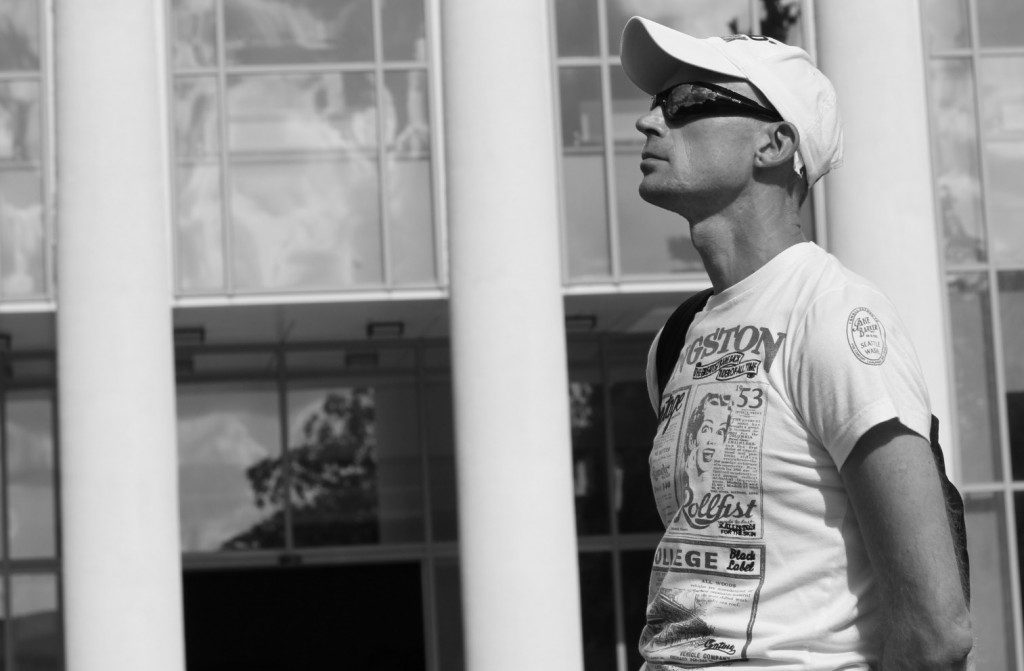 They yelled at each other for a long time, then she ran out of the room, grabbed her coat off the rack, shoved her feet hastily in her boots and rushed out the door. I went out in the hallway, put on my jacket and boots. Igor looked out from behind his door.

“Where are you going?” he asked me.

She was sitting on the little bench by the building entrance and crying. It was a sunny spring day. Clouds were forging across the sky and airplane contrails were dissolving.

Her face was red from crying, and her mascara was running down.

It was astonishing to me that she could cry like that over him, and I promised myself that girls would never cry like that over me. I moved closer, and she pressed her cheek against my chest. When she pushed me away, there was a wet spot with a black smear on my jacket.

Our family lived in a two-room apartment in a Krushchev-era housing project, and one room was just Igor’s. It wasn’t exactly his room, though — we called it “the living room,” but he slept in it and sat there most of the time. And we – myself, my dad, and my mom – slept in the second room, “the bedroom,” and that’s where my writing desk stood.

Sometimes in the evening we all watched television together in the living room, but Igor sat in there more often than not with the door bolted shut, alone or with his friends. Papa came from work late, almost always drunk, and went to bed right away. Mama first made supper in the kitchen, then she went to lie down too, only with a book. She didn’t like television.

Girls came to see Igor only during the day, when our parents weren’t there. At that point all they did was lock themselves up in his room and play music on high volume. Over the course of ninth grade, five or six girls came to see him, at different times, of course. Some of them greeted me as they passed through the bedroom on their way out – they had to pass through the bedroom to get out of his room, and that’s where I sat at my desk and did my homework.

I was in fourth grade that year, and an honor student – just like Igor was until ninth grade. In ninth he stopped studying and got straight 2’s, but at the quarter he always managed to go out with 3’s and 4’s.

The girl he “dumped” was named Natasha. That was a popular name at the time. There were Natashas in my class too – four of them, in fact.

One time she came out of the living room, went to the toilet and the bathroom, then came up to me. I was solving algebraic equations with multiple variables. It was the first time I had four variables in one problem, and because of that the equations weren’t working out.

“What are you working on?”

She started laughing. “I’m kidding. I forgot all that a long time ago.”

Igor came out of the living room. There was a lipstick smudge on his cheek. “She didn’t get it, still didn’t get it, and then she forgot it,” he said. He put his arm around Natasha’s waist and led her back into his room.

Once Igor’s friends came over – Anton and Vova. They used to be in his class, but after eighth grade they went to the trade school. Our parents weren’t home yet. Igor went in the kitchen and got some bread and jam. An hour and a half later, Vova came out of the room, went to the toilet, then called me in.

I looked in the room. On the big table, the one we brought out to the middle of the room for family gatherings, and where on a typical day Igor sat and made like he was busy, there was an empty wine bottle, and a second one with a little left in it. The window was open and Igor and Anton were smoking, doing their exhales out of it.

“You wanna get drunk?” Vova asked and poured some wine for me in somebody’s glass.

“Nobody’s messing with him.”

“Is he messing with you, kid?” Igor asked me.

“Then get away from him. You can go to your room.”

“What if he wants to sit in here? What, you own this room?” Vova said.

I sat down on the edge of the couch. The Radiotechnika radiola was playing music, something non-Russian. Vova poured the rest of the wine into the glasses – there turned out to be just a bit left — and they drank up. I was sorry Igor had interfered, and that they didn’t give me any wine. I wanted to try it.

Not long ago I saw Natasha, when I went to visit my parents. She had turned into an ageless fat lady – could have been thirty, could have been fifty — and was working as a clerk in the deli where I went for beer. Back then, fifteen years ago, she struck me as stylish and pretty.

One time Natasha came to see Igor, and they closed themselves off in the living room and latched the door. I brought a small mirror from the kitchen that my dad used for shaving in the morning and tried to aim it into the narrow crack – it was just a couple centimeters — between the door and the floor, to see what they were up to. I couldn’t make anything out.

Then an hour and a half later, when they came out of the living oom, put their coats on and went off together somewhere, I went in and began to search for clues as to what they were doing in there. I suspected they were “fucking.”

I didn’t find anything interesting, just a crumpled handkerchief under the couch smeared with something, kind of like snot, but with a different smell. I picked it up, sniffed it, then put it back under the couch.

That evening Igor came home drunk, or rather, his friends carried him home, and then he was sick for a long time.

Igor died at the end of ninth grade, in May. He was drinking wine with his friends on the bank of the river, then he went for a swim and drowned.

VLADIMIR KOZLOV was born in 1972 in Mogilev, an industrial city in what was then the Belarussian Soviet Socialist Republic. He has written more than a dozen books of fiction and nonfiction, many of which chronicle youth, punk, and street culture in the perestroika-era Soviet Union and post-Soviet Russia and Belarus. Several of his novels have been long-listed for awards such as the National Best Seller and Big Book in Russia. He was also nominated for GQ Russia’s Writer of the Year in 2011 and 2012. His most recent novel Voina (“War”) was released in Fall 2013, and he also recently wrote, directed and co-produced a feature-length independent film adaptation of his novella “Desyatka” (“10”). He is currently crowd-sourcing a documentary about the influential Siberian punk movement of the 1980’s.

ANDREA GREGOVICH is a writer and translator living in Anchorage, Alaska. Her translations have appeared in Tin House, AGNI Review, Hayden’s Ferry Review, 3:AM Magazine, Café Irreal, and several anthologies. Most recently, her translation of Vladimir Kozlov’s story “Politics” appeared in Best European Fiction 2014 from Dalkey Archive Press. She is currently seeking a publisher for her translation of Kozlov’s novel, USSR.

Fiction in Tin House
Fiction in 3:am Magazine
Interview between writer and translator in Hayden’s Ferry Review