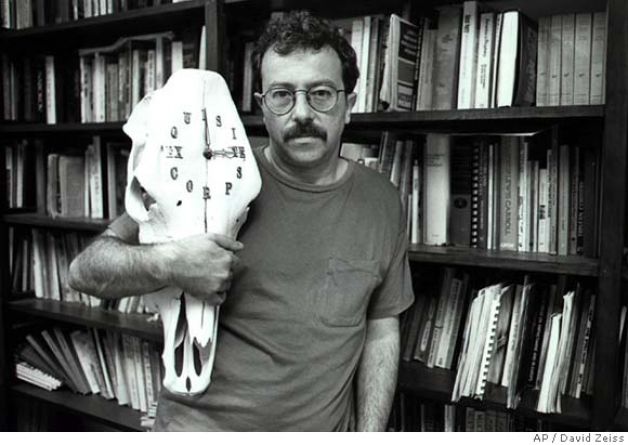 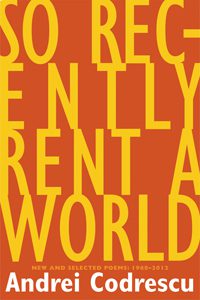 So Recently Rent a World is a book rich in poetry and history. Collecting new poems along with seven collections of poetry and nine chapbooks, it spans 1968 to 2012, more than four decades in the writing life of Andrei Codrescu, one of the most public and opinionated poets to emerge from the 1960s New York poetry scene.

Born in Romania in 1946, Codrescu emigrated to the US in 1966 and became an active presence in the second-generation New York School, among poets including Ted Berrigan and Anne Waldman, as well as the burgeoning scene surrounding the Poetry Project at St. Mark’s. Since then, Codrescu has published a book nearly every year, held successful academic positions, founded the journal Exquisite Corpse, and hosted a popular show on NPR. His has been an eventful public life.

This selection of poems is ingeniously organized. Beginning with Codrescu’s most recent poems, it continues in chronological order of publication. Short introductions by Codrescu put each of his books in the personal, political and social context of the time in which they were published. Because Codrescu has always been a publicly minded poet, reading his collections in order allows one to trace American history from the tumultuous 1960s, through the heady 1970s and ’80s, the economic boom of the 1990s, and the economic, humanitarian and political disasters of the early 21st century. It is rare that a poet offers such a transparent reading of his times, and this has been one of the keys of Codrescu’s voice from the beginning, even when writing in personae.

Codrescu’s most recent poems are deeply concerned for our technocratic society and how the intersection of technology and humanity is often a head-on collision. These are utterly contemporary poems, with references to the things of our world: Facebook, Twitter, iPhones, and LinkedIn. While at times the language is flat to the point of slackness, the immediate connection between poem and life is usually enough to charge each line with interest. These lines come from “5.14.2012 facebook redux.”

in the U.S. where everybody is on facebook
pretending to be just hanging out
discussing the quirks of their dogs
their tastes in music and what they want in a mate
facebook is just pixel puff off a virtual dog
its data bots eat your brain and make you buy stuff
and if you make a move that looks vaguely human facebook arrests you
and connects you to twitter linkedIn and other social groups
where communication will rehabilitate you

One clear shift in style is that Codrescu’s early poetry is mostly first-person, where in his most recent poems he has taken a more public, general form of address. Although several early collections feature personae, these are not the stylistically distinct voices we find in Fernando Pessoa. Rather, they are extensions of Codrescu’s language and imagination.

From his earliest work, Codrescu has been deeply opinionated, and the passion of his ideas has provided the thrust of his poems. This isn’t protest poetry, but rather the reaction of the insightful intellectual to a world gone awry. In his prose introductions to his books, Codrescu makes the connection between poetry and life blatant. Introducing his collection Jealous Witness, published in 2008, he writes: “And then it came: 9/11, perpetual war, the militarization of space, the quasi-military state of the New World Order, the destruction of New Orleans by Hurricane Katrina, and the collapse of the world’s financial system. …The beginnings of centuries, thinking only of the last two, were not auspicious. The beginning of ours, a millennial century no less, was even more devastating.”

Not for Codrescu the liberating power of the imagination. His language is colloquial and his subject is real life. While he often employs surrealist images, it is more often the charged tumble of his line breaks that provides the forward momentum of the poem, hustling it toward a conclusion that throws us back to the beginning. Witness “did something miss new orleans?”:

what do you call this this catastrophe sonnet
used to be called n’awrleans now it’s simply
the greatest engineering disaster in u.s. history
[…]
before that it was just the greatest swamp a drunk
frenchman ever dedicated to his sun king
so let’s rebuild this with new urban principles
that bow to history without throwing up

This final line is perhaps indicative of Codrescu’s poetics: Knowledgeable of literary and social history, his work bows to them without giving up its originality, its personality. Aware of his role as a poet in the flux of the world around him, Codrescu makes his poetry a measured rant against all that is and should not be. So Recently Rent a World shows this opinionated poet in all his energy, cutting ennui and focused outrage.