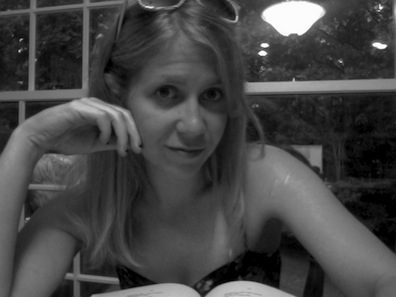 POEM AFTER H.D. AND EIDOLON

“did they re-touch her arms, her shoulders? did anyone touch her
ever?”—
H.D.


How did she hold a nectarine? Who stood, kissing her belly
like the ship’s bow? what did she see in silk stockings,
in the breasted light of the grey pier-glass?
Were her eyes screened and away? Was her dress
blue-dashed and signal-heavy? did her hard, oaken scars
show through? Did she at all find me here, painted
with the telephone of her? Was she more afraid of fog
or a field, living room or bank? How did she move
through this caroled multiverse? Had she seen
a glacier, filled with rivets and the bodies of mermaids?
What glowing berries did she hold in her lap,
waiting for the snow to start? Was she always told
when to be full, when to not be? Did she want
to write the fecundity of mother termites
when she wanted to write eating disorder? Was she glad
to have me in her future? Did she hear the daughter
upstairs watching National Velvet? How often did she speak
of willing bodies to be good? Did she alone have
a throbbing lightness, a courage in defining some
quick green beginning? How, then, did she recover
the hyacinth body, my body, like her body?

When it’s time to find a new element

When it’s time for you to go

Keep your arms crossed in front of you

Wear your rings about you

In this our next foggy release

A push through the heliopause

It is so typical to be empty

So chemically bombed and seared

So dismantled by history

My white web grows out

Would that I could

That we closed the reactors

Would that we become

A blanket of cement in the forest

That we hide there with the nettles

And watch the Eagle land again and again

And are friends for the smallest time

That I read you sonderkommando facts

Your hair twisted into fire

I have asked all the right questions

But all I want to do is say science

And wait for a response

It is better to see

The silhouette of the surprise

GALE MARIE THOMPSON is the author of Soldier On (Tupelo Press 2014), and the chapbooks Expeditions to the Polar Seas (Sixth Finch Books) and If You’re a Bear, I’m a Bear (H_NGM_N). Her work appears or is forthcoming in the Colorado Review, The Volta (They Will Sew the Blue Sail), Columbia Poetry Review, Better, Denver Quarterly, Volt, Guernica, and others. She is the founding editor of Jellyfish Magazine and lives, writes, and teaches in Athens, GA.