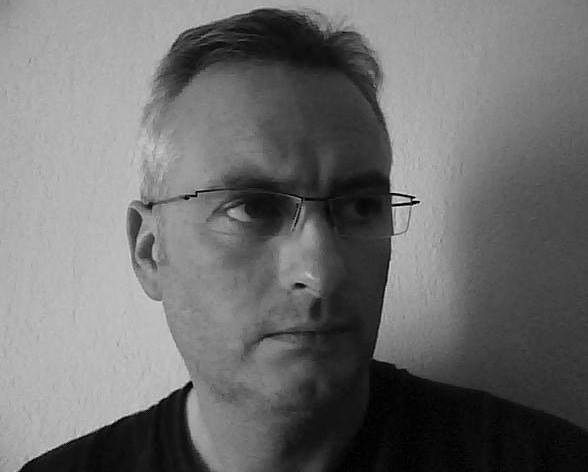 She gave me money, just like every Friday. She did it without a word, as if it was – what do you call it – a transaction, as if she was buying something. It had nothing to do with pity, or love. She wanted me out of the house so her friends could come round, eyeliner this time, they were bringing samples. Eleftheria was in a buying mood. She called Fridays ‘Ladies’ Night’, arranged over the internet, the kids had already been packed off to their granny’s. I said nothing. Things had been tight since I got laid off. Two weeks notice, no compensation. And now that my stamps had run out there was no dole. We were living off the pension her father got. I couldn’t complain about her spending money on makeup, not when she’d just subbed me.

The streetlights outside the flat were still broken. In the shadows, I passed an old man tapping his walking stick against the kerb. The cafeneio wasn’t far. It was time to start avoiding it. I was in serious debt to the guvnor for drinks poured previously. Nobody likes a bum, and that was what I was turning into, the man who drinks himself into a stupor in the knowledge that he can’t pay. The money Eleftheria gave me was never enough to get drunk on, it was barely enough for tobacco and papers, just a couple of euros left over. I could have gone in and paid off part of the tab, but that wasn’t going to happen. I decided to go somewhere else, maybe meet up with some of the old crowd, have a laugh. It was a while since I’d seen anyone.

I skirted the square, keeping my head down. It was the middle of winter, you could lose yourself in the dark streets, a feeling I liked. Then the sudden aroma of heating oil, I breathed in deep. A Mercedes and a Porsche were parked behind the gates of a new apartment block. Lucky for some. It would have been wise to keep the money in my pocket, we had a shelf full of bills that were long overdue, but I needed a drink. The shop I was going to was all the way across the other side of town, it couldn’t have been further away from the flat. Maybe that was the attraction, although I was beginning to feel tired from the walk. No energy. No energy for anything, never mind sex. The last time was a disaster. Months ago. Both the spirit and the flesh were weak. Eleftheria told me not to worry and left it at that, but I could tell she was fuming. I knew her so well. She was a woman who liked it. She needed it, she said. We had stopped doing things together. It wasn’t just the sex. Even going out for a coffee was history.

Despite the cold, I was sweating when I got there. A card game was in progress up the back. The players turned to look when I walked in. Someone muttered something. It sounded like ‘performance’, but I let it go and sat down next to Big Kostas. It wasn’t him who made the remark, it was his brother-in-law, Bruno, the male model, all brushed hair and lightning teeth. I didn’t know the other two. Kostas skidded the cards across the baize. He tipped the wink to the waiter and a bottle of beer – a small one, I noticed – and a glass were placed at my elbow. The game continued. Biriba. It was a matter of time before someone started shouting, that was half the fun, especially if you were just watching. Heated team disputes were what made it worthwhile.

The hand soon finished. Bruno looked at his friends then turned to me with that perfect grin all over his mouth. ‘Funny seeing you in here,’ he said. ‘And a Friday at that.’

Kostas was dealing the cards. ‘Shut it,’ he said.

His friends laughed. Fair enough, Bruno, you’re an arsehole, best of luck. I should have left, but I couldn’t move, not when there was beer sitting, especially when it was being paid for by someone else. It’s easy to be smart when there’s money in your pocket, and there was plenty in Bruno’s, the International Chancer. I looked round the shop. The only other customer was seated at the table near the window. I did a double take. It was that American guy, the writer, tap tap tapping on his wee computer. He was quite famous in the town, there had been an article about him in the local rag, he’d won an award. I couldn’t see what he was writing. I wouldn’t have understood, anyway, I only did English for a couple of years at school, and I didn’t pay much attention. The kids, right enough, if I’d helped them with their homework I might have learned something, but that was Eleftheria’s department. In English, her name is ‘Freedom’, that was as much as I knew. She did an exam. It was really expensive, but she passed. She was thinking about applying for a teaching job as soon as things picked up.

‘There’s nothing like solidarity between the working men,’ I said.

Bruno threw his cards down. ‘You’re a fucking comedian,’ he said.

‘Fuck off,’ he said. He leaned his forearms on the table. They made heavy depressions in the baize. ‘In a word, ‘paint’.’

‘That had nothing to do with me,’ I said. I drank more beer. ‘I hope it was nice colours.’

‘I hope it was nice colours!’ laughed one of his mates. ‘You’re right, he is a comedian.’

‘Was that the storeroom thing when you got the verbal warning?’ said his other pal. ‘That was out of order.’

‘What goes around comes around,’ said Bruno. He slapped his hands together. ‘Oi! Bring another beer for Tommy!’

Kostas looked up from his cards. ‘You’re a cunt,’ he said.

‘I’ll admit that,’ said Bruno. ‘But I don’t like being called a thief. Heh, Tommy, by the way, how’s Eleftheria? Still looking good?’

‘Right, that’s enough,’ said Kostas. He turned to me. ‘Tommy, don’t take this the wrong way, mate, but I think you should leave.’

His friends found this hilarious.

‘I think it’s you that’s the comedian,’ I said.

‘Better a comedian than the butt of the joke,’ he said. ‘Come on, Kostas, shuffle. That last hand doesn’t count. I got distracted.’

Kostas was still looking at me. He shook his head slowly as he picked up the cards. ‘For Christ’s sake, Tommy,’ he said. ‘Go home.’

‘What, am I spoiling your night out?’ I said.

The other three were smiling.

‘It’s good to have a night out,’ said Bruno. ‘Is that what you’re doing, Tommy, having a night out?’

‘That’s good,’ he said. ‘That’s what we’re all doing, eh, lads, having a night out away from the missus?’

‘Too right,’ said one of his friends. I seemed to remember him from somewhere, a work’s dance or something. His name might have been Socrates. A driver. Beware of the big white van. ‘Gets helluva boring in the house,’ he said. ‘The walls start closing in on you.’

I lost track of the time. They’d started plying me with ouzo between hands. Kostas didn’t look too happy, even though he and his brother-in-law were winning most of them.

‘Fuck that,’ said the man who might have been Socrates. ‘I think there’s secret sign language going on here.’

‘Good point,’ said his partner. ‘The laws of probability…’

‘Experience,’ said Bruno. ‘Telepathy. The result of our deep-rooted love for each other.’

‘It’s me doing all the work,’ said Kostas. ‘And it’s a good job I’m on your side.’ He pushed his bulk away from the table and went up to the toilet.

I ordered another beer.

‘What the fuck are you talking about?’ I said. My lips were numb. It was the ouzo. A chair scraped. The American was gathering his papers and pencils. He unplugged the computer from the wall. It seemed like he was taking a liberty, but maybe he was paying for the privilege of using the shop’s electricity, who was I to know? I watched him wind the cable round his elbow, like a musician at the end of a gig. That took me back. Staying till the ends of gigs, watching the musicians pack up, back when we were young and the future didn’t matter.

Heavy footsteps coming down the stairs. Kostas stood right in front of me and started gibbering about football, did I see the game during the week, that offside decision in the second half of the cup tie…

Bruno and his friends were looking somewhere else.

A woman was at the window. She had a phone pressed up against the glass. I could just make out the screen, blue and white with little red dots. She was smiling, beautiful, in the way only a stranger can be beautiful, with eyes like Cleopatra. I was filled with this…I wanted to call out to her, to call her name. How had she found me here?

The American joined her outside. Her hand grazed the side of his face then was lost in the hair at the back of his neck. She pulled him towards her. They kissed long and deep, the way lovers do. I could almost hear them.

ANDREW MCCALLUM CRAWFORD grew up in Grangemouth, Scotland. His work has appeared in many literary journals, including Interlitq, Gutter and Spilling Ink Review. His first novel, Drive!, was published in 2010. A collection of short fiction, The Next Stop Is Croy and other stories, was released in 2011. Another collection, A Man’s Hands, was published in 2012. He lives in Greece.