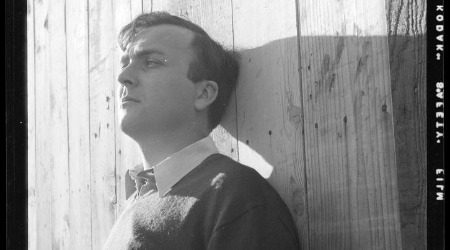 One of the key representatives of the avant garde American poetry that emerged after World War II, Duncan was said to have “the finest ear this side of Dante,” according to Lawrence Ferlinghetti. A poet and public intellectual who was raised by a Theosophist family to believe that he had lived in Atlantis in a previous life and was destined to be a poet, Duncan was largely self-taught, and had a voracious interest in everything from high literature to fairy tales, Renaissance art to collage, music to religion, and physics to philosophy. All of these wide interests are on display here. Perhaps more importantly, Duncan loved to talk. His propensity for what he called his “talking jags” has been documented most recently by Lisa Jarnot’s excellent biography The Ambassador from Venus.

Readers looking for a first-hand impression of what it would have been like to talk — or, rather, listen — to Duncan will find no better source than this well-edited, finely presented volume of interviews. (This short YouTube clip doesn’t do him justice). Duncan doesn’t speak in phrases or even sentences. Instead, whole paragraphs seem to emerge fully formed from his mind, often sprawling over pages, making connections between the most unlikely sources. It is fascinating to watch such a mind at work.

I’ve got a theoretical proposition. It comes out of Schoenberg’s observation about harmony. Rime, or meter, which is the same word in English, is simply a sense of measure being present. And while measure may be like a ruler—twelve marks, and all of them equal — a measure actually means you’re feeling something did happen before or did not happen before. Any sense of resemblance or any sense of disresemblance indicates the presence of rime. It was taken before, of course, to mean that you have moon, June. “Okay, I heard that sound before, so a measure is going on.” But actually in many of those poems where you’d only hear the moon, June, there was no measure anyplace else.

In these interviews, as in his poems, Duncan was never afraid to make theoretical propositions, and to follow them to completion. Whether he is bringing Schoenberg’s 12-tone system into a discussion of rhyme and meter, or using principles of Renaissance art to describe poetic craft, Duncan doesn’t so much use metaphors as point to the common fabric of all artistic endeavors. In this way he was a Romantic, insisting on the primacy of the imagination to shape not only our view of the world, but the very world itself.

But this collection isn’t all theoretical. In the later interviews especially, having achieved the status of elder statesman, Duncan pulls no punches when discussing what he saw as the paucity of quality in American poetry after World War II. It’s refreshing to read this revisionist history from someone who was there during the creation of so many of what are now considered the Ur-texts of the New American Poetry: Duncan’s The Opening of the Field and Charles Olson’s The Maximus Poems for example. These books challenged the popular ideas of what an American poem could and should be:

Duncan is similarly pugilistic when discussing Language poetry, which was the last significant development in American poetry he witnessed before his death in 1988. While a number of the poets of the movement — which was largely based in Duncan’s San Francisco — looked to Duncan for inspiration, he was somewhat cagey about the worth of the writing they had produced:

What does it take to be a poet in America? For Duncan, the act of writing verse was equal parts craft and spiritual calling. The ethereality of his poetic intellect was balanced by a commitment to social issues, as evidenced by his ground-breaking essay “The Homosexual in Society” (1944), and the war poems in his collection Bending the Bow (1968). His poetry is lithe and dense at once, and his erudition, along with his fondness for allusion, render his writing difficult, often to the point of being off-putting. This collection of interviews therefore plays the vital role of companion volume to a body of work that is in the process of being recognized as one of the most profound in post-war American poetry.