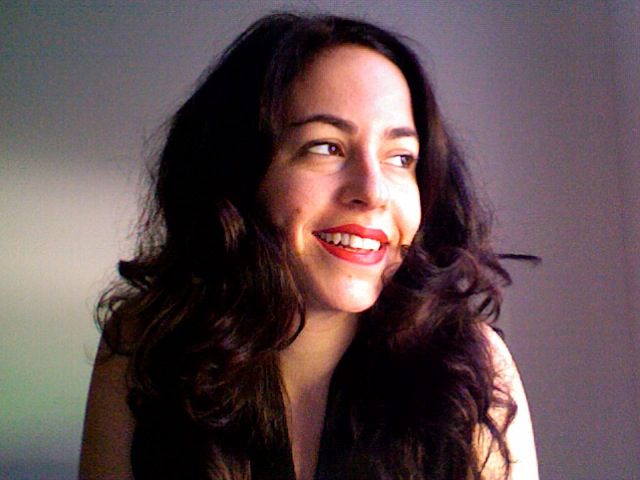 EVERYTHING WAS BEAUTIFUL AND NOTHING HURT

“If you love Poems so much,” says the bully, “why don’t you marry Poems?” I have wandered onto a playground, accidentally. I am a sixty-seven year old woman standing on the 3 of a hopscotch game blurred by last night’s rain. It is September. The swings smile their black rubberish smiles. I smile back, politely. “What’s your name, Bully?” Bully puffs his chest out. “Beadlebaum,” he says. “Listen, Beadlebaum, I did marry Poems. We’ve been married for years.”

There is a space between Beadlebaum’s front teeth that reminds me of Poems.

My cell rings. It’s Ma. I tell her about the bully. I tell her his name is Beadlebaum and that the space between his front teeth reminds me of Poems. “Describe,” says Ma. “Like wild shade,” I say. “More,” says Ma. “Like an empty bible,” I say. “How’s that?” asks Ma. “Like if the bible was a room you could walk inside and there was nothing. No genesis, no exodus, no numbers, no god. No light, no darkness.” Ma is silent. Beadlebaum coughs. “I don’t really know,” I say. “Stick with the shade,” says Ma.

Beadlebaum’s fists are clenched. He jumps and sways around me. He is shouting. “If you love Poems so much, why don’t you marry Poems?” Beadlebaum is a bad listener. I crouch down and look Beadlebaum straight in the eye. I do not like repeating myself, but this time I do. I must. “I did marry Poems.” For proof, I flash my band. Beadlebaum squints. “And not only did I marry Poems, but at the time we married it was only legal to do so in six states. We married in Iowa, Beadlebaum. Iowa. Have you ever believed, Beadlebaum, in something much, much bigger than you?” Beadlebaum is sweating. “Liar!” shouts Beadlebaum.

“Listen, Beadlebaum. It’s a bad economy. You are trying to spend me when I’ve already been spent.” I sit him on a bench and tie his shoelaces. “Some would say we’re in a depression, Beadlebaum. Over the years I applied for dozens and dozens of jobs. I killed many interviews. Slaughtered them, in fact. I held those who may be concerned to my bosom and answered their questions so expertly I left them weeping. Weeping into my skin, Beadlebaum. Was I sloppy at times? Perhaps. Was my perfume magnificent? It was. Was I overly prepared? Never. Did they call me back, Beadlebaum? No they did not. No one was really hiring. And if they were hiring they weren’t paying. And if they were paying they were only paying Donald. Do you know Donald, Beadlebaum?” Beadlebaum shakes his head no. “Do you know why you don’t know Donald? You don’t know Donald because nobody knows Donald. Donald doesn’t exist. Donald is the man none of us will ever be.”

I peel Beadlebaum a hard-boiled egg and offer it to him. He turns his face away.

Ma calls. “Do you need milk?” She is shouting. She thinks I am always in the need of milk. “Not now, Ma,” I say. “I am getting somewhere.”

Up and down the seesaw we go.

Poems is looking for me. Sometimes I get lost, like today.

Ma calls. She tells me she is reading Slaughterhouse Five. “It says here,” says Ma, “Everything Was Beautiful And Nothing Hurt.” She says this to reassure me. As if she’s reading the newspaper, and not a drawing in a book of a gravestone. Ma’s sharp, but lousy with fiction. Beadlebaum holds my hand. We watch the toads hop across the damp ground. “They know something we don’t know,” says Beadlebaum. And they do. The toads do.

Just when I begin to wonder if Beadlebaum is a real child, Poems shows up. Beautiful Poems, the color of upturned soil.

Poems cries so hard a cloud bursts, and children spill out. They fall through the air. Their legs and arms go in every direction like sunshine. They land softly. They flood the playground in brightly colored pajamas.

They are carrying books, keys, bones, the bareness of my being. Some are carrying each other. They march up to Beadlebaum and surround him. Of all the children, Beadlebaum seems the most elderly. Pale Beadlebaum. In his fake corduroy shorts.

Ma calls. “There is no such thing as fake corduroy, says Ma. Only corduroy, regular. It’s like skin,” says Ma. “It’s either skin or if it’s fake it’s something else.”

Now Beadlebaum is in the middle of a thick circle of children who have fallen from the clouds. They do not taunt him or throw at him bones. They just stare and hum and ask Beadlebaum who he loves. “Who do you love, Beadlebaum?” the children call out.

Ma calls. “It’s impolite to love no one,” she says. And Ma would know. I tell Ma my head is bleeding. “Of course it is,” says Ma.

What the meaning of sister is I am unable to say.

She and mother rush past me on Broadway. In their furred hoods they are part of the same outfit. One sixty-three the other twenty-four, they are having some kind of thin, dry happiness with each other. “Hi, sister!” I call out. “Hi, mom!” I am buying fruit. Mostly apples, occasionally a pear. “Who cares,” snorts sister. She is mother’s later, better daughter. They are already blocks away.

What is wrong with sister is that frost gathers around her mouth even in summer.

Sister and mother invite me out to dinner. When I arrive at the restaurant they are already bent over their menus. Also, they are singing. “Tinker, Tailor, Soldier, Sailor, Rich Man, Poor Man, Beggar Man, Thief.” At “thief” they look up fast and point at me. They have clearly practiced this because it’s perfectly performed. “No offense,” snarls sister. “None taken,” I swallow. But I have taken offense. I have taken so much offense I can barely breathe. I can’t imagine what I’ve stolen.

At the hospital, sister and I wait for mother’s results. It appears mother’s body is out of water. The doctors slosh in and out of her room with jugs, pails, drums, buckets, et cetera. “She will be fixed by Friday,” they promise. “Easy peasy.” Sister is assured. She knows these doctors, personally. “The difference between me and you, Mumford, is that I have clout whereas you have no clout.” At first I think sister is saying clouds. That I have no clouds. “Where would mother be without my clouds?” yawns sister. She blows kisses to the doctors. They giggle and swoon. Outside, the city is bursting with freedom.

When I finally show this sister to our father he is genuinely surprised. Sister brushes crumbs off her designer sweater and nods hello. “Hello,” says dad. “Beautiful day.” Sister looks at her watch. She squints up at our father as if he were a greyhound bus in a sunlit parking lot. “No seats,” she says. “Mumford,” she says, “I am catastrophically bored. Get me out of here, Mum. Pick me up and carry me. I am too thick with ennui to walk.” I pick sister up. Her expensive legs dangle everywhere. Sister has never before allowed me to touch her. I feel like a hero. When I return sister to mother, mother punches me in the face. And then sister punches me in the face. And then mother. And then sister. And then mother. And then sister. In the distance, I can hear dad whistling. He is so hopeful and free.

At the health club, sister and mother are on the elliptical. Their bodies swoosh. I stare up at their fitness. Today I am not even trying. I munch on snacks in a pleated skirt. “Haven’t I grown,” asks sister, “so much as a person?” I nod. Mother beams. “As a person, Mumford, I have grown so much. As a person, have you? No, Mum, as a person you have not grown so much. In fact, you have grown not at all. Mumford, Mummelah, mother got off so cheap with you, didn’t you mother? Didn’t you say so?” Mother nods. “You know why, Mums?” I shake my head no because I don’t know why. “I will tell you why, Mumster. Mother got off so cheap because you loathe to ask for what you will never ever ever ever ever ever deserve. Furthermore, you lack imperturbability. You are overly perturbed. Come here, Mumford. Set your snacks down. Listen to me, Mumford. You are chubby and your boyfriend is missing forever. You are, and here I am only quoting mother, a misery on earth. Also, Mums, it is impossible to tell if you really love a mouse or if you only love the word ‘mouse’ for some exhausting reason. This makes you untrustworthy, Mumford. Which is it, Mumford? Mouse or ‘mouse?’ You are such a meanie, Mumford. I know you keep a mouse when all you really wish to keep is what it’s called. Step aside, Mumford, your largeness is in all the trainers’ way. Your long glances are too long. Your terribly written fables are filled with inoperative motifs. Everything you do, Mum, is so unrealistic. Let me tell you something, Mumford. Let me shed some light on why you are soused in a sadness that could’ve so easily been vanished had mother doted on you for one second. It is because on you, and I hope I get this right, because on you she cannot dote. Isn’t that right mother?” Mother nods. “About you she is lukewarm.” Mother nods more. “Doting on you is impossible, Mumford. You are ugly, Mum. Even if I had 1000 sons none of them would ever be your nephew. Are you listening, Mumford? None of them would ever call you aunt or auntie or aunt Mumford. Not even the worst of them. Are you listening, Mumford? Are you getting this? Or have you drifted off as to sleep as you so often do? Try to get the gist of a barbell, Mumford. Maybe that will help, at the very least, your figure.”

On the battlefield, mother and sister sneak out of view. I pick up sister’s gun. Hilarity does not ensue. Nothing, in fact, ensues. Aside from a sycamore, I stand alone. My scalp itches. Where is my insurgency? I look around. My insurgency is late. I long for swag, but I know no swag will come. I long for loot, but the loot is long gone. If I were sister, I wonder, would I relish this time alone? If I were sister, standing here, holding sister’s gun, would I be seized with a great feeling of greatness? If my skin, like the sycamore, flaked off in large patches could there ever be a sister underneath? Maybe not a whole, perfect sister, but a little piece of sister? Just a small, terrified piece of sister bursting out of me? I hold sister’s gun up to my nose and slowly breathe in. It smells like nothing. I look around the empty battlefield. If only sister and mother had stayed. I really think they could’ve loved it here.

SABRINA ORAH MARK is the author of the poetry collections The Babies and Tsim Tsum. Her poems and stories have recently appeared or are forthcoming in American Short Fiction, The Believer, The Harvard Review, and in the anthology My Mother She Killed Me, My Father He Ate Me: Forty New Fairy Tales.