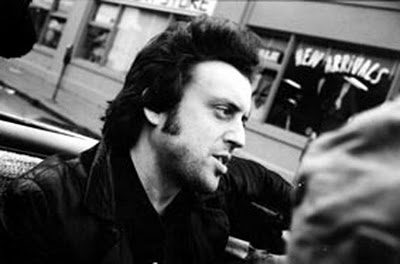 A POEM FOR RACONTEURS

In the blue-aired seaman’s mission
the TV is hotwired and pulsing.
In the blaze of the marquee outside
her fist opens slowly
like a fleshy pink flower
as though to separate
the men from the women.
On the downtrodden sidewalk
in front of the Star Hotel
the animal logic kicks in.

Like the tricks of the light
in a forest that’s not primeval
or in an alley that smells like piss
where the dead and the undead
are vying for a conjured moment
of pure unadulterated visibility
in the contingency afforded by
the magnanimity of negative space
he’s making up his sea stories
and she’s making up believing them.

A POEM FOR ANTEDILUVIANS

The end of the record
the needle
scratching in the groove
the silence becoming louder—
who can remember that?

The years plus the years
inflected with their own passing;
the heart owns nothing,
but maybe stakes
a claim or two.

With an eye to the weather
both external and internal
forsaking attitudes
for directions not taken—
swimming in a dewdrop of sin.

The currency of memory
counted out in dreams
which bounce back the light
once mirrored in
the charity of experience.

NEITHER WAR NOR PEACE

You speak in proverbs but the lay of the land
has an idiom all its own.
You remember the snow and you remember the heat
and you searched for systems and you found them.
Things that happened “back then”
have a place of their own as well;
an old Strauss waltz on the radio in the kitchen—
sparrows cavorting in a hedgerow
in slanting winter sunlight—
the decadent elegance of candles burning
while the sun’s still up.
Neither war nor peace nor flowering evil.
But a system nonetheless.

MARK TERRILL shipped out of San Francisco as a merchant seaman to the Far East and beyond, studied and spent time with Paul Bowles in Tangier, Morocco, and has lived in Germany since 1984, where he’s worked as a shipyard welder, road manager for rock bands, cook and postal worker. He is the author of Bread & Fish (The Figures, 2002), The United Colors of Death (Pathwise Press, 2003), The Salvador-Dalai-Lama Express, (Main Street Rag, 2009), Laughing Butcher Berlin Blues (Poetry Salzburg, 2010) and 21 other collections of poetry, prose, memoir and translations. Other writings and translations have appeared in over 600 literary journals and anthologies worldwide, including City Lights Review, Bombay Gin, Denver Quarterly, Skanky Possum, Gargoyle, Rattle, Zen Monster, Talisman, Partisan Review, Jacket, etc.

Read more by Mark Terrill in B O D Y: