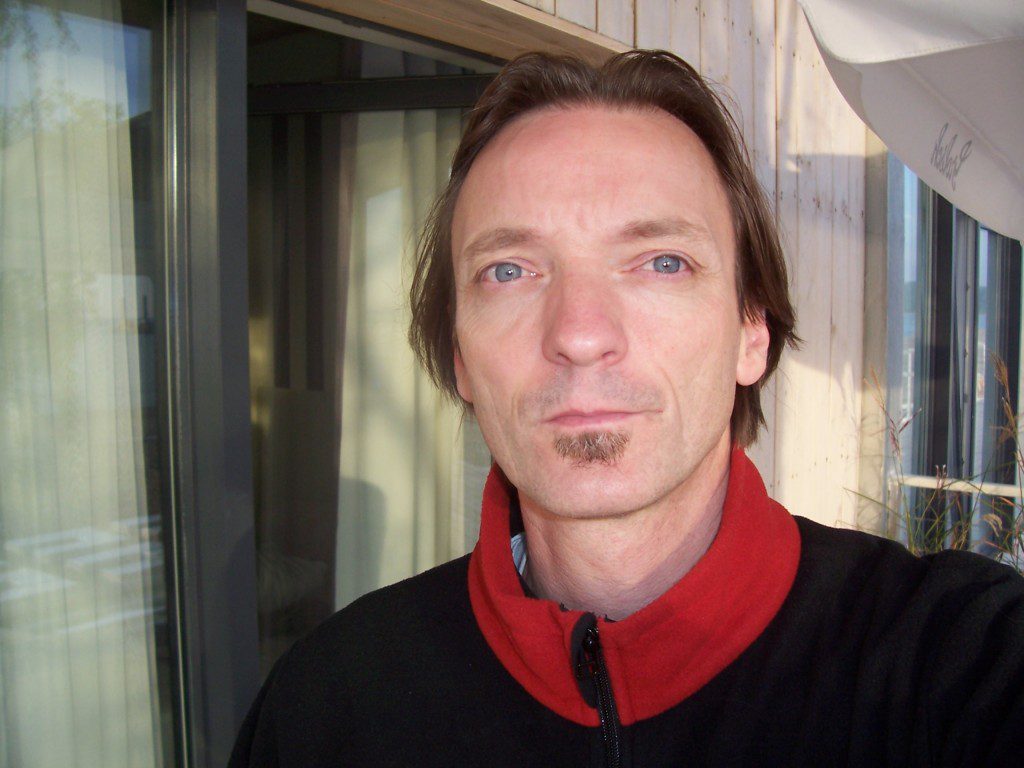 On a hot day
in the bakery (Reitbahn-
straße) I sit
and drink coffee.

goes to the flowers
stands
bent over the little pots
of greenery.

I hold my breath.
Only for a second now
I’d like
to believe in a miracle,

the way she stands there
and submerges each and
every pot in cool,
glass-clear water.

Around his white head I saw
cherry blossoms tumbling, Japanese
with opened umbrellas, flipped out
like Sheri Martinelli, one of his last
muses. The ocean, which blows through
all his lines, was rough to him, it rolled
untiringly against fissured cliffs, it bit
into him, craved, roared, barely a
footpath through this foreseeable
wasteland. But he always went his way,
Usura the slut in tow, they
cursed each other, the whitebeard
and the insatiable one. One would have
to invent his hand, which writes the
scratchy writing on a notepad, invent
the lizard under the prison camp fence,
its slithering body and the way it gallantly
erases the light of the watchtower. The
prisoner lies on the ground, stretches,
stretches all the writing fingers, returns
the glance of the lizard. Language
is not only made of words, it requires
further presence or one of a white-
blooming winter-head of snow.

VOLKER SIELAFF was born in Sachsen, Germany, in 1966 and lives in Dresden, where he works as a poet and prose author. His poems, essays and criticism have appeared widely in various publications, and his poems have been translated into ten different languages, including English, French, Italian and Czech. His work was included in the anthology, Twentieth Century German Poetry, published by Farrar, Straus and Giroux (New York, 2005) and by Faber and Faber (London, 2005), and his collection of poetry, Postkarte für Nofretete, was awarded with the Lessing Prize in 2005. His most recent collection is Selbstporträt mit Zwerg, (Luxbooks, 2011), from which “After William C. Williams” and “Photograph of Ezra Pound” are taken.

MARK TERRILL shipped out of San Francisco as a merchant seaman to the Far East and beyond, studied and spent time with Paul Bowles in Tangier, Morocco, and has lived in Germany since 1984, where he’s worked as a shipyard welder, road manager for rock bands, cook and postal worker. He is the author of Bread & Fish (The Figures, 2002), The United Colors of Death (Pathwise Press, 2003), Superabundance (Longhouse, 2008), The Salvador-Dalai-Lama Express, (Main Street Rag, 2009), Laughing Butcher Berlin Blues (Poetry Salzburg, 2010) and several other collections of poetry, prose, memoir and translations.