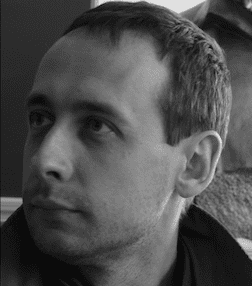 Translated from Polish by Scotia Gilroy

there was a disabled girl at our school

i fought for my father’s love

dad had a black belt in putting people down
he told me repeatedly
that according to what he knew from grandpa
Auschwitz would’ve been an ideal place
for my further education
finally i’d learn to be punctual resourceful tidy
when i returned home late
he transformed into Pontius Pilate
one time when we were taking the bus together
he read the regulations
using public transport with repulsive things is prohibited
he said
look, there’s something about you here
we became bound by a thread of mistrust
whenever we talked i always felt as if i were a tiny worm
which had crawled into a pickle jar
and father twisted the lid shut
and shouted you loser
once he told me that i’m not even worth spitting at
actually i was happy about that
at christmas i complained to my mother
that there was no affection in our house
she responded what do you mean
you’ve never been beaten
i often dream of a dog tied to a tree
with five shots five złoty written above it
and father collecting the money

i imagine how wonderful it would be
if my father died

SCOTIA GILROY is a literary translator, writer, cultural journalist and musician from Vancouver, Canada, currently living in Krakow, Poland. She holds a degree in literature from Simon Fraser University (Canada). She has taught English at the Jagiellonian University (Krakow), and currently works as a book editor for the university’s academic press. She also works as a Polish-English translator for numerous cultural institutions and literary publishers in Poland, and edits Ad Americam, the Jagiellonian University’s annual journal of American studies. Her fiction has appeared in the anthology Warsaw Tales, the Berlin-based journal Bordercrossing Berlin and the Krakow Post.

PrevPreviousTHE POEM: Diana Khoi Nguyen on Mark Levine’s “Then for the Seventh Night”
NextFriday Pick: Einstein On The BeachNext