THE POEM: Diana Khoi Nguyen on Mark Levine’s “Then for the Seventh Night” 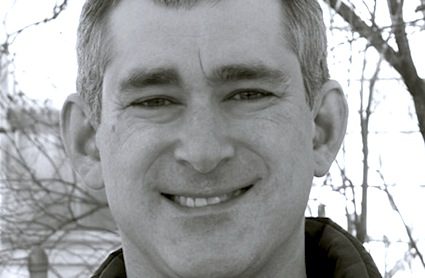 At some point during the last couple of years, I noticed I had the tendency to reject without a thought whatever my partner recommended to me (he noticed this as well), whether it be a restaurant, movie, or poem, etc. I know, I sound, and likely am, an awful person. My disregard wasn’t really a rejection of my partner or of the things he recommended; I felt that our lives were so closely aligned (we’re both poets who met at Columbia during our MFAs)–and as an aspiring writer, I wanted to isolate myself as much as possible from his preferences, his style, his influence (the beauty of his thinking and curation is overwhelmingly contagious). I wanted to arrive at new restaurants, movies, and poems on my own. Aren’t we all somewhat susceptible to the preferences of those near us?

So it happened that my first contact with the work of Mark Levine came with my first AWP conference. It was the first poem of Levine’s second book (Enola Gay), and I didn’t even read it. It was read to me. In a D.C. hotel room.

“Can I read you a poem,” he asked. This was how it always began. I remember thinking the poem seemed plain, a little boring, and I was especially turned off by the church setting. I thought then that I wasn’t religious, that I didn’t care about religious experiences. I said as much to my partner, who knew me well (he still does). He laughed chidingly.

“But Diana,” he said, “what if you thought of the poem as being not about a church or ‘religion’ but about writing poems?” I think I rolled my eyes–it seemed that everything those days was just like the act of writing poems. I didn’t like that schema, so I shrugged the poem off.

I cringe now, with shame, at my ignorance, arrogance, and refusal to fully consider the poem. About a year after that conference, I came across a copy of Mark Levine’s Enola Gay, right when I was preparing to teach an undergraduate poetry work for the first time. I read it on the subway. I read it in bed. I read it numerous times. I loved it. In particular, that first poem, “Then for the Seventh Night” resonated in me, the way a word echoes throughout the spaces of an empty church. The different movements and phrases of the poem haunted me throughout that waning winter and into spring. I couldn’t shake it, nor did I want to.

A forsaken man stumbles into a forsaken church, remembers a song he doesn’t want to remember and spontaneously begins to sing it because he can neither help nor control himself. He’s been on a “mission,” but details of the mission elude him (and us) and while he is singing, he notices the decayed state of the church, the sounds of life that pass through an abandoned place of worship. He misses his mother, considers and sings about her absence even though he distrusts his own voice and even though he no longer wants to sing. But the song won’t let him stop.

How could I not have been moved the first time I heard this? By this anonymous everyman who “strayed / into the vacant church” to “kneel in the aisle / with his hands in his shirt”, to sing a song that “he wished not to remember”. Why were his hands in his shirt? This detail is so strange–made stranger, of course, by the final stanza of the poem:

He hadn’t meant to go on so long. He hadn’t meant
it. But the song would not go.
And the words no longer sounded like words.
Though he sang with his tongue behind his teeth.
Though he struggled to remove his hands from his shirt.

Whether I’ve been aware or not, poetry has been and is my religion. There are still countless times when I look at my own poems and think, “How did I travel here?” or “This isn’t what I set out to do.” But a poem takes over–through me it writes itself, using what I witness, what I feel, have felt–what I remember, even if I didn’t want to remember. Each poem is a “mission,” “the song // whose disjointed verse” I repeat. And like Levine’s speaker, my “voice // was not good and even” I distrust my voice. I never thought I’d become a poet. I never thought I’d be writing about family and the consequences of trauma. “But the song would not go.”

Less and less, I reject the wonderful offerings of my partner. I’ve become an attentive listener, considering all the things around me. I’ve learned a lot about devotion, and devotion to poetry from this poem, as well as how to write, how to love, hell, even how to be.

Diana Khoi Nguyen lives in Pennsylvania, where she is completing her first manuscript. Recent poems have appeared in Poetry, The Collagist, Memorious, and OmniVerse.