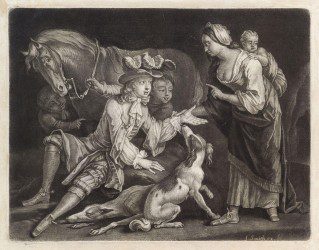 Editor’s Note: On the winter solstice, the B O D Y editors found themselves ensconced in a velvet-lined chamber exactly half-way up an ancient tower in the heart of Prague, on the street where Rainer Maria Rilke was born. As we were discussing the thermodynamic properties of semicolons, a Scotch mist roiled through the room, bearing in its midst a raven-haired girl who introduced herself as the one who made her bed in Rilke’s ear. She proceeded to divine from our crow’s feet these predictions for 2014, before vanishing into a bottle of Glengoyne 21-year-old. Herewith:

3. In April, Graywolf Press will publish James Franco’s debut poetry collection, Directing Herbert White. It will sell thousands of copies and be widely derided by critics, except William Logan, who will give it a glowing review. Franco himself will direct and star in the film adaptation.

4. Christian Ward, David R Morgan, Andrew Slattery and Graham Nunn will rebrand themselves as Conceptual Poets, and be feted by all and sundry.

5. After being named “Poetry Commandant” of the Senegalese Army, Anthony Madrid will change the name of the country from Senegal to MADRID and start a war with Spain. Failing to commit Spanish forces to a protracted conflict in central Africa, he will began an imperialistic invasion of other African countries, naming each one in succession MADRID and issuing royal decrees (he will be “queened” several times over), requiring all villages and newborns to be likewise named MADRID. After several successful conquests, he will wake up. Africa will be undisturbed and, thus far, unnamed MADRID. Madrid will be troubled by a curious humectation in his sheets.

6. New paper deposits will be discovered in the underground library of Atlantis, leading to the reckless popularity of Sports Utility Typewriters.

7. Although Breaking Bad was known for its references to poetry (in particular Whitman), it will happen that the real poetry lover is the crooked attorney, Saul, of the new show, “Better Call Saul!” who will secretly strip to his tighty-whities each night, inhale Certs with Retsyn, and recite Henry Wadsworth Longfellow as part of a particularly erudite sexual fetish.

8. You will continue to be so blessed and humbled to know so many truly amazing people who somehow always find a way to remind you what life is about, and to be able to share those little moments that seem, like, so insignificant, but just need to be shared. You know? Like in May, when you’ll walk to work without stepping in any blood and will just feel so lucky and so incredibly fortunate that you have to update your status to let everyone know.

9. A St. Louis-based start-up will innovate a system known as “Verse from Above,” whereby Billy Collins will be transported by drone to occasions including marriage proposals, Bat Mitzvahs, funerals, and car wrecks, to recite poetry punctuated by the staccato melody of a recording of a homeless man wailing on the throaboe, a custom-made oboe played through his tracheostomy.