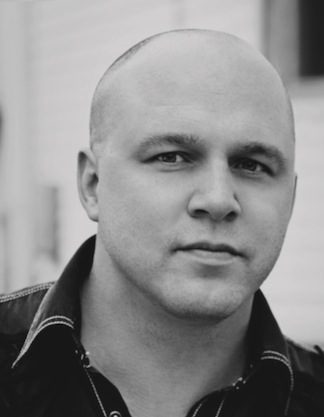 A common complaint against contemporary English-language poetry is that it imposes barriers (suspectedly arbitrary) between the poet and the reader. Matthew Olzmann’s debut collection of poems, Mezzanines, is not that sort of book. The poems speak with clarity, are playful but hold weight and a certain underlying melancholy (like Olzmann in his author’s photograph: simpatico, solid, sad-eyed). The manuscript for Mezzanines was awarded the Kundiman Poetry Prize in 2011.

The cover art is Dali-esque in its tottering instability, showing a couple stranded in a tree which grows atop a pile of rocks in the middle of an ocean. It could be taken as a visual representation of the worldview presented within the book.

Olzmann’s big-hearted and often Yoda-like poems speak in a softly conversational tone, imparting intimacies, wisdom, and these are love letters to the world but a world he doesn’t fully trust. There’s alienation in how his poems often zoom out and away from Earth and into outer space whenever he’s struggling to find an earthly connection. This sense of alienation is apparent in the poem “SPOCK AS A METAPHOR FOR THE CONSTRUCTION OF MY RACE DURING MY CHILDHOOD” which concerns Olzmann’s race (he is Filipino/German). Olzmann sneaks the galaxy into the poem:

It went like this: you knew you could fly
until your first attempt left you with two broken teeth

You knew you were like all the other kids
until your best friend said, No you’re not
And he was right. And in that moment something shifted.
The galaxy became real, and in its realness, the asteroids
seemed so much closer than you thought.

Mezzanines is an act of communication and Olzmann’s unique perspective binds the book together as a collection. He’s constantly probing for contact and yet seems to find answers among the outcasts, the misunderstood: Bigfoot, the Loch Ness Monster or a shipwreck at the bottom of a lake to which he addresses a series of letters. Olzmann wants answers from the boat, an object currently experiencing extremes of isolation and loneliness. He begins his overture tentatively and yet insistently:

Even though you’re over a century old, they say that
everything inside you is still intact. Even the crew? Must be
lonely. I’ll write again.

then continues as a student might, sitting at the feet of a mentor:

So what’s it like to have everything inside you
still “intact”? That’s what I want to feel like…

…every
time I speak to you, I’m talking directly with God,

if this is the case: Lord, I noticed you haven’t written back yet.

As the letters continue Olzmann starts to use the voice of a spurned teen, first sending a letter containing a haiku he has written for his sunken ship/ pen-friend and then becoming petulant when the boat fails to send back word:

Fuck you boat. I don’t care if you didn’t like that poem.
That’s no excuse for ignoring my letters. I will say this real
slowly for you:

Renounced by the world, unable to find, or rejected by peers it is little wonder the speaker in Olzmann’s poems feels unsafe in the world. In the (frankly, brilliant) poem THE TINY MEN IN THE HORSE’S MOUTH he becomes a little more explicit about his fears. He begins with a quote by the comedian, Dan Cummins:

“Never look a gift horse in the mouth? But what if on the horse’s tongue there’s a tiny little man playing piano? Why would you not look at that? That’s incredible”

and builds on it, adopting a lulling cadence of menace:

It’s why the gift horse is a gift,
and there is always a tiny man inside,
though sometimes more than one.

You should look; peer as far back as you can,
because if he’s not playing piano,
he and his friends might be sharpening
blades inside that dark, inside
the horse’s belly, inside your sleeping city…

…The war is ending. Achilles is dead.
Paris lives on in shame.

And one man
plays piano as the city burns…

Olzmann turns abruptly away from metaphor before returning to it again at the close of the poem:

…The phone calls in the middle of the night.
Hospital beds. Friends staggering in,
and the world on fire. The horse’s mouth…

…Whoever told you not to look at this is hiding something,

because the world is beautiful,
haunted, and begging you to receive its offering.

May you never find such music again.

The way each line unrolls perfectly into the next, the ease of movement through his poems, Olzmann has a good ear and his work reflects that. The material is dark but he never makes it seem overly so. He knows what awaits: nothing pretty, yet is able to turn these frightening images into his own beautiful music. It is through this determination to keep seeking a connection to God, to finding his kin, his people, that Olzmann saves himself. Hope is the thread which runs throughout the poems, and it is interesting to note that when Olzmann is struggling to make sense of the world, he leaves it behind and goes astral traveling but conversely, when he makes a close connection, it is invariably with a very specific person or thing.

In “LOVE POEM DISGUISED AS A MOUNTAIN DEW COMMERCIAL” a bottle of mountain dew serves as very contemporary metaphor for his wife’s love. We see the tenderness from which he derives hope, and a lightness enters the poetry:

So here’s what I’ve got, the reasons why our marriage
might work

Olzmann still needs to slip a might in there, and yet, here is someone who understands the poet, and whom he can understand:

Because you memorize songs, even commercials
from thirty years back and sing them when vacuuming.
You have soft hands. Because when we moved the contents
of what you packed were written inside the boxes.
Because you think swans are overrated and kind of stupid.

And one day five Summers ago,
when you couldn’t put gas in your car, when your fridge
was so empty–not even leftovers or condiments–
there was a single twenty-ounce bottle of Mountain Dew,
which you paid for with your last damn dime
because you once overheard me say that I liked it.

A clue, perhaps, to the identity of the couple in the cover-art tree.

Always yearning toward the outer geographical and mental limits in his search for oneness and truth, Olzmann finds the divine in a bottle of soda, and glimpses it again in a humble river beside a highway in “A RIVER, BRIEFLY PARALLEL TO AN EIGHT-LANE SUPER HIGHWAY“. The insertion of the vast and ugly highway into the title is clever, as is the allusion to hiddenness and brevity:

In the ravine the water seems to know the path
to the rest of the water that hums ahead, miles away…

…how it’s performed
its task for centuries,
how it’s memorized
the contours of each dip and crag…

…the fat
stones, the trunks of fallen trees (it believes
it must touch them all in the same
perfect order each time!)…

…And when the water of the river
meets the water of something larger,
it never asks how or why it got there,
it doesn’t question its purpose or wonder where it’s going:
it just glistens, rushes forward, and is gone.

There’s the old story of the NASA computer which beams a constant message out into the universe, trolling for extraterrestrial contact – and like the government, Olzmann just wants to be friends:

Let’s try to climb over the mess we’ve made of this place.
I am trying to do that. I am sitting in front
of a blue screen, hitting a button over and over,
trying to send you the following message:

Hello, I am your friend.
I am wishing you happiness.

Mezzanines is, without doubt, one of the finest debut poetry collections I’ve read this year. I’d get it but I already have it.