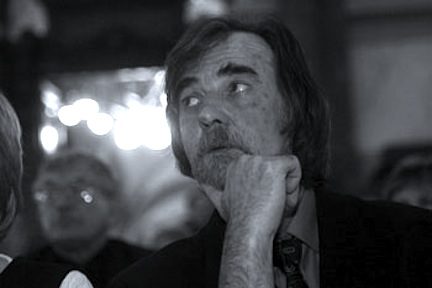 A ROCK IN SEPTEMBER

Time present and time past…
What might have been and what has been
Point to one end, which is always present.
–T.S. Eliot

I AM
in Henry Moore’s country once again
in the briar
which burns peaceful and blue
as liquor
in the rocks
and your calm briars,
rock light
rock rock
rock salt
in a country without nests,
above the letter opener of the road,
above a sheep who bleeds here
peaceful and blue, where the birds…

won’t fly south for the winter.

ALL FEATHERED THINGS
can flit and wing. The bat,
the angel cast out of the brush,
and the feather bed’s fat goose. Veronika,
the salty pebble,
smiles. She shatters
the golden patches of ice,
her hands
in my glove. Released,
her fingers fly in all directions.
They take off, peck at the snow.
The snow takes to the sky. Its feathers fly.
We play:
Legged creatures all
must finally fall.

The snow wallows in the ashes.

I wave August’s branch
until my hand dries
we play:
the king calls out his troops
Lonely Lieutenant Apollinaire
bellows through his dressings:
Let’s strike from the flank
bim bam boom pif paf poof

I wave a green branch
until the sawdust swirls
savagely I snap my fingers
until they fly about
like wood chips
The only thing I keep is my thumb:
1) for remembrance’s sake
2) for plugging up key holes
3) for Veronika to play with
4) for its print

A CHIAROSCURO –
Moore’s country. A statue of a woman
inviolate as an egg
stands there
under the heaven laid bare.
Arching backwards
there, somewhere…
whence and where
are equally far
she lifts the hillside with her shoulders
and hollows out a ravine
with her elbow

A briar fire pit
cuts off the road.
Wax drips.

Quietly it rises
to the line
where the sky’s water
has already fallen.
The salty pebble,
my daughter, sleeps
with sleepy hair,
transparent
at the foothill of September
like a bunch of onions
hanging upon the beams
of the arbor soaked with rain….

My chiaroscuro
of Moore’s luminous country

they point their fingers at me
they tempt me to play
grab me by the finger to make me take my turn
by the nose ears hair,
scruff of the neck one after the other:

OLLY, OLLY, A SCOTCH FOR ME
I start a game with Veronika.
She’s lived four years in the land
of rocking horses
and me twenty-eight
on an as yet unnamed
street of an as of yet unnamed city,

Everything that draws away
draws close to her

the same way everything that draws close
draws away from me.
The words rise
from her milky throat
like snow. There’s no edge,
everything’s round.
Proximity and distance
converge in the vertex
later they’ll her
is called love.

Meanwhile, she’ll choke
the duckling with the same
devotion she’ll use
a moment later to perform
its funeral in the back garden.

Meanwhile, she’ll feel as sorry
for the bark of a sapling gnawed by a rabbit
as she feels for the rabbit’s hunger.
There’s no edge, everything’s round,

like the words rising like snow
from her milky throat
in the country of rocking horses
and ducklings
alive and dead.

THE PAST AND FUTURE
tense, what might have been
and what has, aims
towards a single goal
that’s ever present.
I come full circle.

After twenty-eight years, among
the classmates, books,
wife, traveling companions,
life companions and those half-dead
I have a daughter. A moment later
the circle turns, a woman,
her life
chipped away
in layers
in children
in sheets:
transparent and opaque
like mica.

Proximity and distance
converge in a nexus,
someone tells her is law
and someone else reconciliation.

don’t bluff, don’t bluff lay
your cards on the table
rip apart his sleeves at the seams
describe him:
is he playing dead?
or alive?
does he have hair growing on his palm?
what color?
did he go with school on a field trip?
to říp*?
olly olly a scotch for me?
what statue is he talking about?
does he believe the tale about the mare that hatched from an egg? **
is it disappointing that he doesn’t?
did he smuggle out obscenity’s record
did It flash its tits/
its mottled bits/
A birthmark for every year that’s done/
Each Czech predicts the future to come
if so whose future and at what time?
today how does he weigh the future?
sometimes does he judge something for something?
if so on what is his decision based?
maybe his ears will swell like cauliflowers?
his head like a pumpkin?
his genitals like moss?
and so on?
where?
or which way?

HERE AND NOW AND AGAIN
under the sky laid bare,
in Moore’s country,
with a statue of a woman
her lips aching
from glassy peach fuzz.
And never right now
and nowhere right here.
In the circle.

The way up and the way down are one and the same
and I’m returning
again with one foot out the door
The slow splinter goes round and round in the blood
of Moore’s sculpture.
The years’ rock drops.
Rock of flight.

The words change, the language stays the same.
We find only that which makes us slip away
Nearby and never near.
We can speak up only by shutting our mouths.
I’m skin and bones and I cast a fleshy shadow.
Far, but never far off.
I can plead my case only with my very own indictment.
Day’s rock drops.

* Říp Mountain is a dormant volcano that rises from out of the flat plains surrounding Prague. At the mountain’s summit, according to legend, Forefather Čech, looking down below him decided this place was where he would settle, thus beginning the history of the Czech people.

** This is an allusion to the fairy tale about a foolish country bumpkin called Honza who convinces an equally silly farmer that he can hatch a mare from an egg. A sly old hag, taking advantage of their mutual stupidity, sells the farmer an egg from the market and tells him a new mare will hatch out of it, if the farmer places it under his old one.

PAVEL ŠRUT (1940) is a renowned award-winning poet, essayist, writer and translator who belongs to the generation of post-war Czech writers whose voices gained prominence in the flowering of Prague Spring, voices silenced in by censorship in the aftermath of the 1968 Soviet Invasion of Czechoslovakia. Once his collection Worm-eaten Light (Červotočivé světlo), his elegy for his fallen homeland written in the months following the Soviet Invasion, was banned, Šrut stopped writing poetry for ten years because he felt, in an occupied country without the freedom to express himself openly, poetry no longer had any meaning. Ultimately, the need to speak won out and he began writing again, publishing unofficially, although his voice had greatly changed in the intervening years as a result of its being suppressed. In 2000, Šrut earned the Jaroslav Seifert Award in 2000, for the compilation of his samizdat works, Paperback Poems (Brožované básně) and his screenplay in verse, Evil Beloved (Zla milá). In 2012, Šrut received the Czech PEN club’s Karel Čapek Prize for lifetime achievement in literature. His work as a poet testifies to the power of poetry and the human spirit that can overcome the forces that would silence an individual’s will to speak the truth. Aside from being a poet, rock lyricist and translator, Šrut is also a celebrated writer of children’s literature. The first volume of his trilogy, The Socksgobblers (Lichožrouti), garnered all the top literary awards for children’s fiction in the Czech Republic and was nominated for the prestigious Hans Christian Andersen prize. The third and final volume of this beloved series has just been published. He is currently at work on the screenplay for the animated film of Socksgobblers.

DEBORAH HELEN GARFINKLE is a writer, poet and translator living in San Francisco. Her criticism, translations and creative writing have appeared in literary reviews and journals in the US and abroad. Worm-Eaten Time: Poems from a Life under Normalization by Pavel Šrut 1968-1989, is Ms. Garfinkle’s second full-length translation from the Czech. Her first book, The Old Man’s Verses: Poems by Ivan Diviš, was nominated for the 2008 Northern California Book Award. In 2012, she was awarded both a Translation Fellowship from the National Endowment of the Arts and a the PEN Center USA Translation Grant for her translations of Pavel Šrut’s work. Selected poems from Worm-Eaten Time have appeared in TWO LINES, Tri-Quarterly Online and The Massachusetts Review. A longer poem, “Survivors,” has been selected for Landmarks, the 20th anniversary installment of the TWO LINES print series, published fall, 2013.