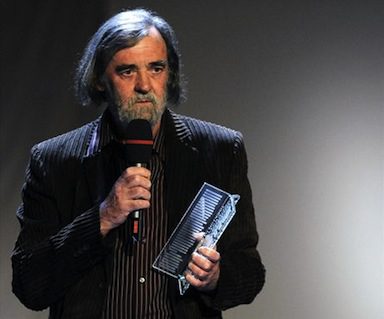 SLEEP’S DAMP MICE
and matted fur in the floorboard
cracks, along the newspapers, in the whitewashed crotch
of the exposed walls.

Silently, the silent mold
sounds its tenuous
bell. A woman lies down
beside me, her head

a huge washed beetroot.
A draft from the windows
blows out a candle
in the sockets of her eyes.


A FAIRYTALE ABOUT ME. THEY’VE HARNESSED
a Billy goat under an ironwood tree.
With flour, I polish his nostrils, me,
groom and recruit, and the bride, she’s

The second time, the bride’s on a rock
holding a small snake in her hand
and he, a blindworm. The third time,
I’ll come back, this time forever.

PAVEL ŠRUT (1940) is a renowned award-winning poet, essayist, writer and translator who belongs to the generation of post-war Czech writers whose voices gained prominence in the flowering of Prague Spring, voices silenced in by censorship in the aftermath of the 1968 Soviet Invasion of Czechoslovakia. Once his collection Worm-Eaten Light (Červotočivé světlo), his elegy for his fallen homeland written in the months following the Soviet Invasion, was banned, Šrut stopped writing poetry for ten years because he felt, in an occupied country without the freedom to express himself openly, poetry no longer had any meaning. Ultimately, the need to speak won out and he began writing again, publishing unofficially, although his voice had greatly changed in the intervening years as a result of its being suppressed. In 2000, Šrut earned the Jaroslav Seifert Award in 2000, for the compilation of his samizdat works, Paperback Poems (Brožované básně) and his screenplay in verse, Evil Beloved (Zla milá). In 2012, Šrut received the Czech PEN club’s Karel Čapek Prize for lifetime achievement in literature. His work as a poet testifies to the power of poetry and the human spirit that can overcome the forces that would silence an individual’s will to speak the truth. Aside from being a poet, rock lyricist and translator, Šrut is also a celebrated writer of children’s literature. The first volume of his trilogy, The Socksgobblers (Lichožrouti), garnered all the top literary awards for children’s fiction in the Czech Republic and was nominated for the prestigious Hans Christian Andersen prize. The third and final volume of this beloved series has just been published. He is currently at work on the screenplay for the animated film of Socksgobblers.

DEBORAH HELEN GARFINKLE is a writer, poet and translator living in San Francisco. Her criticism, translations and creative writing have appeared in literary reviews and journals in the US and abroad. Worm-Eaten Light: Poems from a Life under Normalization by Pavel Šrut 1968-1989, is Ms. Garfinkle’s second full-length translation from the Czech. Her first book, The Old Man’s Verses: Poems by Ivan Diviš, was nominated for the 2008 Northern California Book Award. In 2012, she was awarded both a Translation Fellowship from the National Endowment of the Arts and a the PEN Center USA Translation Grant for her translations of Pavel Šrut’s work. Selected poems from Worm-Eaten Time have appeared in TWO LINES, Tri-Quarterly Online and The Massachusetts Review. A longer poem, “Survivors,” has been selected for Landmarks, the 20th anniversary installment of the TWO LINES print series, published fall, 2013.