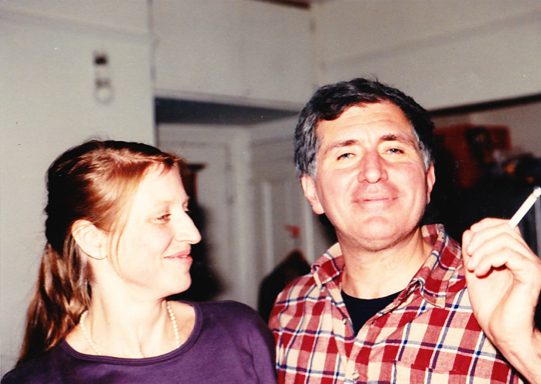 Erje Ayden died on Thursday, October 10, 2013, in the company of his wife Lisa – 9 minutes before their 28th anniversary.

I met Erje Ayden when he was already sick. It was two years ago at the Performing Garage in New York, at a benefit reading to help support – both financially and psychically – him and his wife, Lisa. Not that they would have asked for help. But I suspect that their close friends Jim Fletcher and Kate Valk insisted on the event, knowing that the experience of an author hearing his words performed by such a talented lot (including Scott Shepherd and Sibyl Kempson, as well as Kate and Jim) would give him perhaps enough power to make it a little further along in what I learned was a very painful and terrifying journey. I walked into the theater and saw Erje lying on a couch on stage, with Lisa close by and surrounded by friends, and a larger audience of the downtown community. His body was ravaged by a particularly vicious form of Parkinson’s, and he could barely move. On a table by the wall lay his life’s work: dozens of books – novels, novellas, collections of short stories, other texts that defied classification – all printed, it seemed, by hand. I was intrigued by the reading and bought as many books as I could.

In December, Sibyl and Kate and I had Christmas dinner with Lisa and Erje at their 1-bedroom apartment in the West Village, where Lisa had lived since 1968. It was then that I realized how special a world I had entered – an amalgam of Finnish and Turkish heritage steeped in decades of old New York, a hospitality and humility that defied the commercial bloodbath out the window, a traditional Scandinavian menu and a bottle of Fundador immune to the concerns of presentation. We had just finished a whirlwind of projects, and it was a lovely, calm, and healing occasion. As Sibyl said later, “They’ve dedicated their lives to the art,” and had done so in a fashion that, if not practical, could only have happened at a time when the city had a fundamentally different relationship to its artists.

Over the last year there was another reading, and we visited them many more times, often bringing along our dog, Rey, who helped Erje find some moments of peace. The disease stripped Erje, in time, of the ability to read and to write, and eventually, to talk. It’s hard to fathom how frustrating it must have been for “a man of words,” as Lisa said, “to lose his words.” And it’s equally difficult to fathom her own patience and strength in countering the rage and toil of such a fight. But despite the rebellion that was occurring inside his body, Erje’s sense of humor and mischief would rally. As I packed up his car for what would be his final trip out to his old home in East Hampton – where many years ago he had befriended Willem de Kooning and Frank O’Hara – his eyes gleamed and he raised a finger and said, “If anything happens to me, tell them it was my wife who did it.”

ERJE AYDEN was born in Istanbul to a Turco-Russian family. In the 1950s he worked as spy in Paris. He moved to New York in 1957 where he started writing performance and prose pieces and befriended, among others, Willem de Kooning and Frank O’Hara. In the 1960s and 70s his novels The Crazy Green of Second Avenue, Sadness at Leaving, and From Hauptbahnhof I Took a Train became cult bestsellers, and he has since published over two dozen books, including Lost Cloud, a collection of short stories from the last 50 years.

Editor’s note: Erje’s books now are available only in very limited editions on etsy – see the links to selected titles above. If you’re interested in more of his works, please contact Ben Williams.