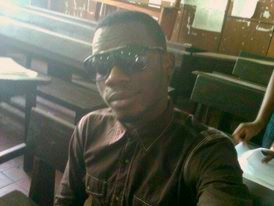 The melodious speakers turn us to
Music. The officiating Imam dedicated
The baby girl to Allah on a disco dance
Floor – my friend is a father at 26. 26,
The age dad had my sister.

My mother was beating inside my
Father’s heart, when my sister fell
From her womb like a
Leaf from the tree.

My father stole money with ink and
Paper – my sister grew up in a court-room.
She saw ghosts, wearing silk gowns
And wigs.

My grandmother paid for my father’s
Mistake, with loans from her bank – I
Was conceived under his prison
Uniform. That was the last time he
Stopped being my father.

It was a long time ago – so long that
Dad had forgotten he ever lost his
Virginity to my mother.

Now that the sun has fallen upon the
Plants, like sawdust on a wood-carver,
Feeding their greenness with that
Desirable harshness.

Now that the cocks crow, chickens chirp,
Under roofs of houses,
Lizards lay on fences – seeking to
Crush our favor for breakfast.

Now that songs from speakers have
Taken the street – the revving of
Motorcycles, tricycles and vehicles
Has taken the road.

Now that I have no other place to go,
I’ll go into my grandmother’s fingers,
Wrap myself with her blanket,
Pick a sheet of paper and a pen,

And I’ll rewrite my childhood.
Amputate my father’s hands and
Legs with this ink, like rebels
Viciously chop innocuous civilians –

My childhood will lack nothing
Nothing at all.

D.M ADERIBIGBE is a Nigerian undergraduate, currently studying History and Strategic Studies at the University of Lagos. His work has appeared in Poetry Kanto, Rampike, Word Riot, and the anthology, Kind-of-a-hurricane Press Best of 2012 Anthology – Storm Cycle, among other places. He lives in Lagos.