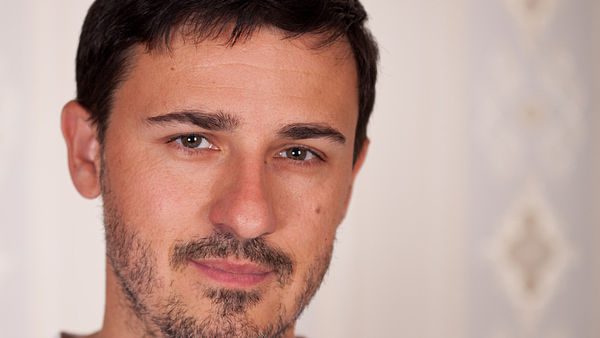 —Translated from the Czech by Nathan Fields

September begins, brushing across your neck with its fox tail,
you sit with your back to an open door, a door
to the long corridors of an empty house,
these corridors continue further and turn into a forest
with an underground burrow in which anything can happen,
and anxiety wheezes through this very forest, through those corridors,
from that burrow in which anything can happen.

Yellow and rusty layer of leaves
peels off like old skin,
light sprays along houses, cars, fences
and pours over a greyish face in the window — it’s me,
life behind me, another life before it
in a series of small advances.
This moment is only a delay:
tomatoes,
waiting blankly at the executioner’s block,
on the verge of exploding and sourly burning
the impression of morning, scorching the light,
burning the face.
Victorious tomatoes.

I WILL BE THIRTY-THREE

They leave me alone
and while the kettle gurgles like a hen,
it occurs to me that at my age,
Ginsberg and Corso had written
the most beautiful poems:
about a girl from Park Avenue,
the idea which is everything
the poet knows about death.
Even I am sometimes seized by an itch
which cannot be relieved before one
slumps down in transformation,
as if an ugly flower were scrabbling up out of your chest
and someone else were peeling away the petals,
yet it was as if you had torn out a wart,
something revoltingly yours,
penetrated by fate,
veined with felty tissue,
expressing itself with sweat,
which is a manifestation of craving
but also of openness
when I address myself in a whisper
here at this lamp, here in this darkness —

MILAN DĚŽINSKÝ is a Czech poet and translator from English. He graduated from Czech literature and English at the faculty in Ústí nad Labem. He has published five books of poetry: Černá hodinka (Velarium 1996); Kašel mé milenky (Host 1997); Slovník noci (Host 2003); Přízraky (Host 2007); and Tajný život (Host 2012). The latter three were shortlisted for the annual Magnesia Litera Book Award. He lives in Roudnice nad Labem where he works as an English teacher.

NATHAN FIELDS has translated contemporary Czech literature into English in the form of novels, short stories, screenplays and scripts, and poetry. He has received praise for his translations of Jan Balabán (Zeptej se táty) as well as works by Jáchym Topol, Edgar Dutka, Petra Hůlová and Miloš Urban. With a degree in Literature and Writing, he has been teaching English and translating in Prague for over a decade.