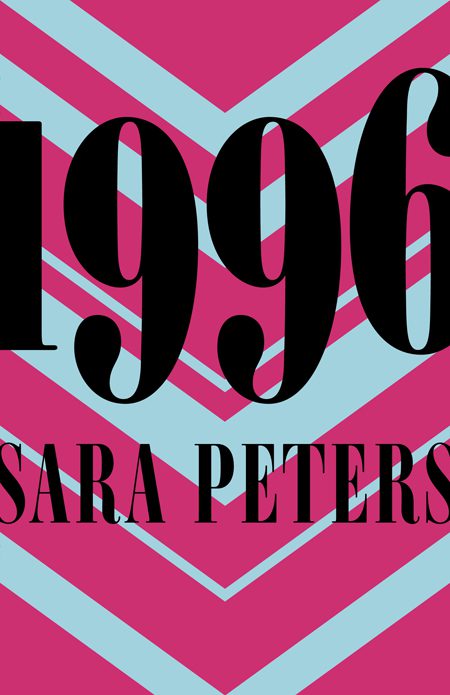 In our Spring Reads, we anticipated the arrival of a number of poetry books due out in early 2013. Among them was Sara Peters’ 1996 (House of Anansi), a debut so fully realized it is hard to believe that it is the poet’s first. Peters, a rising star in Canadian poetry, establishes a voice that is distinctly her own. With freshness and maturity, 1996 carries the reader through subjects that are, in Robert Pinsky’s words, “deeper than mere darkness.”

By turns sharp, riveting, thrilling, profoundly beautiful and deeply disturbing, 1996 is as hard to put down as it is to forget. A killer debut, the poems are superbly titled, generating both curiosity and anticipation in the reader, and are arranged in such a way that they pull the reader through the book. A page turner, the poems seem almost aware of one another, though they are distinct, standalone works.

The surreal, almost extreme realism of the opening poems includes an intense, violently remembered love affair with a babysitter, the dissection of a gopher by a cousin, and an amputated finger. The closing poem of the first section, opens:

From the beginning
you should know I’m embellishing.
But was I ever 12?

It refers back to what we’ve just read, and what is about to come next. It is as if Peters, in her supreme awareness of the reader’s mind – or at least the reader’s response to her mind – is both acknowledging disbelief and enforcing its suspension.

The permanent alignment of the factual and the fantastical allows Peters to explore subjects that routinely crush lesser writers (incest, masturbation, acts of physical and psychological violence …) without succumbing to the vulgarity of false verisimilitude. She evokes the random cruelty of children, the arbitrary cruelty of nature, in terms that are immediate, precise and real. Despite the often brutal savagery of her subject matter, her willingness to look – and to force us to look – works because she is able to write poems that confront horror without horrifying the reader. And it works because Peters is keenly, almost persistently aware of the complex and relative truths of memory. Her poems remind us that even when its truths are apparent, they are elusive; that there are no true or untrue stories of the self. She wants the reader to look, but also not to trust what she sees.

It’s a gamble, and one that risks alienating the reader. That Peters pulls it off is a credit to her particular sense of empathy – her understanding of what it’s like to read poems like hers. There are few gratuitous or frivolous gestures in her work, and it is perhaps this, above all, that already marks her as a mature writer. And she exploits her precious mastery with glee. That Peters enjoys her poems, and the stories they tell, is apparent in the way she repeatedly, and often pranksterishly, sets up and subverts the reader’s expectations. Take the poem, “Abortion”, which starts, presumably in response to its title:

I hated it; I expect everyone secretly did.

I hadn’t yet seen blood besides my own,
and then only from a knee or finger.

Then she pulls the rug out from under our feet. What we take for granted as the presumed referent of “it” (abortion) is refocused on something entirely different and unexpected:

Posters were distributed according to age:
I was six, and so given the six-week photo.
The adults got second

or third trimester blowups.
We split up, to catch cars both ways.
One poster featured a twenty-two-week fetus, its head held
by latex fingers, an American quarter

sitting in the surrounding blood,
flipped to the side that said
In God We Trust.

As the poem unfolds, the presumed horror gives way to the real horror of the child forced to serve as a prop for a greater cause; the child herself refocused into an image of death the size of a quarter.

1996 is very much about the flipping of expectations – especially those that are designed to enforce an image of the world as something positive and nice. In fact, the conceit of “niceness” itself appears to be Peters’ enemy number one – which might seem odd, since the voice that carries you through these poems is warm, unpretentious, and kind. But the kind of niceness Peters goes after is the kind that she views as inherently false, and therefore dangerous. Whether it’s Canadian niceness, the niceness of little girls, the niceness of the countryside and rural life, Peters’ direct, often clinical language is ready to turn on (or turn off) the lights, exposing the danger, the threats, underneath. And with style and wit, her poems revel in their ability to challenge, subvert and rip open the narratives we use to lull ourselves, the lives we take for granted.

If 1996 is obsessed with anything, it is with ripping things open, exposing them, challenging the implicit status quo that surrounds grand notions of the self. Yes, there are murderers in Canada, and not all of them are nice. Growing up on a farm does not mean being blessed by golden fields and endless sunshine. And little girls have all the niceness of any other human being growing up in a fucked up world, discovering what it means to be human in ways that are less than fairytalesque. Peters is very much a poet of memory, and memories pervade this collection. To say they are “raw” or “honest” would be trite. Honesty is not the point. The rawness is in the image, the poet’s unfiltered, yet deeply distrustful gaze. Even those memories that seem sharpest, and most immediate, resist easy observation. It is as if she stands at a distance from herself, yet not in a state of denial, but of hyperawareness.

Appropriately, the collection ends with a memory of a woman visiting her childhood home and finding herself, alone for once, in her childhood bed. The poem, titled, “The Last Time I Slept In This Bed”, is about the kind of sex of you have with yourself – and in true Peters’ style, it is underlined by the violence that is inseparable from the self – that which may be inflicted on others, or restrained, contained, suppressed, or made “nice” – but never, ever eliminated:

The Last Time I Slept In This Bed

I was involved in the serious business
of ripping apart my own body.

I’d run my fingers over it,
seeking but never finding

the right point of entry,
so having to tear one myself

Peters tears a hole in poetry with her first book. I can’t wait to see what she does with her second.