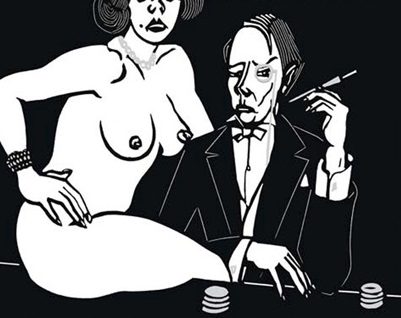 Open the pages of one of Marek Krajewski’s Eberhard Mock novels and you plunge into a unique and haunting world. It is a world pressed between the oppressive shadows of the two World Wars and seemingly losing its mind because of it; a world of secret societies where the borders between the practitioners of the occult, con-artists and the criminally insane are often impossible to determine, of pallid aristocrats who stand unblinkingly at their wives’ bedsides as they get ravaged by another man, of cocaine addicts who work as police informers and fascist leaders who moonlight as pimps, and of a former classics scholar turned police detective who thinks nothing of beating a suspect to death to get the information he needs.

People read crime novels for a multitude of reasons. One person might like the mental gymnastics of trying to solve a ‘whodunit’ while another gets off on all the bloodshed and gunfire, or finds a paradoxical comfort in seeing a world depicted in various shades of black. For some readers a crime novel provides an entry point to a specific place and time, from the deceptively peaceful life of an English country manor to the rough streets of Prohibition-era Chicago or a bleak, snow-filled Scandinavian landscape.

What might diverge even more widely than all their readers’ varying motivations is what crime writers aim to achieve in their work. Your average hack might be content with surface-level entertainment but the best writers are all over the map in their literary objectives, as if the crime element in their books is only incidental, or as if they use the same sinister means for widely differing ends.

Polish crime writing is still in its early stages, all the more so for readers whose only access to it is in English translation. Yet its writers are a good example of the variety of ambitions grouped under this deceptively simple and often condescended to literary genre. One aspect that stands out though is the way some Polish crime writers have turned to history in their work, not as a scenic backdrop but for literary, artistic or historical purposes.

One example is using a crime-driven plot to deal with complicated and controversial historical issues , as Zygmunt Miłoszewski did for Polish Jewish history in his recently published Grain of Truth or for communism and the years after 1989 in the earlier Entanglement.

In the Eberhard Mock novels, almost entirely set in interwar Breslau (today’s Wrocław), Krajewski does something very different. For the most part ranging from 1919 through World War II the books neither take on nor avoid the historical menaces always lingering in the background. The mass murderers have to wait in the wings while the serial killers who kill only a handful of people are given their time to shine. In this part of the world these two short decades were a brief burst of individual expression – for artists and writers, but apparently also for serial killers and single-minded police detectives too. For all the decadence Krajewski depicts (and he depicts a lot) it’s clear that he is bringing to life a colorful world that has become completely extinct, that after the ravages of the war, postwar ethnic cleansing and decades of communism can never be recovered.

What gives Krajewski’s work a particular depth is that not only do you get a sense of continuity from book to book in terms of characters – the aristocrat who is cold and unfeeling to the point of ruthlessness, the power-hungry subordinate-type who gains a stronger and stronger foothold as the Nazis come to power – but that certain themes come back again and again, and that these themes seem almost out of place in a crime novel, or as if the crime aspect of the book is there for camouflage.

One of Krajewski’s major concerns is trying to navigate intensely close emotional relationships – typically between a parent and child, but also between husband and wife – where communication breaks down and is replaced by obsession, fear and a need to control. It’s ironic that many people who wouldn’t read a crime novel might be interested in reading about the intense bond between a widower and his independent, strong-willed daughter and the agony they both go through when she finally breaks away. This is a pattern that repeats itself in various forms throughout these books. Krajewski connects this relationship to the crimes taking place, so that the child’s independence comes with a danger attached. You read to see if their unwillingness to listen to their unreasonable father’s restrictions not to go out because it’s dangerous, for example, which seem so similar to his usual grumpy attitude, will result in their being murdered, but you also read to see how the relationship resolves. If and when they survive you want to see the two sides take a step towards one another. These are crime novels only while the criminal is at large.

US (from Melville House Press):

Still to be translated: