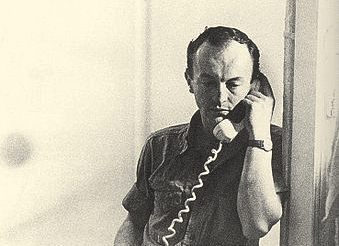 I first came across Frank O’Hara’s poetry in a small, square-format Grove Press paperback titled Meditations in an Emergency (the same edition that appeared in a recent episode of “Mad Men.”) I saw myself as a budding poet then, though more in terms of image than substance, since I wasn’t writing much poetry but, instead, spent most of my time trying to hook up with girls. Which is why I was in New York City, AWOL from university: to go out with my great unrequited high school crush, luscious, dark-haired Carol D’Agnello.

I was staying with my college roommate Eliot at the Greenwich Hotel, a Bleecker Street flophouse a few doors from the Café Au Go Go, the small club where I’d heard The Blues Project, Lothar and the Hand People and, one memorable New Year’s Eve, Frank Zappa. The hotel’s rooms resembled prison cells and we shared the communal wash trough with beaten-down men for whom the place was the last stop before the streets or the morgue. But it was cheap, and I needed money to properly entertain Carol. However, what man proposes, Mr. D’Agnello disposes. He took one look at my long hair and scruffy denim jacket and jeans and threatened to throw me down the stairs if I even thought about doing with his daughter what he thought I was thinking about doing.

The next day, with unexpected time on my hands, I went to the Strand Bookshop and picked up a copy of Meditations. This was in the autumn of 1967, a little over a year after O’Hara died, aged 40, as a result of being hit by a dune buggy on Fire Island (where motorized vehicles were prohibited). I read the book in a Village café. I didn’t like it much.

Yes, I was something of an ass.

Then, a few years later, I came across O’Hara’s “The Day Lady Died” in an anthology and, though I remained an ass for many years, the poem changed forever my assumptions of what was possible in poetry. I realized that I did not have to pay much attention to my creative writing teacher, who was a nice guy but told me, frankly, that he didn’t know what the hell I was trying to do. I also understood that poetry could be intimate, ironic, self-deprecating, even (gasp!) vernacular.

I immediately liked the poem’s gossipy tone, its list of banal details (“It is 12:20 in New York Friday /three days after Bastille day”); all the lists, in fact, of things done, thought about, purchased; the droll aside about the poets of Ghana; its blatant matter-of-factness, glib surface and conversational flow – all of which sets the reader up for the emotional wallop of the poem’s final lines.

The casual tone changes, ironically, with the word casually, in the sixth line from the bottom, which O’Hara uses the way you might say “Casually, I stepped over the hissing python” or “Casually, I disarmed the ticking bomb.” The poet is quite literally whistling past the graveyard, because he has seen (and bought) “a NEW YORK POST with her face on it.” It’s the first indication in the poem of any feeling deeper than “quandariness.”

But whose face is it? Well, yeah. One marvelous aspect of the poem is that the woman it elegizes is never mentioned by name. Other women are: a bank clerk – “Miss Stillwagon (first name Linda I once heard)” – and Patsy, a friend of O’Hara’s (in fact, Patsy Southgate, his hostess that evening). But there is no mention of “Billie” or “Holiday” or “Billie Holiday” or even the nickname by which she was known to friends, lovers and fans, “Lady Day.” That name is contained in the title, but reversed. Why?

I think O’Hara meant it as a kind of test. I think the poem is aimed at a very particular target audience: those who could immediately identify its subject from the word play of the title. Because O’Hara no doubt figured that people who had never heard of Billie Holiday, had never heard her sing, would just not get it, would be unable to understand what he felt when he learned of her death, effectively from cirrhosis of the liver, at the age of 44.

In his book on O’Hara, the writer Brad Gooch quotes a close friend of the poet, fellow New York Poet Kenneth Koch, as saying that O’Hara wrote the poem that very day, July 17, 1959, during lunch (“a hamburger and a malted”), and then read it that evening, at the Easthampton home of Mike Goldberg and Patsy Southgate. They’d been discussing Holiday’s death, and listening to her music, when O’Hara, silent until then, pulled the poem out of a pocket and read it.

The last four lines are all the more devastating because of their contrast to the apparent banality that precedes them. The poet now begins to sweat, and the reason may be the muggy weather, or it may be that he is remembering the last time he saw Lady Day alive, at the 5 Spot, a popular jazz club on 5th Street and Third Avenue. It was not long before her death; drugs, tobacco and alcohol had reduced her voice to a mere whisper.

The poem’s slick conversational narration is now slowed by gerunds (“sweating,” “thinking,” “leaning”), which have replaced the active verbs in the preceding lines. And the penultimate line – “while she whispered a song along the keyboard” – uses formal poetic devices: meter, assonance and alliteration, absent in the rest of the poem. We are no longer in everyday time but in memory time, and we have arrived at the heart of the matter.

The final line – “to Mal Waldron and everyone and I stopped breathing” – is devastating, particularly the last three words. After 19 ands, which helped create the slick flow and glib tone of the poem, the three stressed syllables in the final three words (I stopped breathing) force the reader almost literally to stop breathing himself, and stop breathing here connotes both the poet’s awe (from hearing her sing) and, of course, death itself. The air quite literally has gone out of the poem, and we all die a little.

Writing this piece helped me remember one of my first published poems, in a magazine I’d put out with friends at university. The poem was called “After a Lynching” and it used images from “Strange Fruit” – and an epigraph from, of all people, Hannah Arendt.

As I said, I was something of an ass.

SIEGFRIED MORTKOWITZ works as a free-lance journalist and lives in Prague. His work has appeared in Brown’s Window, After Hours and a nameless (and now defunct) German magazine in the form of a box (which contained the loose pages). After Hours Press has just published his first chapbook, Eating Brains and Other Poems. He is the culture editor at The Prague Post.

Read a poem by Siegfried Mortkowitz in B O D Y