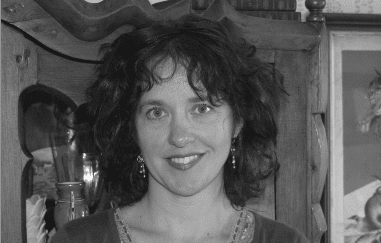 Halfway. A dark
closet opened. Cables
that should have been buried, lying, instead, on the lawn.

And then a muttering crowd. I recognized each one:
A sneer. A cry. That same
student, eternally
yawning and rolling her eyes. And

one guy I barely knew, and knew too well: His

awful smile
and wink.
Apparently
he’d never died.
Nor had I.
Just my high heels stuck in mud.
And these days you can find

anyone with Google. He’s
a lawyer in Houston now. I’ve

seen his profile, and

an extraordinary x-ray of my chest
held up to a dirty window:
That kind of light, if

you can call that light. Every

manner of cliché: The whole
reason for cliché. To say
I was twenty-one and in New York: Sparkling

clutch purse full of change, and
a mirror full of me. Could

I have been so stupid? You

think these things only happen
to people who are not you? Don’t

touch me, don’t touch me, the princess muttered
as they touched her.

Afterward, so many years
had passed between
me, and me. I thought, forgotten. Until, slowly, she
appeared

in a housedress, still on her knees, her
face still gray, still
the young mother who stuck her head in an oven. Nearly

twenty years younger than I am today. I thought
what could such a shade have to say? She said:

What difference does it make?

Her blinding mind.
I stepped toward it.
To unwind it.
She rolled her eyes.
She said, So
you followed me this far, Laura. Good
for you. You’ve
come to the right
place to die.

stood where feet would be but blood had pooled instead.

Whose blood, I asked. She smiled. She said, Whose
shoes?

I froze.
How did she know?
She said, Your

little friend is here. I said, No, no, that was so
long ago. I told
her that I had a husband now, a son. I said
it’s not that I forgot, but I—

And then I saw
myself
as a snapshot of a statue of a woman saying
certain things forever. But

you, she said, and I
knew where it was that we were going next.
Darkest hour of the night
could just as easily be
in hell or paradise, like

the alchemist’s black and bleeding fingers in a basin, or
his rubber gloves, and
an infant, a ribbon, a toy I used to play with
bearing and baring a dead child’s face.
Sheesh, I said, awake. What

food or drink or drug
this time did I take? But

it had followed me

out of the dream: Twisted

fellow on a cross in a cathedral on Amsterdam.
Or that diner on Broadway with
the steamy windows where
he and I divvied it up with our friend.

LAURA KASISCHKE was born in Grand Rapids, Michigan and teaches in the MFA program at the University of Michigan. Her books of poetry include Wild Brides (1992), Fire and Flower (1998), Dance and Disappear (2002), Gardening in the Dark (2004), Lilies Without (2007), and Space, in Chains (2011), which won the National Book Critics Circle Award. Kasischke has won numerous awards for her poetry, including the Juniper Prize, the Beatrice Hawley Award, the Alice Fay DiCastagnola Award, the Bobst Award for Emerging Writers, and the Rilke Poetry Prize from the University of North Texas. She has also won several Pushcart Prizes, as well as received fellowships from the National Endowment for the Arts and the Guggenheim Foundation. Her novels include Suspicious River (1996), White Bird in a Blizzard (1999), The Life Before her Eyes (2002), which was made into a movie starring Uma Thurman, In a Perfect World (2009), and The Raising (2011).

Poem: “Bike Ride with Older Boys”
Poems and articles at The Poetry Foundation
Interview at The Smoking Poet