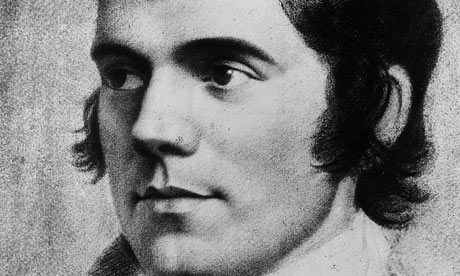 Winter, Scotland, 1982, a small boy stands in front of a group of children and adults. It is silent in the way that groups of assembled children are silent: A yawning tension, shuffling, a cough. The adults, primary school teachers, nod along to each word the boy says. When he is finished there is no laughter, only some low and dispirited applause.

The date was 25th January and the small boy was me, or another wretch like me, born and raised in Scotland, forced to commit to memory and recite a poem by Robert Burns in front of his peers. I have no idea if Scottish schoolchildren are still strong-armed into sitting down with their mothers at the kitchen table and getting the good RB word by heart, but the experience never left me.

Unfortunately, the poem did: “John Barleycorn”, all eight stanzas, sixty lines of it, gone like mad freckles and superior lung capacity.

Robert Burns is the inventor of the Burns Stanza and the national poet of Scotland. As an adult, I have grown to love his tumbling, turning poems, and he is also much loved internationally, notably in Russia (the first country to commemorate Burns with a national stamp, in 1956). Each year on his birthday, the 25th of January, the Scottish nation gets its fill of The Bard. Rabbie Burns’ suppers are held all over the country, chiefly peopled by ruddy-faced folk in kilts, some old ladies, one nice-looking and flirtatious old lady, and some of your dad’s mates.

The centrepiece of the evening, having been chased down, killed, cleaned and dressed, is the haggis. This classic Scottish delicacy is banned in the USA eaten traditionally at Burns’ suppers and is ritualistically served at the climax of the evening. It goes like this:

The haggis enters on a dish carried from the kitchen by the chef. A man is playing bagpipes as the cheiftan ‘o the pudding-race approaches the head of the table where the Master of Ceremonies is standing, blade in hand. He will recite Burns’ “Address to a Haggis” before slashing the beast wide open. He will then be handed a dram of good Scotch whisky.

The haggis is shared out amongst the guests, and grace is said before eating, usually “Selkirk Grace”:

The night ends with everybody singing the world-famous Auld Lang Syne (also popular at Hogmanay).

Robert Burns is a poet known for his earthiness. He was a man of the land and of women and this is very apparent in much of his work. Bear in mind he had twelve children whose decendants reputedly number six hundred today.

Here is William Wordsworth on Burns, and this is what Sir Walter Scott had to say:

His person was strong and robust; his manners rustic, not clownish, a sort of dignified plainness and simplicity which received part of its effect perhaps from knowledge of his extraordinary talents. His features are presented in Mr Nasmyth’s picture but to me it conveys the idea that they are diminished, as if seen in perspective. I think his countenance was more massive than it looks in any of the portraits … there was a strong expression of shrewdness in all his lineaments; the eye alone, I think, indicated the poetical character and temperament. It was large, and of a dark cast, and literally glowed when he spoke with feeling or interest. I never saw such another eye in a human head, though I have seen the most distinguished men of my time.

Robert Burns’ poems have stood the test of time because through them, he addresses the reader in such recognisably human terms. Poems like “Tae a Moose” and “For a’ That and a’ That” are as relevant today as when they were written.

To celebrate, and because it is traditional to drink a wee golden one on Burns’ Night, B O D Y offers the editors’ whisky recommendations alongside a short list of our personal favorites from Burns’ poems. Slàinte!