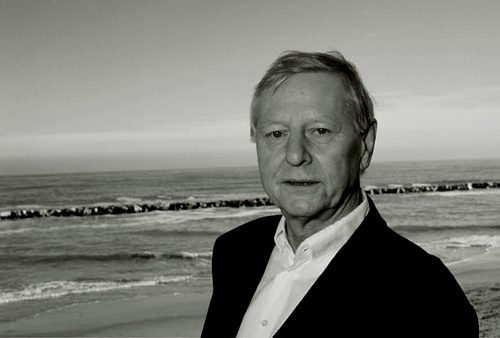 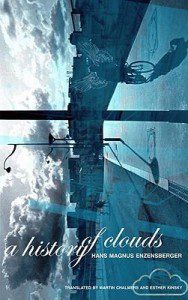 Enzensberger published his first book of poetry in 1957. His work was then known for its terse language, irony, and no-nonsense stance toward German politics. As he says in this interview, with his early work, he was engaged in a “sanitation job” in post-war Germany. He has gone on to publish some 26 books of poetry, biography, and essays, many of which have been translated to English. He has received numerous prizes, including the 1993 Erich-Maria-Remarque-Friedenspreis; the 2009 Griffin Poetry Prize Lifetime Recognition Award; and, in 2012, an honorary degree from Bard College in New York.

The interview took place on a sweltering June day, in the lobby of a hotel in Prague, where Enzensberger was staying for The Prague Writers’ Festival. He was wearing a meticulously tailored sky-blue linen suit, and a stylish straw fedora. The Gaza flotilla raid had taken place that week, and Enzensberger had just endured a morning of interviews with journalists who seemed more aware of politics than literature, or at least more interested in the writer’s political opinions than his aesthetics.

The night before, Enzensberger had given a reading at the National Theater’s Nová Scéna. He finished the reading with “A History of Clouds,” a sequence of poems that gives the title to his most recent collection of poetry. It is a measured meditation on clouds composed in Enzensberger’s characteristic style of linguistic spareness, and lyric precision, with more than a nibble of irony.

The blue sky is blue.
That says everything
about the blue sky.

These flying rebuses however—
although the answer changes all the time,
anyone can decipher them.

They are above mistakes.
No one will be quick to claim
that one of them is misshapen.
A minute-long shower
sends down millions of sleet flakes.
Every one is perfect.
No two flashes of lightning alike.
And all this without a brain!

In the middle of one of these poems, a violent thunder storm broke with a crash that shook the roof of the theater. Enzensberger paused just long enough to acknowledge the presence of the storm, and continued with his mellifluous reading. It was as if a bestial cloud had harkened to his master’s voice.

Hans Magnus Enzensberger: I hope you won’t ask me about the German Chancellor, the Gaza Strip, or Mr. Klaus.

B O D Y: One point you were insistent on in your conversation with Mr. Taher and John Wray last night is that the writer is no more moral than anyone else.

HME: Yes, that’s my opinion. Because if you look at the record of what writers have historically been up to, even just in the 20th century, it gives you a certain warning about the ethical credibility of writers, generally speaking. Of course, there are individuals who might be called, if not saints, absolutely impeccable from that point of view. But it can’t be generalized and it’s not a good idea to assume that attitude yourself.

B O D Y: The question then turns to whether we can separate an artist from his work. Talking about “bastard” writers last night, you mentioned Ezra Pound.

HME: All the usual suspects. On the other hand, you have all the fellow travellers who went to Moscow, and so forth. I don’t say writers are incapable of being moral, but the best people, when they do something useful in the moral sense, they keep their mouths shut. That’s better.

B O D Y: Pound said “Poets are the antennae of the race.” Does this contradict your ideas on morality and the writer?

HME: I remember Mandelshtam once said the main virtue or main task of the poet is attention. So you have to take note and use all your senses, and whatever intelligence you might have should be brought to bear. And that in itself is not a modest task, it takes some doing. You must have concentration, and the attention not to be deflected and so on. That’s different from someone who could be considered a cad but still has that quality of concentration. One thing doesn’t follow from the other.

B O D Y: Yes, and Paul Celan said that “Attention is the natural prayer of the soul.”

HME: You see, he agrees with Mandelshtam.

B O D Y: About writers’ morality. Is this a conclusion you’ve come to over a long life? Or have you always felt this way?

HME: Well, after World War II, I took part in what you might call “a sanitation job.” Because of what Germany was like in ’45 and ’47, we had to clean things up because it was unbearable. It was hygiene, a vital reaction because either one might succeed in the long run to make the place inhabitable again, or the alternative was to leave. The German case is extreme, but it’s not a uniquely German problem. In the Czech Republic there are also some things which need to be verified, so to speak.

B O D Y: In an interview with Michael March, you made the following comments regarding poetry: “In some respects it’s a vice, like an alcoholic who starts drinking…Poetry is a risky thing. If you take on the risk, it is wrong to complain.” Could you elaborate on that? What is “risky” about poetry? Does this have to do with the writing of poetry, or with the life of the poet?

HME: I find it hard to get away from poetry. It’s certainly not a profession, because I can’t see myself sitting at the desk at nine in the morning and writing poetry until 6. It’s not a job like other jobs because it doesn’t entirely depend on will, or you’d fall into a routine. Of course, you can learn a bag of tricks and go on and on that way, but that’s not interesting. And of course you might dry up. We know cases of very talented people who simply stopped. And maybe it’s even laudable to stop when you have nothing more to say. But until now I don’t find myself prepared to stop.

HME: Yes, this is also because I don’t admit boredom. I’m not talented for laziness. It can be admirable, like the cat on the chaise lounge, the Zen thing… But I wouldn’t like to be cast in the role of the poet who is complaining about his state in the world, about money, that he’s not been written about, not famous enough. I don’t like this kind of thing because I don’t see why someone who happens to be a poet should be more unworldly than other people. It may happen, but it’s not a necessary qualification. Also, you get away from the rest of mankind in this way, it’s a niche where you hide and I don’t like that. Because I need the contact with the… I would almost say “the fiction of reality,” so I must be in some sense involved.

Of course, publishers wouldn’t see it this way, but to me, poetry is my nucleus, the hot stuff. And then there’s a lot of periphery where things cool down, you might say. Then I do essays, write for theater, write libretto, I like to translate… so you keep yourself occupied and amused.

B O D Y: Looking back over your long career, do you see a certain arc, a progression you can track?

HME: It’s not for me to say. I don’t think much of self-description. You’ve had your say and then it’s the others’ turn. Journalists put a sticker on you, but I don’t collaborate with this effort.

B O D Y: You mentioned last night how your history and culture is a kind of baggage you inherit and which you must always carry with you. Do you feel that is especially true for German writers?

HME: If you are a Russian, there’s a load, and America also has it’s problems, like slavery and that whole thing. Also, as an American you have the present burden of being an empire, which is not altogether a favourable thing… I’d say you have to construct your own tradition. So I take it from where I can use it, whether it’s German literature or what have you. I’m not so keen on originality in the sense of the ambition, which is a modern ambition, to do something which has never been done before. As a criterion it strikes me as a little bit childish, you see. If you do something in the arts which no one has done before, it may be that it wasn’t a good idea, and that’s why no one did it.

B O D Y: A History of Clouds is quite meditative, even bearing the subtitle “99 Mediations”. Do you feel that this meditative style is something that is only possible late in life? Is this a style you must mature into?

HME: Well, my latest book is of quite a different character. It’s literary biography of a German general during the ’30s and ’40s, involving much historical research. So, you might say that’s the contrary of a meditation. But I think there are writers, who you could say are like moles. Kafka was a mole. They do one thing their whole life. Then there are storks, who are migrants finding something here and there. I’m more like a stork temperamentally. It might seem contradictory. Some people in Germany complain they don’t know how to nail me down.

B O D Y: There is a common complaint among poets that no one reads poetry. How do you feel about this?

HME: We always hear this lament. But first of all, I think lamentation isn’t healthy. No, it’s not good for you. The other thing is of course in terms of literature, poetry is a minority thing, but a society without minorities, and minority opinions, would not be viable. It’s also very difficult to do away with minorities. It has been tried several times, up to murder and genocide, but it’s not a good idea. In a harmless way this is also true of poetry. A big American publisher would say “we don’t do poetry. We don’t do books under 10,000 copies,” so also this is sort of a slight attempt at elimination, but it doesn’t work. It does not work. But that’s also a narrow conception of poetry. Ask any kid out there, and he knows by heart 200 pop songs. Those aren’t prose. And a prayer, like “Ave Maria;” that’s a poem. So this is a parochial view of poetry. Even very small children in kindergarten have their verses. Poetry is an anthropological thing. Like counting. We’re programmed this way.