Deaths of the Artists: Anton Webern in Twelve Tones 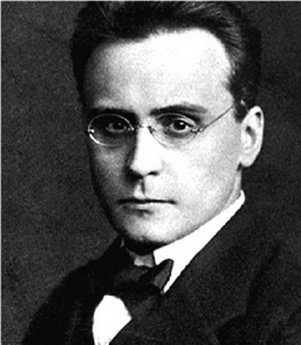 Anton Webern was killed on September 15, 1945 in Mittersill, Austria. For a long time no one knew the exact circumstances of the great composer’s death and the musical world more or less accepted the mystery. Then, musicologist Hans Moldenhauer carried out an investigation that took in the US Army’s own account of events.

Webern was going outside to smoke a cigar while a sting operation was being carried out to arrest his son-in-law Benno Mattel, a former SS-member and black market operative. Raymond Norwood Bell, company cook from North Carolina, was one of the soldiers participating in the action. Hearing some noises outside the room they were holding Mattel in, Bell went to investigate and apparently bumped into the composer and fired three shots. Bell later stated that he had been attacked. Ten years after the incident Bell died of acute alcoholism attributed to the guilt he felt over what had happened.

The 1970s are over now, but when they weren’t and you were in the middle of listening to the nineteenth minute of an interminable guitar solo from one of any number of interchangeable progressive rock bands you could be forgiven for fearing the decade might stretch on longer than its allotted ten years. But then came The Ramones, punk rock and the mercy of the one-minute and thirty-six second song puncturing the pretensions of the rock opera composers.

This was the very fight Webern took up with a minimalist, twelve-tone fury.

Perhaps it is a fundamental opposition that appears and reappears throughout human history. On one side of the barricades are the musicians who strive for the loud and grandiose, base their work on ancient mythology, or at least what they consider its Germanic or Tolkienesque fantasy essence. They develop a mass following, what can even be called a cult, and their success emboldens them, enriches them, allows them to live in the kind of castles that decorate their operas or album covers.

At the other extreme stand the musical purists and punks. Gone is all the excess fluff. Punk rock stripped music back down to guitar, bass and drums. Webern too wrote primarily for small ensembles. Yet it is the length of his songs that is particularly notable. At a time when writing extended symphonic works was viewed as the pinnacle of the art form Webern only once wrote a work over 10 minutes long and composed pieces whose brevity was considered by some as pure provocation.

Webern wasn’t a punk though. As inflammatory and proto-punk as the Surrealists could be in Paris, their even more artistically radical contemporaries of the Second Viennese School were deeply and openly connected to musical tradition.

There were other differences as well. While it wasn’t uncommon to see a rock star like Pete Townshend show up at a Clash concert to try to give (and implicitly, receive) a stamp of approval to music’s new blood this never happened to the Viennese composers, above all to Webern, who went through life with the respect and admiration of a small circle of colleagues, students and admirers.

Bell’s wife stated that whenever her late husband got drunk he regretted Webern’s death. Considering he died of alcoholism this must have been often, and if he drank in company must have made him hard to take at times.

“Ray was a good sort and we all knew what he had gone through, but it got to the point where all he wanted to talk about was Webern. It was too much, as if the Second Viennese School consisted of him alone and there had never been a Schoenberg or a Berg, not to mention composers like Stravinsky or Bartok, the poor guy,” a former drinking buddy of Bell’s might conceivably have said.

Romanian-Jewish musicologist and composer Filipp Herschkowitz had been a student of Webern’s in Vienna and sought refuge from the Nazis in the east. He ended up bringing Webern’s music to a state of even greater incomprehension and indifference in his exile in The Soviet Union, a trying obscurity that would last until his death in 1989. Composer Dmitri Smirnov studied with Herschkowitz and recounts the fate of a lone modernist looking to uphold the tradition of his teacher in a land of social realism.

“As time passed, the Second Viennese School went out of fashion, without ever having come into fashion in the first place, and Herschkowitz was deserted by everyone: an eccentric that no one needed, who spoke in amusing paradoxes or dull truths.”

What Herschkowitz appears to emphasize is Webern’s (and Schoenberg’s and Beethoven’s) relationship with tradition: “The great masters make up a strictly organic chain. They are always ‘innovators’ and never ‘avant-garde.’ Innovation is the only possibility of remaining on the rails of tradition.”

This is the inverse of Herschkowitz’s contention that Webern’s many postwar imitators such as Karlheinz Stockhausen and Pierre Boulez became entirely focused on appearing new and novel so as to distinguish themselves from their fellow composers and advance their careers.

The documentary evidence surrounding Webern’s death reveals an uncomfortable, non-tragic side of what happened, though this seems clearly unintentional. In a letter to his daughter that Moldenhauer reproduces the composer asks her, “And how do you get through these horrors?” It is 1945 and you would think he might be referring to genocide or something similarly evil, but no. He has just lamented the loss of some belongings from a hideaway under their garden house in their abandoned Vienna home – “just think! !-all our ‘silver’! ! !” – he writes.

I wonder if in the decade between Webern’s and Raymond Bell’s death the latter ever thought of attending a concert of the Austrian composer’s music. He was reportedly wracked by guilt and may very well have wanted some point of contact with the soul of the man he killed. Some people would have turned to spiritualism and séances, but a composer actually provides an opportunity for anyone, his killer included, to commune with his spirit for an extended period of time (though in Webern’s case this period of time could turn out to be quite short).

Anton Webern was born December 3, 1883. Franz Kafka was born July 3, 1883. Here are two classmates from the Central European school of stripped-down expression, of creating art works on a diametrically opposite scale of a Wagner or Victor Hugo, and of being highly unsuited to the everyday world.
Arnold Schoenberg famously referred to one of Webern’s masterpieces of concision, Six Bagatelles for string quartet, Op. 9, as “a whole novel in a single sigh.”

Aside from what I imagine to be the scarcity of Webern performances in the North Carolina area, I imagine the likelihood of Bell going to one to be very low. He was described as an overly nervous person to start with, so it’s hard to imagine him at a concert of Webern’s music at all. For one thing the music is not what you would call soothing. Yes, you can reach a kind of meditative calm as you listen to it, no question, though even then it retains an edge. But some people just are not predisposed to put their nerves at the disposal of this particular master of modern art, and Bell seemed to fit this category of people.

Not everyone accepts Moldenhauer’s account of Webern’s shooting as fact. One thing that grates has been the sense of American callousness, as if a shoot em’ up mentality invaded peaceful Austria and deprived the victimized country of one of its cultural treasures. Webern’s own Nazi sympathies, which co-existed with his continued admiration and friendship with his exiled teacher Schoenberg and many other Jews, is a possible key to an alternative explanation of what happened that night.

While it has always been assumed that Bell was lying or exaggerating when he said that the frail sixty-two year old composer attacked him it has been suggested that he did so to provoke precisely what came about – his death. That following the collapse of the regime he supported, the death of his son in combat and, perhaps most daunting of all, the idea that he would be confronted by returning colleagues and friends as the true extent of Nazi brutality began to become clear, the possibility exists that he found himself no longer able to face the idea of going on living.

Raymond Bell holds a singular and terrible place in the history of 20th century art. We know all about the destruction Stalin and his secret police henchmen wrought on Russian and Eastern European culture but we don’t know who actually put the bullet into Isaak Babel’s head and whether he later drank himself to death out of guilt or just drank himself to death in the normal course of things. The same goes for the Nazi who turned on the gas that killed Czech composer Viktor Ullmann or the Spanish fascists that were the probable murderers of Federico García Lorca. They escaped identification, and very possibly could have escaped guilt as well.

Long an opponent of the Vienna School, Igor Stravinsky, upon hearing of Webern’s death, said the musical world should mourn his passing and summed up both the nature and extent of his accomplishments as well as the insurmountable obstacles he faced: “Doomed to a total failure in a deaf world of ignorance and indifference he inexorably kept on cutting out his diamonds, his dazzling diamonds, the mines of which he had such a perfect knowledge.”

MICHAEL STEIN is a writer and journalist in the Czech Republic. He writes a Central European litblog called literalab for Prague-based Czech Position magazine and his published articles on art, film, music, theater and other cultural events are collected on the blog Prague at Midnight. His short stories have appeared in a number of literary journals, including Drunken Boat, McSweeney’s, Pindeldyboz and Café Irreal. He is from Philadelphia.

Deaths of the Artists is a version of Vasari’s Lives of the Artists for the renaissance of modernist art that took place in the early part of the 20th century and which was brought to an end by a wave of oppression, murder, exile and despair that Vasari could never have conceived of.