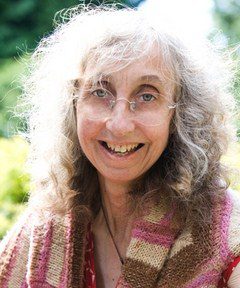 He bought them for their anniversary.
How could he? It was near her birthday, May.
Chrysanthemums breathe frost and foggy days.
But there they were, a huge bunch. You could see

his smile, his careful fist. They were the dull
tawny of amber, sea-worn, which would last
beyond the boom of war, the splintered mast.
And last they did, for weeks, as she trudged back to school,

to jobs she hated. Oh their years were ice,
slow-melted. They have thawed. We may have snow.
So I have bought chrysanthemums’ gilt glow,
their yellow heads, their bruised hearts, their cold spice.

‘Mark E.Benson, Chimney Sweep’.
His van is white. I smell the smoke,
hot, raw soot catches at the throat.
The day the fire choked,
my parents carried glowing soot
in dustbins, safe outside,
quick, calm as veterans. But

the war was constant. Six a.m.
brought sweeping, ash and coughs.
Then sulky paper, pale split wood
before the flames took off.
Ranges had ovens, used. I saw
rice pudding bubble gold. I burnt
neat blisters on the black-knobbed door.

I miss those fires. I miss the time
the coal sank to a pure red cave,
flickering, falling. Knees half-burnt,
my back was Arctic. Yes, I have
scanned gas fires, iris, hyacinth, skies,
glimpsed in the long bars’ steady hiss,
the faithless blue which lit your eyes.

Life of extremes, life for the brave,
season of cold and lovely heat,
cinders on paths, soot for the rose,
warmth for the lover’s’ hand, child’s feet.
Would I keep coal fires once more? No?
Spring’s dust, blue eyes in dust-streaked face –
Sweep! Sweep! I let the white van go.

ALISON BRACKENBURY’s eighth collection, Then, is due from Carcanet in April 2013. New poems can be read at her website.
She also sends a new poem every two months to members of her Facebook Group.