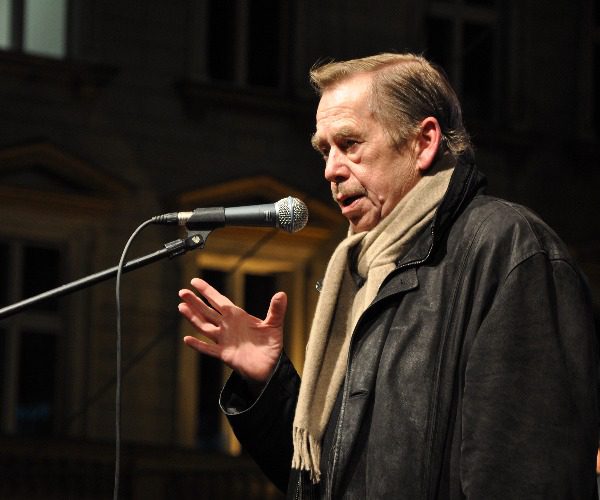 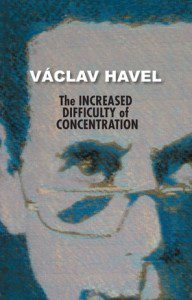 It may still be too early to specify the precise meaning of the adjective “Havelesque,” as in “this is a Havelesque drama” (or would that be “an Havelesque?”), the way we have metamorphosized Dr. Franz Kafka’s surname to stand for just about any situation that defies daylit-logic, in fiction or otherwise. If there is any chance that Václav Havel’s work will make such an impression on the English-language literary world, however, it will be, at least in part, through Theater 61 Press’s The Havel Collection, a series of new translations of five of Havel’s plays, spanning five decades, from Ela, Hela, and the Hitch, written in 1961 but not published until 2009, to Leaving, published in 2007 (and made into a film in 2011).

If, after all his laurels, Havel also gets an adjective, it will certainly not be based on his public persona, whose most famous pronouncement was “Love and truth conquer lies and hatred.” Havel the playwright is much more understated. He is subtle, ironic, deprecating, and not above a little good old-fashioned strangeness. This is drama for the head and the gut; for thought and for laughter. Havel’s plays are comedic tragedies with a touch of polyester vaudeville. And throughout these five entertaining volumes, which in all contain nine plays, a style abides.

One element of this style is what Havel liked to call his “hub-bub.” Almost all of his plays here contain a scene in which the drama grows from a dialogue to a cacophony, often centered around one character, who is nearly forced to bend under the pressure. It’s a kind of vocal bureaucracy, in which every character has a say in the protagonist’s fate, but him.

The publication of these translations stems from a festival of Havel’s plays that took place in New York City in 2006, attesting to the fact that Havel’s work resonates with foreign audiences. Yet Havel’s humor and viewpoint are particularly, and, at times, peculiarly, Czech. The depiction of certain characters, most notably Shelley in The Memo (the names have been Americanized in this translation), will be particularly humorous to anyone who has spent time in the Czech Republic. She is a secretary who, when she’s not preening, spends the play coming and going from the office for buns, milk, and the like. It’s a brand of communist indolence that lingers in state offices even today. Havel’s characters are admirable, then, not just because they are funny, but because they are true.

Havel’s plays are not dramatically complex. For the most part these plays are composed of dialogues between two characters. This is most significantly the case in The Vaněk Plays. The Memo and Leaving are more complex, involving more characters, but even those both take place in one location. Just as Havel’s book Letters to Olga was ostensibly a collection of letters Havel sent his wife from prison, but were actually opportunities for Havel to demonstrate his philosophical and sociological ideas in writing, his plays are vehicles for his ideas about life, art, and politics. As all plays are, to some extent.

But the fact that Havel was a “dissident” writer under communisim in some ways limited his range, and in some ways sharpened his sensibility, allowing him to pierce to the core of the trauma of attempting to live as an individual within a collective system. Here again Kafka’s name begs to be uttered: The bureaucracy of the Austro-Hungarian Empire in part inspired Kafka’s brilliant, disturbing fictional universe, as the bureaucracy of communism in part inspired Havel’s. Havel’s writing is more referential, however, more based in the world, and not nearly as uncanny as Kafka’s, even for readers who never experienced communism. One thing is certain: These plays will grow in importance with the years. The Vaněk Plays are a dramatic time capsule: Plays that seem to absolutely capture the tenor of dissident intellectual life under communism, while being relevant on a human sociological level regardless of ideology.

These three one-act plays involve Ferdinand Vaněk, a dissident playwright who, in the first play, Audience, has just been released from prison and relegated to a manual labor job in a brewery. His audience with the unnamed Brewmaster comprises the entire play. The second play in the series, Protest, involves a meeting between Vaněk and Staněk, an aged screenwriter who has betrayed his ideals, in the latter’s cottage. The third play, Unveiling, takes place in the apartment of a recently married couple who invite Vaněk over to show him their redecorating job. All three plays involve some kind of appeal from individuals who have complied with the communist system and reaped their rewards — employment, financial security, a place to live, to Vaněk, who has not taken advantage of the system, and, by insisting on living in protest against it, has been crushed, or at least maimed, beneath its wheels.

Vaněk is Havel, of course, and the events of these plays mirror those of his life, from the brewery to the anti-communist intellectual rabble-rouser to the childless middle-aged man. But through these three plays, written between 1975 and 1978, we can see the evolution of Havel’s life under communism, as well as the lives of some of his peers. Taken as a whole, The Vaněk Plays capture an era, at least ostensibly so, for a foreign reader, while achieving relevance beyond the specific political and social situation which begot them. Surely this is a literary accomplishment.

Other, later plays, like Leaving, which depicts a leading politician, Rieger, who is forced to vacate his state-sponsored villa after his political term comes to an end, are less successful, verging more deeply into the absurd, but perhaps that is only because Havel’s life did so. Imagine moving from a jail cell to Prague Castle! With the exception of Dozens of Cousins, a short sketch of a sequel to Unveiling, and the collaboration The Pig, or Václav Havel’s Hunt for a Pig,  Leaving was the only play Havel wrote after retiring from politics. In many ways it is a classic Havel play: The humor, the hub-bub, the central chracter being gradually stripped of dignity — yet as a whole the play is less-than-successful. Did Havel sacrifice his powers as a playwright in his life as a President? That is an intrigue for other pages. The play is, in any case, humorous and entertaining, and, for anyone with a knowledge of, or interest in, Havel’s post-political story, sharply insightful.

It must be stated that the translators of these plays are well-known and respected, especially Paul Wilson, who translated Leaving, and The Memo, and is Havel’s most prolific translator. Jan Novák, who has translated The Vaněk Plays, is a prize-winning writer and translator in both English and Czech. More than one typographical error mars their fine translations, but that is a quibble, and will surely be corrected in future editions.

Historically, dramatically, and socially insightful, the plays contained in The Havel Collection are welcome additions to the English-language dramatic canon. Now that Havel the playwright has put down his pen, these plays are among the best we will have from him. What a joy to know they shall live on, internationally.