Jessica Mensch: Painting at the Intersection of Video Art and Performance Art 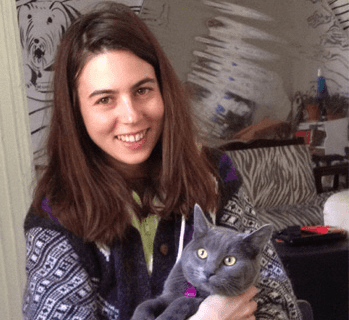 As B O D Y’s Art Editor, Jessica Mensch is known for her penetrating interviews with other artists. We decided to turn the tables and ask her about her own work this time. A Montreal-based painter, multimedia artist, her third solo painting exhibition,THE FUZZ, recently opened at Montreal’s Visual Voice Art Gallery. Our interviewer, Tammer El-Sheikh, caught up with Jessica to ask about her process, how she approaches art – and find out what THE FUZZ is all about.

TAMMER: Have you ever thought about destroying a painting?

JESSICA MENSCH: Yes, but there was just one that I damaged with the intention of completely erasing.

TAMMER: How would you destroy a painting or how have you?

JESSICA MENSCH: Well, it’s embarrassing for me to describe. I kicked it in. Later I thought I’d try repainting it, but made a mess of it. Ultimately I snuck it off the wall of my parents home, un-stretched it, folded it up and buried it at the bottom of their trashcan.

TAMMER: Awesome. Sounds like quite a ritual. What did the painting do to deserve all that?

JESSICA MENSCH: Good question. It was a self-portrait, and the first fully realized work of figurative painting I had done. I began my career making abstract art. I was interested in the work of Colour Field painters like Morris Louis, Anne Frankenthaler and Mark Rothko. Coming from this practice, it was my habit to begin a painting by first working out its atmosphere and color scheme. I think the portrait was a loss for me because it failed to fulfill this structure. I remember feeling out of control while making it. In retrospect, it was probably a really good painting, and I just couldn’t see it . . . a good painting for those very reasons perhaps.

TAMMER: It was a good painting because it escaped your intentions and control?

JESSICA MENSCH: Maybe. Sometimes when you’re pinning down an octopus, you just get lucky. Also, I think the project was interesting – making a work of figurative art with a structure made for abstraction.

TAMMER: Why did abstract painting stop working for you, or has it?

JESSICA MENSCH: I still make abstract work, but that’s a relatively recent occurrence. Years ago I stopped because I got bored. Bored of the forms I was coming up with, my choice of colours, and I didn’t have anything to conjure. I felt unexcited by the project – or at least the way I was defining it for myself … And form was never an escape for me.

TAMMER: Would you say that in the transition from abstract art to your more representational work you traded in a standard of expression for one of description? From something more personal to something more objective?

JESSICA MENSCH: I’m not sure that I would describe my current work as objective. However it does lend itself to description more than my abstract work. What do you mean by objective?

TAMMER: I guess objectivity is something people attempt – there’s always something a little personal about it. Where do the objects in your paintings come from – loincloth, a coffin with a fertility icon painted on it, an albino slug? Even the humans in your last paintings are a little like caricatures or types – like objects. The wild child in the loincloth and a skinny Santa. Are these subjects kind of objectified?

JESSICA MENSCH: Yeah. I wanted the characters to be types … almost. For the wild child, I think her impassive expression and calculated movements undermine the potential to totally typecast her as a free spirited hippie. Santa is a wiry, creepy, cigarette smoking woman who has a mysterious connection with the Space Mummy . . . and the Albino Slug, well, I simply thought it was hilarious to specify him as an ‘albino’. In folklore albinos often have mystical powers. Given this, I would say that I’m subjectively subtracting from these types to create something else. Knowing that the work was going to be representational on some level – I was after all working with a narrative – I theorized that the various conceptual decisions I was making would be revealed in the finished work.

TAMMER: There’s a great moment in THE FUZZ when Martin Cesar (the Space Mummy) catches his wig on part of the paper set you made, and breaks out of character with a laugh. I’m glad this wasn’t relegated to an outtake reel. I was wondering why Santa became so menacing in your imagination. (Although she softens quite a bit at the end of THE FUZZ when she gets to make out with the Space Mummy) Is there a moral order that you’re playing with or sending up in the work? Santa becomes evil; the whole drama is set in Hades. You said you might have called the show “only in Hades”. Are there opportunities in Hades that you don’t find on earth?

JESSICA MENSCH: I chose Hades partly because of its common misassociation with the Christian Hell, and also because of something I read in my Dad’s book, Selfhood and Ethics, in which he deciphers Plato’s meaning of the word Hades to be ‘invisible looks’. This phrase reminded me of one of the final scenes in Jean Cocteau`s Orpheus (1950), where Orpheus is leading Eurydice along dangerous cliffs through Hades back to earth. He is warned that if he looks back at her, she’ll die. The tension of this scene is high as Orpheus, knowing he is unable to help Eurydice if she stumbles, is left to his imagination. For this moment, being bodiless (i.e. dead) seems the only resolution to this tension. Considering again the phrase ‘ invisible looks’ I pictured the inhabitants of Hades revelling in a swirl of synthesized thoughts and images – i.e. ‘looks’, all projected from their bodiless/invisible standpoints. As you can imagine, discovering this setting opened up a multitude of narrative possibilities.

In answer to your question regarding a moral order, I’d say no, there is none that I’m proposing. What interests me more is how symbols, motifs and familiar visual elements, when taken out of context, can create new meaning or a change of perspective. In a sense, this concept is what ties my paintings to the video. The video is engaging in this visual play (as described above), as are the paintings. For the latter, I took video stills that are inherently time-based and fitted them to a form, i.e. painting, that is not time-based (In a painting, everything is there for you to see all at once.)

TAMMER: The paintings are definitely very open to interpretation. You kind of put Gauguin’s tropical paradise in a hallucinated version of Hades for me. Have people gotten the paintings completely wrong?

JESSICA MENSCH: Unfortunately I wouldn’t know. At the opening I was constantly referring people to the video for an explanation – I’m not sure if this was in fact a help.

TAMMER: Did anyone ask you to explain the video?

JESSICA MENSCH: Yes, and I simply retold the narrative. I wasn’t prepared to get into a deep discussion at the time. That video feels emotionally and visually schizophrenic to me. I`m someone who attempts to streamline their life into a story that makes sense (admittedly this impulse feels tyrannical at times). With this video I decidedly let go of that behaviour, and considered all images and story lines that came to me.

TAMMER: Can you identify influences from these two traditions (painting/video and film) in the latest work?

JESSICA MENSCH: I was influenced by the German Expressionist film The Cabinet of Dr. Caligari, 1970’s American exploitation films and Jon Waters’ movies. The film Dead Ringers by Cronenberg was also something I thought about when making this body of work. The gruesome manner in which he explores the psychological implications of separation, attachment, intimacy, violence and patriarchy, is compelling. Also, it’s a film that’s really over the top, taking it into the realm of fantasy fiction, but despite this it has moments that I can relate to. When working on the paintings, I was influenced by the contemporary Canadian painter, Melanie Authier. She makes abstract paintings that have incredible spatial detail and depth. They’re like abstracted versions of Baroque frescos that you’d find on the ceiling of a basilica.

TAMMER: Got it. OK, last question. If THE FUZZ were an ethnographic field, which of the following three types of anthropologist would get the best interviews from your subjects (if the slug could talk): the anthropologist of the gift, the taboo, or the fetish?

JESSICA MENSCH: I don’t know. However, that video is fetishistic for me. It’s mystical, semi religious, dirty and b-movie quality. I also made it to be a comedy, although I wouldn’t say comedy is a fetish of mine.

TAMMER: There ought to be anthropologists of the dirt.

JESSICA MENSCH: Totally. They can study B movies and grubs.

TAMMER EL-SHEIKH is a PhD Candidate in Art History at McGill University.