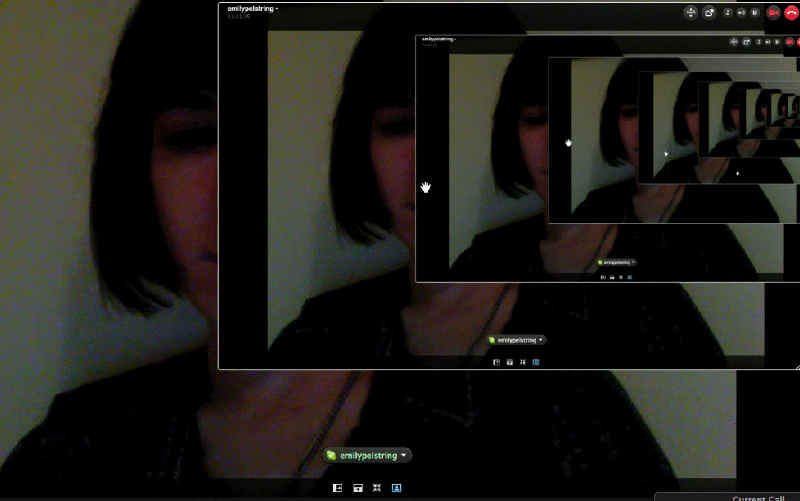 EMILY PELSTRING is an artist and animator whose artistic/research interests revolve around the historical role of emergent imaging technologies and their implication in the politics of representation. Video functions as a device for exploring the construction of identities in her work; and her work ends up sublimating or exploding notions of identity, representation, and narrative cohesion. These explosions are fueled by a post-modern, punk ethos and are often a result of an intensely collaborative, experimental process. B O D Y‘s art editor Jessica Mensch caught up with Emily in Montreal to talk about some of her new work.

B O D Y: What’s behind your decision to work with both new and old film and video equipment?

Emily: The decision is just based on the fact that both are available to me as creative tools. Sometimes I’ll use vintage technology because I like the textures or processes it allows.  Most often, I’ll shoot on 16mm film or an analog video camera, but then process the footage and edit in a digital environment.

Emily: Originally I wanted to do a cut-out animation in the style of Harry Smith but that was before I even heard the song. When Megan Remy (of U.S. Girls) sent me the song, it was so clearly glam rock and would not have fit my idea. Plus, she had very clear ideas about what she wanted. She sent me Gary Glitter and T Rex videos, so I tried to approximate the look of those old TV broadcasts.  And then I squeezed in a few graphic effects, which I shot on the same camera using cut outs on a light table.

B O D Y: I saw that you did a residency at the Experimental TV Center in NY.  What was that like?

Emily: They had amazing tools there and they gave you 5 days to work with the system during their residency program, which no longer exists.  It was a very improvisational way to create video effects because it happens real-time. You can just generate hours of footage and sort it out later.  I came in with a bunch of animation that I had been shooting for the months prior, and processed it all a zillion times.

B O D Y: What sort of equipment were you working with?

Emily: Mostly the Paik-Abe Raster Scan Device (aka The Wobulator) and a colorizer/mixer.

B O D Y: I read that the footage from your time at The Experimental TV Center was what you used to  make your Skeleton Dance video.

Emily: Yeah, then I used some of it for The Slow Drip performance that you and I did together.

B O D Y: You mentioned that the Center stopped offering residencies. Do you know why?

Emily: They were in this amazing old loft space in this small town in upstate New York, and the NEA took away their funding for not being wheelchair accessible. Weird. They had existed since the 70s. However, the people that ran it had been doing it forever and I think they felt like they had fulfilled their mission.

B O D Y: I know you like the film Daisies (a 1966 Czech film directed by Věra Chytilová), and your graduate thesis project was a video installation based on the film.  Can you describe the influence that film had on your work?

Emily: Well, that film spoke to me on a lot of levels. I saw it my first year of film school when I was 19. I felt that it somehow captured the essence of my perspective at the time.  It’s rare for a young woman to have that experience with a “classic” film, for obvious reasons, so it stuck.  I was living with Rebecca Adams, (a sculptor and sound artist now based in Washington DC).  We were best friends and sort of playing out a surreal narrative of our own in our living space, in a way that reminded me a bit of what’s going on in Daisies.

B O D Y: Was it the film’s quality and style or more the message that struck you?

Emily: The style and message are inextricable in that one.  If it weren’t edited and staged with such shockingly awesome style, there is no way it would have communicated its “message”, which is pretty complex I think.  Every time I watch it, even 10 years later, I think it has a new layer of meaning.

B O D Y: Right.  Most of your recent works are music videos.  Is that something you always wanted to do?

Emily: Yes, for sure, in the back of my mind.  When I was a sullen pre-teen in the Ohio suburbs, I was having a miserable time figuring out how to entertain myself and used to hang out in the basement and watch MTV.  Luckily by age 13 or 14, I discovered dance and art, and became a real person.

Emily: I have a strong memory of seeing Daft Punk’s video for “Around the World”, directed by Michel Gondry, when I was 12.

B O D Y: Yeah, that’s an amazing video.  So, when you weren’t in front of the TV, would you just be listening to songs and picturing things?

Emily: Oh “listening to songs and picturing things” is something I did as a wee child, even with classical music.

B O D Y: I haven’t seen any classical music videos . . do they even exist?

Emily: Ummm…. I think the tendency to pair movement and music is pretty old, if you consider ballet, opera, and the theatrical traditions of various cultures.  I’ve always felt that studying ballet had some effect on my desire to study film.  Actually, my undergraduate thesis was a dance film called There Was No Air.

Emily: Not likely- it only exists as a 16mm print.  But there is a trailer on IMDB.

B O D Y: So, incorporating dance into your videos has been a long term interest of yours.

Emily: Yes.  I would really like to work with dancers for a music video again at some point soon.  I did work with a single dancer for the Pink Noise video, Wild Love.

B O D Y: What inspired you for that video?

Emily: The dance sequence in Fritz Lang’s Metropolis.  But mine ended up looking nothing like it.

B O D Y: OK, so you’re also in multimedia performance band with me called Inflatable Deities, and we have a dance performance scheduled for the 27th:  Astral Drain.  That piece is nothing I would normally conceive of or do alone.

Emily: Me neither. That’s the beauty of that mysterious space where our minds meet.

B O D Y: Can you describe the piece help our readers know what we’re talking about?

Emily: Astral Drain is a dance by twin aliens from planet sequinz, performed inside of a 15 sq. foot inflated plastic cube which deflates on them over the course of the dance.  The choreography is sharp and articulated, a mix of Bob Fosse, karate, and just regular dancing-in-the-club type movements—but all very synchronized and militant. The music is by Nadia Moss and Lisa Gamble (Gambletron), and a light organ provides corresponding effects.   It’s doomy, menacing, funny, and friendly.

Emily: Sure, but without that tension, you have no art.

B O D Y: Would you combine any two emotions if it created tension?

Emily: No, this is not something I consciously think about, it’s just how I analyze things after the fact.

Emily: Yeah, it is a free space for exploration without rules.  What we do together can take any form and draws on every skill that either of us can contribute, which altogether gives us a larger pool of mediums to draw from: sculpture, performance, painting, video, costume-making, music, dance.  We seem to base the ideas on the specific presentation opportunity or venue, and it’s fairly anonymous, which means we don’t have to take full responsibility for whatever happens and tend to take bigger risks.  I certainly approach Inflatable Deities projects with a reckless abandon that isn’t as present in my other work.  Because of this, I think it has stretched us both in directions we wouldn’t take in our individual practices otherwise.  In your new body of work, The Fuzz, I see a lot of this cross-influence, but it becomes more refined when it’s just one person working.  I see the unpredictable space of our collaboration as a spark that fuels new ideas.  It’s important to have these opportunities to smash things and see how the pieces fall.

EMILY PELSTRING is an artist and animator who obtained her BFA from Rhode Island School of Design in Film/Animation/Video, and her MFA from Concordia University in Studio Arts with a concentration in Film Production. Emily’s artistic/research interests revolve around the historical role of emergent imaging technologies and their implication in the politics of representation. Video functions as a device for exploring the construction of identities in her work; and her work ends up sublimating or exploding notions of identity, representation, and narrative cohesion. These explosions are fueled by a post-modern, punk ethos and are often a result of an intensely collaborative, experimental process.  Her recent commissions include stereoscopic 3D animated concert visuals for Aids Wolf’s performance at the Musée d’art contemporain de Montréal, several works with Jessica Mensch under the moniker Inflatable Deities, and several music videos.  Emily’s work has been shown in solo and group shows at various galleries in Canada and the US. She recently co-curated “Forever Falling Apart”, a short program of animation, video art, and animated installations at the Blue Sunshine Film Centre and “The Distance Between”, an exhibition of stereoscopic 3D installations at Studio XX.  She currently teaches Media Production in the Communications Studies Department at Concordia University.