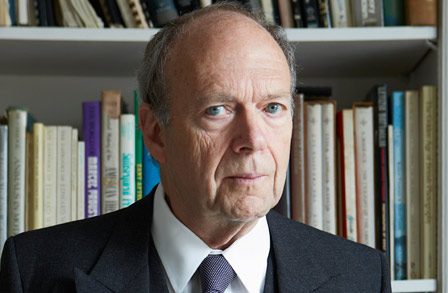 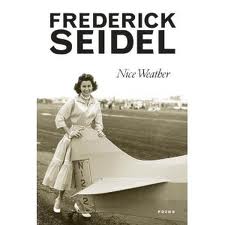 Frederick Seidel’s 15th collection of poems is written in what Edward Said called “late style.” Rather than displaying a torrid self-questioning of the poet’s previous achievements, as Said defines late style writing, the poems in Seidel’s book retain the inimitable voice he has developed over the past 50 years, but use it to confront death with more sobriety than ever before. Impending death, the loss of friends, ill health, the sense of disconnection that stems from watching your own body deconstruct: These are the subjects of a book that is titled, with a dubious blitheness that is typical for Seidel, Nice Weather.

Born in 1936, Seidel came of age as a poet when his first book, Final Solutions (1963), was chosen for publication by Robert Lowell, Louise Bogan, and Stanley Kunitz, a prize offered by the 92nd Street Y. The publisher, however, refused to publish the book, saying it was anti-Semitic. The prize committee resigned and got the book published by Random House. From the beginning, Seidel’s work has been polarising.

The stateliness of language present in much of Lowell’s poetry was clearly an influence on Seidel’s early work. Commenting on his influences in a Paris Review interview, a publication for whom Seidel had interviewed Lowell, Seidel said, “there was the example of Lowell, who was writing his own kind of monumental style. I admired Lowell immensely.” That style would come to be one of the defining aspects of Seidel’s poetry as well. Each of his lines is constructed with a sense of finality, evident not least in the fact that he continues to capitalize the first word of each line, which in 2012 is almost like wearing a bow-tie, or the double-breasted waist-coat Seidel is photographed wearing on the dust jacket of Nice Weather. The collection’s opening poem, “Night,” is a fine example of this style:

The city sleeps with the lights on.
The insomniac wants it to be morning.
The quadruple amputee asks the night nurse what time it is.
The woman is asking for her mother,
But the mother is exhausted and asleep and long since dead.
The nun screams to stop the charging rhino
And sits bolt upright in bed
Attached to a catheter.

Seidel’s craftsmanship is clear. But what is peculiar to his style is the combination of monumental language with an aggressive sensibility, a manipulative mastery of imagery, and the thick-tongued eloquence of the louche professor. Reading Seidel’s lines is like watching a drunk pirouette; you never know when he’s going to tumble to the ground, or at what angle. Seidel rarely tumbles.

But Lowell’s manic focus on himself, which earned him the title of “confessional” poet, couldn’t be farther from the personal impersonality of Seidel’s best work. It’s diplomatic, really, his ability to construct a polite facade, even while discussing cunnilingus and Obama in the same breath. But there is never much of an illusion that we are getting “the real Frederick Seidel,” for his poetic personality is clearly a construct. He refers to himself in an earlier poem, and in one poem in this collection, as “The Evening Man.” This is the man in patent leather shoes being driven to the opera, or breaking the speed limit on his custom Ducati racing bike. There is no doubt that much of the jaw-dropping luxury Seidel writes about accurately describes his life (he has written extensive essays on racing motorcycles, for example), but it is clear that these interests are trumped up for the sake of poetry. We catch a glimpse of the purposefulness of this persona in the poem “Lisbon,” which contains a reference to the great Portuguese poet Fernando Pessoa, who wrote under multiple pseudonyms, each with their own specific style:

And it’s off in a cab to Brasileira, the cafe in Chiado
Where Fernando Pessoa spent so much time writing his immortal
Multiple-personality-disorder poems,
Now called Dissociated Identity Disorder.

One gets the sense that, in poetry, at least, Seidel is intimately familiar with this disorder. Nice Weather contains numerous references to a dissociated self. Often it’s tongue-in-cheek, as in “Dinner With Holly Anderson:”

My fourteen books of poems
Tie a tin can to my tail.
You hear me fleeing myself.
I won’t get away.

But other times less so, especially when concerning the horrors of old age. Here the concept of lateness appears, as in “Midterm Election Results, 2010:”

My old buddy, my body!
What happened to drive us apart?
Think of our trips to Bologna.
Think of our Ducati racebikes screaming.
We drank hypersonic grappa.

Throughout the book, we find a narrator at odds with his body, and often watching himself act, like a dreamer watching the dream, but unable to influence it. Two examples, “Store Windows” and “Do Not Resuscitate,” also introduce the trope of sleep and tiredness in reference to impending death. “Store Windows” ends thusly:

The naked man, after climbing the steps out of the subway,
Has moderate dyspnea, and is seventy-four.
He was walking down the street in Milan one day.
This was long ago. He began to snore.
He saw a sleeping man reflected in the window of a store.

The poem “Do Not Resuscitate,” ends with the following lines:

The man can’t stay awake
He wakes and sleeps.
It’s either age or it’s his medications.
He’s giving me the creeps—
All the poems he wrote, and so few dedications.

These poems not only look upon the self, but look upon the self’s personal history, as in the final line of “Do Not Resuscitate.” Many of the poems in Nice Weather are concerned with reflection: Sometimes literal reflections, as in “Store Windows,” but mostly, it is reflection upon a life lived. And, in as much as these poems are in late style, many of them seek to right previous shortcomings. As if noticing, as he reveals in the final line of “Do Not Resuscitate,” that much of his previous poetry has been, in a sense, selfish, Seidel includes numerous poems in Nice Weather dedicated to others. The collection itself is dedicated to Karl Miller, founding editor of The London Review of Books. The poem “Charlie” is dedicated to Seidel’s friend Charles P. Sifton (1935—2009). “Moto Poeta” is written In Memory of Stephen A. Aaron (1936—2012). “A Toast to Lorin Stein” is dedicated to the editor of The Paris Review. “They’re There” is written In Memory of Frank Kermode (1919—2010). “One Last Kick For Dick” is written In Memory Of Richard Poirier (1925—2009). The poem “John Updike,” in a poignant suite of poems entitled “School Days,” begins:

Updike is dead.
I remember his big nose at Harvard
When he was a kid.

Clearly then, death is a major theme of Nice Weather. But Seidel never allows himself to slip into the maudlin. It is this cast-iron constitution, the ability to look into the triple-bypassed heart of darkness without flinching, that allows Seidel to end a poem about visiting the grave of Samuel Beckett in the Montparnasse cemetery in Paris with dismissiveness:

And now it’s time to get the fuck out
of this beautiful pointlessness.

This element of Seidel’s style is one of his most intriguing. When it doesn’t slip into self-parody, which it only rarely does, Seidel’s style allows him moments of intense beauty that retain a quotidian immediacy that makes them even more appealing. His mastery of linguistic register allows him such stark contrasts of tone and subject matter, that his poetry does, in its way, achieve a kind of multiple personality: His language moves in two ways at once. Yet the integrity of Seidel’s lines and the stark insistency of his voice hold these poems together. Mark the final quatrain of “The Yellow Cab:”

The million leaves on the Central Park trees are popping
Open the champagne.
There’s too much joy. There’s no stopping.
Love is on top, fucking pain.

Central Park, champagne, springtime: These are familiar tropes in Seidel’s poetry, and Nice Weather does not break new ground in terms of his style and subject matter, but then again, it doesn’t need to. Seidel is a master, and his voice is one of the most intriguing in contemporary American poetry. In Nice Weather we see a further maturation of his voice, and, finally, not just a looking out at the strange world, but a looking back on what has been most familiar and most dear. It is an achievement.