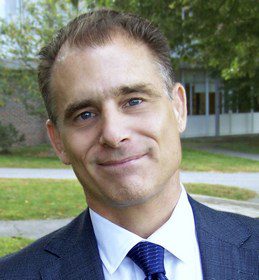 You need an example of how this knotted world
Adumbrates the meanings of words? I have one: “Afghan.”

Seventy-three per cent of American
Families possess greater than one afghan.

Most afghans are legacies, passed down by rule:
One grandmother, one grandchild, one afghan.

An allegory of justice: the magenta skein ends
Yet there’s enough hot pink left to finish one afghan.

Zig-zags, stripes, and diamonds; lavender, puce, and lime;
You’ve seen them all, if you’ve seen one afghan.

Lambswool, viscose, alpaca, ramie, hemp—needles
Speak dialects, but the language is one: afghan.

At the World Trade Center, the bomb-sniffing dogs
Are shepherds, and Labs, and collies—not one Afghan.

Of thirty-four corpses on an acre in Helmand,
One is American, thirty-one Afghan.

This knotted world is a transcript, Daniel, and words
Have greater than one meaning—one American, one Afghan.

At one of two round oak tables
I inherited in ’06, I seat
My older brother’s favorite book,
Animal Farm, my sister’s make-up case,
An armor-piercing sabot father took
From a Korean army base,
And one of mother’s all-but-complete
New York Times crossword puzzles.

Eyes closed, I conjure from each guest
Phantasmagorical extremities
Which, reaching right and left, offer “hands”
I picture as I saw them last, in life:
My sister’s hot pink nails, my Dad’s
Liver-spotted knuckles, my mother’s dashed life-
Line, my brother’s cracked, grease-
Clotted cuticles. Each fades at the wrist.

We know why we’re here—or I do,
Which is what matters, now. It’s time
To talk, not through a Pall Mall
Cloud, not in the Cold War accents Smirnoff
Taught. It’s time to talk about our colossal
Error—being a family at all. A cough
From Ordnance prompts only deft slant rhyme
From Miss Manicure. Will Shortz ahems. Orwell, too.

Is it the power of a spirit
Circle—ghost electrons inscribing shells
And releasing love in indeterminate quanta
By powers of ten more powerful than any
We ever felt alive—that makes my dead want to
Clear clear throats? For an uncanny
Half an hour, we hold “hands.” When the spell’s
Broken by my ringtone, I am the last to hear it.

The silence that falls is unique;
Immediately heavy
With absence. Too difficult puzzle, sabot,
Make-up case, and allegory—
All are by nature and habit
Silent. And yet it feels peremptory,
Their unwillingness to speak,
Expressed as a preparing to speak.

In my basement, four separate stacks
Snap to attention by flashlight,
Shouldering epaulettes of dust. I nod
“At ease,” but the khaki ziggurats and pillars
Salute me still. Though I seem like a god,
I’m just my parents’, and brother’s, and sister’s
Keeper: I know each relic’s right
Resting place, which is arid, and cool, and black.

The twelve steps up, past
Cobwebs, horsehair, lath, and plaster,
Require that I acknowledge a higher power.
When I check my messages, T-Mobile
Shows four bars. You’re coming by in an hour.
By that time I’ll have ennobled,
Once again, the quiet, medium-sized disaster
I alone try to live, or live out, or outlast.

The marble floor outside the obstetrician’s
Teaches a lesson straight out of Athens,

Catching every mother’s tear to fall—
Joyful or angry, confused or hysterical—

With a face so slick, so hard, the bubble ever level,
It’s an affront to every panicked fontanelle

That rushes, in the womb, Pangaea-like, to close
A hideous, still-open, almost egg-shaped skull.

No other skeletal
Structure of the human creature

Can better take a blow.
But as we know,

“Skull” means shit to a shovel
Or a steel toe.

DANIEL BOSCH‘s book Crucible was published by Other Press in 2002. More recent poems have appeared in the TLS, The Istanbul Review, Berfrois, Slate, and The Paris Review, for which he is currently working on an Art of Poetry interview with David Ferry.