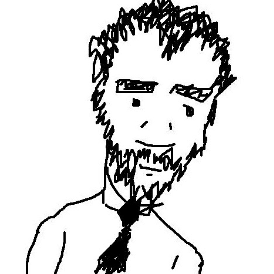 THE EMPEROR OF THE EMPIRE

There was no such thing as salt, nor
was there a taste called salt, nor did anyone
wish his meat or his bread salted
or its bitterness soothed by salt, nor
were there tongues to appreciate salt
or the absence of salt, which was what they had,
though, of course, they did not know it, though
perhaps they had, before the Emperor of the Empire,
a space in which there was nothing, but which
they probably used for resting coffee cups
and knick knacks and hummel figurines, a space
of no importance that might, should the occasion
arise, be used for the sensation of salt, for the
desire to experience saltiness, which surely
they would, which surely they could not avoid,
once the Emperor of the Empire arrived
to tell them about the Empire and to give them tongues
and to tell them how they tasted.

That is my name on the billboard.
I recognize it from my identification,
where it is typed beneath a crude rendering
of my face, which is also on the billboard
though it does not resemble me: a woman
with a seashell pressed against her ear.

I am standing under the air surrounded
by sections of light like big aquariums.
I am on my way to the coastal village
to visit a friend who lives there, I carry
in my jacket the letter he has written:
a drawing of my friend writing a letter.
He is transparent; behind him is a sheet
of dirty paper covered with my fingerprints.

The billboard makes a sound like a motorized ocean.

Once I found a piano wedged under a slab of rock.
The keys smelled like a woman I had married.
Often I dream of her — a tournament of innocence
played in lycra with stone tablets.
It’s hissing in the forest there
and the pine trees shiver in a haze.

I ask the billboard if it knows my friend
or the place in my memory to which I return.

The Twilight City.
The Dawn City.
The City That Smells Like a Piano.

The billboard is covered with lights
and the lights are the color of oceans
in which I remember swimming:
a toy boat, a paper kite.
Often I would lean against a high wave.
Often I would press my ear
against an automobile’s hood or a frayed suitcase.

The wind has sawdust in it.
When I cough sawdust comes out of me.
The wind sways the billboard
and rustles the curled flaps of paper
peeling from its edges.
Behind it is the road to the coastal village
where they play a game of cards
that tests your ability to remember.

I cough like I have a kite stuck in my throat.
I am late. It says so on my identification.

One of the cards has a bird on it.
My friend has enclosed it with the letter
he has sent me. It is in my jacket now,
which smells like seawater and pine needles.

I am on my way to the coastal village,
a collection of cedar shacks and saltwind.
They have to nail the cards to their flimsy tables.
It is difficult to turn them over.

KEITH DRIVER was born and raised in the Commonwealth of Massachusetts. His poems have appeared in Third Bed, Jubilat, Pindeldyboz, and elsewhere.