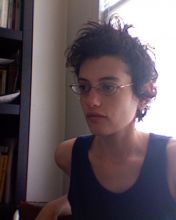 GRIMLY HANDSOME is a new play about killers, police detectives, and animals that premiered on January 3rd, 2013, in the Other Forces festival at Incubator in New York. (The show runs until January 20th. Click here for tickets). The following passages are from a novel that exists in this play.

“I had no desire to come to his attention.”

“But Dominic, we need you.”

Dominic dropped the butt of his cigarette and crushed it under the sole of his Hugo Boss loafer. He had always taken a lot of shit from the guys over what they called his “fancy” way of dressing, but he’d never even been tempted to give it up. He was a firm believer that most people treated you better, took you more seriously, once you gave them a look at your market value.

“Lawrence is an asshole,” he said simply.

Moran shrugged. “Nothing I can do about that. But Dom, he wants you on this too. He may be an asshole but he knows an ace profiler when he sees one. And you’re the best in the business.”

Dominic hated flattery worse than low-sodium soup, but he could tell Moran was being sincere. “All right,” he said. “Have the boys messenger me the crime scene photos ASAP. And tell the asshole I’ll take the case.”

It was to be the most fateful decision of his life.

The place was deserted. Except for a couple of down-and-outs nursing cups of coffee. The waitress was nowhere to be seen. In a joint like this that was probably for the best, ha ha. He could hear the faint sound of someone moving around in the kitchen, but he decided not to make his presence known just yet. Eventually the cook emerged. He was completely bald, with beady eyes, and sweating profusely. “Help you?” “I wonder if you can,” said Dominic. “I’m looking for someone I hear’s a regular customer of yours.” “Look around,” said the man, and started shuffling back in the direction of the kitchen. “Hang on.” The cook turned around. He was a good head taller than Dominic, and now he fastened on the detective’s blue eyes with his own beady ones. “You police?

“Dominic.” Says the cook. “Let me tell you about it. Let me explain what you are seeing. This is a moment of great global unhappiness. For example, my mother. Her feet are swollen so she can’t walk. Just an example, she’s not here. What is it, what do you see that you haven’t seen before. What are the clues. Come on. Here is a clue: a rat. Yes, a little animal rife with disease. Sitting on your bed when you open the door. Making a little nest on your pillow. The bodies of lesser creatures are lying all over the room. Plundered. Chyewed. Now. Do you make friends or what.”

Dominic says: “I don’t go in for parables.”

He’d seen it a hundred times, and he still couldn’t get used to it. Dead men bled out on the pavement because a junkie needed a fix; wives and mothers battered and bedraggled, old before their time; old couples beaten on the way home from the movies by some joker with something to prove; and always the shouting, the crying, the constant chorus of outrage and grief that surrounds every corpse like Dolby. It was no picnic, but he’d learned to live with it, learned to let it go when his head hit the pillow. But this, the way the kid looked up at him, like he was scared Dominic would hit him, or worse—crud in the corners of his eyes, his blond hair filthy with god knows what fluids—this he couldn’t get used to.

No matter how hard he tried.

“Jimmy,” he said to the little face, “I’m not gonna hurt you. Jimmy. My name is Dominic. I’m a detective. Do you understand me? Good. Now, me and these other guys, we wanna find out who did this to you.”

The kid shifted in his chair and looked up at the ceiling. When he spoke again, his voice was pitched high with annoyance, as if someone had just told him to stop playing video games and wash up for supper. “What?”

In fact, Dominic wished he could tell the kid to wash up.

“I don’t know what you’re talking about.”

“Look, Jimmy. I know you have a hard time trusting people. I’m the same way. What if I send these fellows out to get you some lunch and meanwhile we talk just the two of us.”

“I’d rather have a cigarette.”

He thought about it for a moment, then reached into his pocket and tossed the kid his pack of marlboros. “Just between you and me. Guys, if you wouldn’t mind. Mercutio, pick us up a couple big macs and some cokes.” Grumbling, the other men cleared out. “So what happened?”

“I guess the guy got mad and hit me.”

“I don’t know. The redheaded guy.”

“That’s him.” The kid probably had no idea what a congressman was. For that, Dominic almost envied him. “What were you doing when he hit you?”

“You hang out with grownup men a lot?”

“They pay you to hang out with them?”

“You could go to jail for that.”

“That may be true, but. The words you use don’t really attach to anything. Don’t attach to my experience of a night or a morning or an afternoon or a meal or a fight or a high or a prize or a fuck obviously if I did know the answer to your question. Another example is ‘congressman,’ that’s a piece of inflated language, it’s drivel.”

“Buy a ticket to my seminar.”

Outside, pink and silver clouds were racing past the window. In the street, shopkeepers raised the metal grates over their windows, then lowered them. Then raised them again.

The kid continued: “The congress man, as you call him, runs a ring.”

“But,” said Dominic weakly, “he is a congressman.”

“What about your big mac?”

“That was weeks ago. He runs a ring of victims. You have everything you need to convict.”

“Victims of what are we talking. My head—”

The kid spoke quickly: “I have a face and a neck and a body that hurts men’s hearts. One look, one look and you’re broken. What can’t you want from me. This is what I mean by a victim.”

The kid looked at him with wide eyes.

Dominic remembered the kid was afraid. “Are you afraid of me?” And then he realized he’d been mistaken. “Am I…” It was the other way around. “Are you…?”

Just then the guys arrived with the grub.

JULIA JARCHO is a playwright and director from New York City. Her plays include Dreamless Land (New York City Players, 2011), American Treasure (13P), The Highwayman (Missiles With Teeth), A Small Hole (Performance Lab 115), and All I Do Is Dream of You (Sophiensaele and English Theatre Berlin). She recently collaborated with the artist Meredith James on a sculpture-and-video adaptation of her play Delmar, coming soon, and her newest play Grimly Handsome will premiere in New York at Incubator this January. She is a member of 13P. Artists she has worked with include Richard Maxwell, Mark Ravenhill, Ami Garmon, Benjamin Gassman, and Ásta Bennie Hostetter. She has been a writer-in-residence at the Eugene O’Neill Playwrights Conference, a winner of the Berrilla Kerr award, and a Resident Playwright at the Playwrights Foundation in San Francisco. She is also a doctoral candidate in Rhetoric at UC Berkeley.

Read more by and about Julia Jarcho: