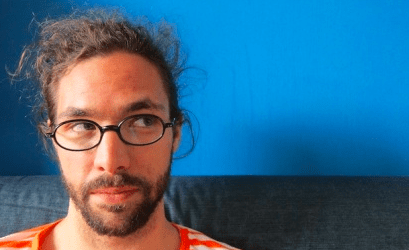 the wren (work in progress)

– Translated from Czech by Tereza Novická

Heard recently
about some conceptual artist, can’t
recall his name but here’s a shout-out! He
showed what a Christian cemetery would be like
if Jesus had died on the gallows
didn’t see the rendition, but guess
it was a cemetery full of little gallows Yesterday
a bird flew into the flat through an open window, crashed
into the wall, fell on the ground, came to
spread his wings again and sat on a picture frame
evidently in shock
but
what would a cemetery look like if Jesus had
died as a result of a death adder bite
or self-immolation
in catacombs on a rack
or due to an unfortunate fall under the wheels of a passing tram
by jumping out of a window propelled by severe manic depression
or a fall caused by a grasp
into thin air while washing windows on the 6th floor
if he got the electric chair
Locked the cat in
the back room and cautiously
drew nearer to the birdie He looked
on, motionless and emotionless and he either
must’ve known he would get snuffed out
and then nothing mattered, or he thought
that he wouldn’t and either way it doesn’t matter
what would it have looked like though, if Jesus had
died from a bullet to the back of the head during the Babi Yar massacre
if he had become an alcoholic and died
from all life functions collapsing
if (neo)nazis stabbed him and he succumbed
to the wounds and a brain haemorrhage
if he troubled himself to death
if a bull punctured his lung and injured his spine because
he thought he had what it takes in Pamplona
if he got buried under by a methane explosion in a Polish mine
if he fell off a balcony and died after a long life of a cripple
if he got a heart attack on the football field and didn’t finish the game
if he died a junkie
if fat clogged his circulation system or
he succumbed to colon cancer
if he ODed on insulin
if he brought back a rare disease from Malaysia and the doctors weren’t able to help
if a shrapnel from a missile tank
tore his stomach apart in the Gaza Strip and he bled out
if he died in an on-line youtube broadcast
if he didn’t return from a NASA space mission, from a military mission
in Vietnam, Afghanistan, Iraq,
if he got an arrow to the back with the tip dipped in curare
if a bear attacked and fatally wounded him in Tatry
if a rabid fox bit him
if he succumbed to various infections after 8 years of living on the street
if he had a brain tumor
if he forgot who he was and died as someone else
if he didn’t die because Eve couldn’t be bothered by apples and Adam was just
a dork with a big vocabulary
if he died for his king / for his country / for mommy / for daddy
if he was subjected to poison hemlock in his ear
or wine too pure
if he was a Tutsi
if he came to the end of his rope during a tourist crossing of Greenland
or during a ship passage from Africa to a Dixie state
if a car ran him over at the crosswalk and it was a hit-and-run
if he died during the last cholera pandemic that swept over Europe
or by contracting AIDS after treating patients in Africa
if he drove early in the morning to work and a truck smashed into him
he touched wires fallen on the ground
he fell over the rails of a ferry and no one noticed
if water ran out in his native village fourteen days before
and humanitarian workers never showed up
if he went for a swim off the Australian shores and got caressed
by a box jellyfish
if he sat down next to a suicide bomber in the subway
he was liberating Chechnya but a Russian sniper saw him too clearly
or he drank sulphuric acid instead of water that was in a glass
right next to it
was a newbie in Custer’s regiment
accepted a blanket as a gift from the pale faces with a smile
and took one for his squaw as well
if missionaries exemplarily burned him at the stake as a warning
if he forgot to disconnect the fuses as he examined the wiring in the kitchen
if he overstepped all boundaries
or none
if his attempt to get into the Guinness Book of Records ended tragically
if he decided to eat a box of nails and top it off with tartar sauce
if he danced, drank, and made merry in 1431
until the Black Death came to collect its dues
if he didn’t get the job in the Nike factory in India
and neither did his mother or father
if

The bird looked on with indifference and it was as if
he’d been getting ready for this since spring
for the journey into the composition of the painting by František
Dvořák, which kind of resembles
a pale figure (something like an angel) that
is sinking into dandelion
possibly Greater Celandine yellow This
painting sometimes shines and sometimes
just throws a fit Don’t actually know how
Tereza’s grandfather intended it, but
what if he didn’t intend anything and just
HAD to paint the painting, nothing
more no drama no romance
no psychology? The tiny brown
speckled bird on the picture frame
decided to calm the angelic
rage of master painter Dvořák’s composition
and my closing in on him couldn’t hinder it
No intention of surprising – The wren,
a small cinnamon-like brown bird with its tail
directed at a nearly right angle. Takes
refuge in thickets. Displays low and zippy flight. A
winter songbird that belts out its brassy
and surprisingly resounding melody even when
frost and snow abound. In early spring the male bird builds
a row of “playground” nests – sometimes exceeding
a dozen. They are usually situated near tree roots, in ivy
thickets, in brushwood piles, rarely
higher than 3 m. The bird occupies the nest for 14 days, after hatching
the babies stay there for 17 days. The wren frequently
hosts the cuckoo. The fragile bird loses
more body warmth during the night
than birds of larger size. This is why a greater number of wrens endure
the winter night together, huddled in one
nest (Sauer, F.: Ptáci lesů, luk a polí. Prague
1995, p.234) and the wren
from the picture frame nestled in the palm of the hand without
protest Stood on the balcony, feet
grounded the bird perched on
an index finger Urging Come on
dude, fly off already, will you? And he did

ONDŘEJ BUDDEUS is a Czech translator, poet and essayist. He studies at the Faculty of Arts at Charles University in Prague, where he is writing his doctoral thesis in Scandinavian studies. He translates from German and Norwegian (Josef Winkler, Theodor Herzl, Jan Erik Vold, Audun Mortensen, Christian Futscher) and is editor-in-chief of the Czech contemporary poetry magazine Psí víno. Some of his texts have been translated into German, Italian, Polish and English. In 2011 he published his début poetry collection 55 007 znaků včetně mezer (55 007 characters with spaces) which was nominated for the Magnesia Litera, Cena Jiřího Ortena and Bank Austria Literaris 2012 prizes. He has also collaborated with Alžběta Skálová and Martina Kupsová on the creation of a picture book for playful adults, Orangutan v zajetí má sklony k obezitě (Orangutan in captivity tends towards obesity).

TEREZA NOVICKÁ grew up in San Francisco, California and moved to the Czech Republic in 2000. She lives in Prague, where she studies Anglo-American Studies at the Faculty of Arts, Charles University. She has translated various Czech and Slovak poets into English including Ondřej Buddeus, Jan Těsnohlídek, Sylva Fischerová, Lenka Daňhelová, Martin Skýpala, Vlado Šimek and Pavel Novotný.
She is an assistant director at the annual Prague Micro Festival.