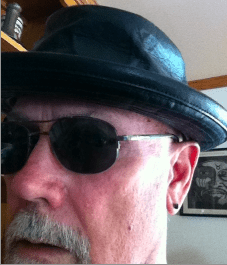 THE LAST SET OF MACHETES

Man, I don’t want to do this, Bald Guy says as he kicks at a rock.

Black Guy and Bald Guy are picked up outside the commissary in a studio golf cart and whisked away to the set of Quinn Kwan’s!, a talk show syndicated nationally in big markets, to promote their upcoming full-length feature, Black Guy and Bald Guy Save America from Strangers in Long Beards and Turbans.

Waiting for Black Guy and Bald Guy in their dressing rooms are the red-white-and-blue super-hero ensembles they wear as they fly back and forth in stunning long shots o’er ambered waves of grain, purplish mountains, and fruity plains, protecting USA life and property from sneak attacks that intelligence warns them about in secretly coded wireless communications. Hood, cape, full-body tights, chest insignia, and boots mid-calf. The works.

Thing is Bald Guy’s not on board with the movie’s political subtext. Neither is Black Guy, but Black Guy is much better than Bald Guy at picking his fights. Black Guy’s ready to promote the movie as mindless entertainment, downplay its xenophobia, point out (if challenged) the Spokane Indian who plays the Chief of Intelligence and the trio of characters who play his primary agents: a neatly bearded, fortyish Iranian-American in a shiny suit and blue high-tops, a lanky twenty-something Korean-American obsessed with white gloves that seem to be anchored in the bend of her elbows, and a Mexican-American, former boy-toy pop star dressed always in what looks like a brand new pair of red leather pants no matter the severity of the preceding scuffle. Though unimaginative bureaucrats the first 90% of the movie, the trio generates sympathy for themselves when they dive in front of the last set of machetes aimed at Black Guy and Bald Guy.

Bald Guy says, Tell me we’re not wearing the hoods.

Bald Guy says, Strangers in Long Beards and Turbans? Might as well be Zombie Gardeners at the Border with Rakes and Shovels. Or Moccasin Zombies with Broken Wine Bottles. Backyard Viet Cong Mole Zombies Coming to Your Neighborhood Soon, as in Now.

Bald Guy says, Who agrees to wear stretchy material of any kind on a talk show?

Bald Guy says, You’re a single man with a lot of money. How about Zombie Gold-Digger Hypnotists? Follow the shiny disc back and forth, tit to tit, tit to tit. Repeat after her. Hold the pre-nup. Hold the pre-nup. Let’s get out of here and go hate on some beautiful women for having good business sense. How about Black Guy and Bald Guy Save America from Sexy Women with Pocket Watches?

Bald Guy says, Did I mention the body-hugging fact that we ain’t twenty years old. You ever been to a super-hero bar? Old dudes in masks and padded spandex. Ain’t no women there. Except for Wonder Woman and you don’t want to mess with her. I’ll spot you the eternal charm of capes, but in that movie we ain’t nothing but a couple of airborne John Waynes deciding who’s a zombie and who’s not. You cool with that?

Bald Guy says, Not to mention there ain’t no body doubles on talk shows. TV puts ten pounds on you.

Shit, man, Bald Guy says. Long Beard’s nothing but code for the Other, which threatens the purity of the dominant’s blood and the property that comes with it. Dark to their Light. Emotion to their Reason. I got to spell it out for you? Zombie’s got an Afro. Frankly, I don‘t know how you do it. I need a beer. Ms. Kwan better be serving some cocktails or I’m going Geronimo Hillbilly on her ass. A tray of Frozen Zombies right there by the interview couch or I’m not leaving the dressing room.

Black Guy checks his watch and says, Get out of the cart, Bald Zombie. Thirty minutes to show time.

STEVE DAVENPORT is the author of Uncontainable Noise, which won Pavement Saw Press’s 2006 Transcontinental Poetry Prize. His New American Press chapbook Murder on Gasoline Lake is listed as Notable in Best American Essays 2007, and a story of his, published in The Southern Review, received a Special Mention in Pushcart Prize Anthology 2011. Of special interest lately is his Black Guy Bald Guy series. Installments can be found in the Summer 2012 issue of The Massachusetts Review and on-line at Diagram, MAYDAY, The Literary Review (his chapbook, Nine Poems and Three Fictions, available for free downloading), and Spork (with podcast!).

Of late the good folks at the IWW (Industrial Workers of the World) newspaper have taken a shine to his labor. Here’s an example. Here’s another. About “Hartford, Illinois” and other poems in Uncontainable Noise, IWW columnist Eric Miles Williamson claims, “Steve Davenport writes like Charles Bukowski might have written if he’d had more talent or been able to hold his liquor better.” Davenport doesn’t endorse that claim but wouldn’t mind seeing it on tee shirts. His second book of poems, Overpass, will be published this year by Arsenic Lobster/Misty Publications.