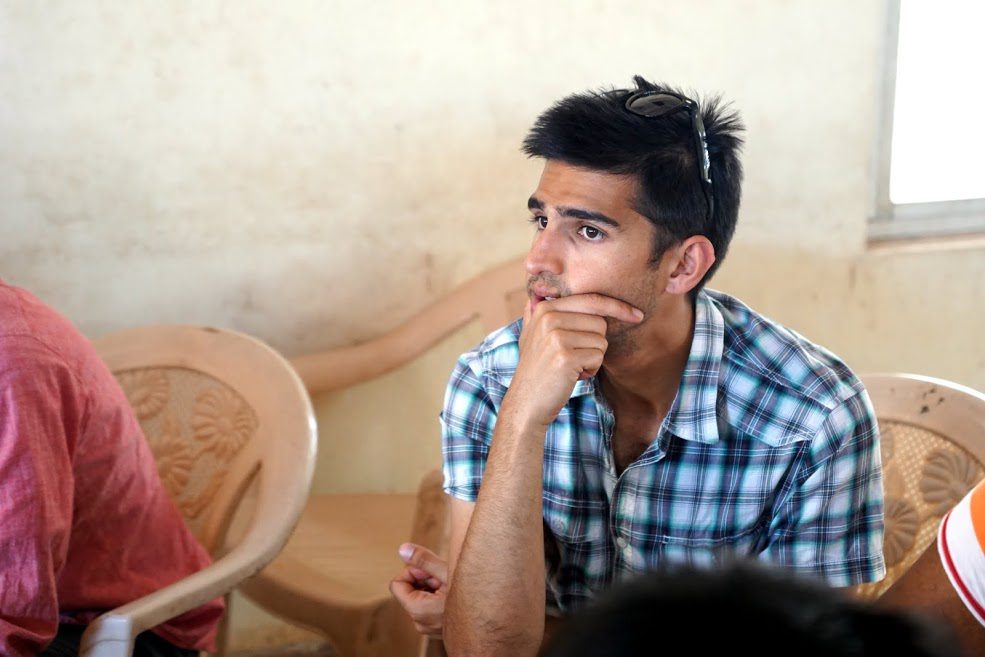 There was one day that Ashok was caught in a bind, the last time he had taken a train in India. He’d just gotten word that his wife had given birth to their child in Ahmedabad and the next train out of the city was due to leave soon. His mother had told him not to bother, as she sat rapt in front of the transistor listening to All India Radio cobbling together scraps of copy to try and keep the news flow going when they didn’t have much to report. Two bombs had gone off in the heart of the city in the bright and clear Tuesday and the streets were at a standstill, a sight unknown in the city he’d lived in since before his memory could recall. His scooter even could not even find fissures between Tatas and camel carts to weave through. He kept telling himself it was foolish, but the impetus to move grew as he saw a man with a fresh tilak and garland, perhaps soon from the temple, weeping over his child’s body in his arms, a girl with pigtails cut from shrapnel.

He had not heard the bomb blasts when they happened, but now in the calamity the world seemed to slow down and focus, and he drowned out any of the screams and the horns and the sirens and focused only on the quickest way to get to the platform. He could have held back a day, as the baby was safe almost two hundred miles away and far from any of the unrest that was quickly fermenting around him.

There was word that the mafia was behind it, which meant Muslims, and the cranky old sores of centuries past were seeping again, and blood was due to flow again in the streets, despite the bodies that were already being carted off.

He knew little of how this part of the city worked, where men carried briefcases and sweated away in suits because India was a capitalist empire in the hearts and minds of many, even the ones on the sidelines like him who worked in small shops and saw only the same stream of neighborhood faces day in and day out. Around him, there had been Muslims yes, and Bengalis and Sikhs and plenty of native Marathis who kept griping about the outsiders who’d taken shelter in the seaside metropolis that at any moment could crack under the weight of overpopulation and break apart from the continent as it’s own island nation.

He’d fallen through net after net of jobs, each one snapping away as small mistakes and careless oversights cost his reliability. There was first selling transistors, which he hocked at small offices; over worked doctors and rag papers; people who needed the diversion from the hot daily slog. But he wasn’t good at selling the virtues of a machine so commonplace and older than him; so they sent him away with one to keep himself at home which his mother now kept by the kitchen table, paying it more attention than he. There was the job as a hospital orderly his cousin was able to get him, working side by side carrying pumps and vials as bodies mourned about him, but medical altruism forced pushed the staff to accept more under and non-paying patients and soon a budget cut left him again without options. His friend Manoj finally put him to work the front of his photography shop, Manoj himself a screw up after falling late for his first photo session with the Times of India and now taking odd jobs snapping weddings and Bollywood parties at the studios in their backyard.

Here he was, with a degree in economics from which he retained very little. On a lark, he’d applied for a visa when he’d heard that the US had softened their tight reins. His brother had gone before him with a scholarship to MIT back in ’69, but he’d passed away under dubious circumstances and since then America was regarded in his home as a dark place where only pain and suffering wait.

But here, he had more of the same. Even without prospects in life, his parents had pushed him into a wedding hoping that it might spur a new maturated avenue for him. But a small flat left no space for his wife and so they’d spent the first year apart, with only a few weekend trips to Gujarat to build a relationship on, one of which left her conceived.

At first, he did not even consider her part of his half-thought plan to move to America. It could be a clean break. There he could settle again. He’d heard of people making fortunes on jobs not too dissimilar to what he’d been doing here. He could find a pretty white wife with blonde hair and have mulatto babies with Sanskrit names and Yankee accents, and somehow without any knowledge of how that future could play, it seemed comfortable and self-sustaining.

But in the distance of an hour, life had traveled a road longer than he could make out any more. Beside his scooter, the man with the garlands had collapsed where he stood, and laid his girl in the street, unable to carry her father. Ashok now saw the man too had a patch of red forming under his shirt, and he was heaving with strain. There were two, three, no four ambulances he could count around him, all wailing loudly and unable to move, like distraught children, and it was clear the man so close, would never be able to get the girl into one of them, fetched away to a hospital.

It was unruliness that shook him apart; the uncertainty, the unreliability. The impossibility of fighting against the movements of the world. A city unwilling to cooperate with itself fragmented into millions of selfish agendas.

And though now the man with the garlands through his tears and disheveled bangs, looked up to him, and eyes locked, Ashok knew the blood of a few hundred could not compare with the commutes of a few thousand. And so he left the scooter where it was, and began jogging to Victoria Terminus, knowing it would still run regardless.

As he ran, he seemed to be the only one heading in his direction, deeper into downtown. The rest fled the other way, worried that there were more targets in store, perhaps the Gateway to India or the Taj Hotel nearby. The stalls selling pani-purri and vada-pav were left standing by their merchants, and slum children had flocked around pocketing to make dinner for the evening. They seemed unafraid or unaware of what was going about them. A policeman came by and shooed them away, trying to keep a small order when there was none elsewhere.

A blast rippled through the allies from the West, one of the buildings that lined Marine Drive. About him, people exchanged glances, nearly rolling their eyes as if to say, another one?  The tide suddenly shifted, and Ashok was suddenly flanked from the left by people rushing to avoid the new source of fallout. One by one, the bombs pushed the hordes this way and that like herded goats.

He wondered if VT could be next, as he rounded the corner and skipped down the steps into the station. A siren roared in the hollowed structure. Above him, the schedule was in flux, with several trains marked “CANCELLED” while others still remained with posted times. His train, the 3:30 to Ahmedabad, was still set to board at platform five. He kept pushing his way through, wondering if perhaps that very moment a bomb could go off beneath his feet, and end his worries then and there. It wouldn’t be unwelcome, to become one of the martyrs of the day, to know that for as little as he’d amounted to so far, there could be a convenient way to relieve him of his pressures while also validating his passage from this life to the next. Perhaps he could even return to this Earth as an American, if Hindu Gods were so cosmopolitan.

The train was still sitting there on the platform, delayed by an unsure operator who kept debating with the station chief if a moving target was a better option than a stationary one. There were still a few devoted travelers like he, who had places to get to and wouldn’t let the inconvenience of terrorism divert them. He walked into a car and took a seat, which he could not remember the last time he’d been able to do so. And there he sat, still and silent, waiting for life to reveal whether he would make it out of the city at all, comfortable with either outcome.

When he reached Ahmedabad, his wife’s brother wasn’t at the station to pick him up as had been arranged. He called from an ITC booth, where his in-laws told him they hadn’t bothered coming since they assumed he couldn’t possibly be so crazy. They passed on their goodwill for his parents whom they’d been unable to contact, as they’d had been too stingy to exchange phone calls or letters. For them his wife was a means to an end of getting him out of the house, and since that plan had petered out, there was no real reason to engage further.

So he sat quietly in this new town, debating whether he should call home himself and make sure that his own quiet suburb hadn’t been attacked. On the television the news had finally caught up with the mess. As many as twelve bombs had gone off as the countryside had passed him by, while he talked with a man in his berth over tea. He was a banker, and he’d heard a bank had been bombed, and hoped to god nothing was left of the damn place. He was going back home to get married himself, and Ashok shared his experiences of negotiating payment for caterers and pandits, the hassles his parents complained about for days then shrugged off once the event was over and done with. The banker asked him if he felt nervous sitting on the mandap, knowing his life was now attached to another’s. Ashok said not really, but did not mention the new life that he knew now he was irrevocably linked to, whether he liked it or not.

He did not get to the hospital until the next day, when visiting hours were back open. Fathers were allowed to stay over at the hospital, but as he’d been absent throughout the entire labor process, his in-laws worried the staff would create a fuss over this strange face, some stupid rumor about babies being snatched from maternity wards off-hours. He laughed at they would fret over such a thing, when he’d just come from real carnage. But with it all so far away, the different evils of different cities seemed one and the same.

ADITYA DESAI’s stories and essays have been featured by The Rumpus, The Millions, The Margins, District Lit, The Kartika Review, The Aerogram, and other publications. He received his MFA from the University of Maryland and teaches writing in Baltimore, Maryland, USA. He is currently shopping his first novel, from which this is an excerpt.