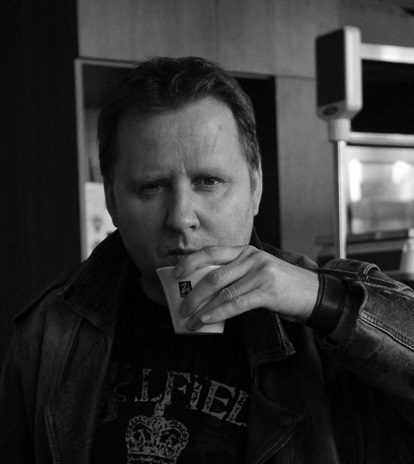 The writer bought a literary magazine, leafed through it, and was gratified: he hadn’t submitted anything and none of his work had been published. A few weeks later the annual nominations for the national literary prize were announced: to his relief, he wasn’t nominated. At last he appeared relaxed during readings, since he had nothing to read, and after briefly stating this fact he could happily walk off the stage and wander around the festival hall, chatting to the other attendees. When asked if he had written anything new, he would repeat that he hadn’t.

He soaked up their admiration and unspoken envy.

Don’t worry, you’ll also manage it one day, he said to one of them, and patted another who was almost there, the only thing missing is the proverbial dot on the unarticulated ‘i’.

And all those amazing people he met: take that nice couple of publishers of travel books and reportage, with whom he spent a long evening concentrating hard on not committing anything to memory and, most importantly, on not taking any notes.

Or the boy and girl from the university! They asked if he would give them an interview for their college radio station.

He was overjoyed to turn them down.

Just as he was about to walk out into the rainy night, feeling great about a successful evening, in the doorway he ran into Zdanka, an old flame from the days of his literary noviciate. At that time Zdanka was already an experienced editor and the possessor of the most beautiful pair of eyes in the world. Women and their eyes are important for a novice and however ridiculous it may later seem, eyes and smiles and bodies do matter during one’s noviciate.

To put it briefly, at the time Zdanka understood his screwed-up soul.

He returned to the hall with her on his arm and achieved the ultimate: he barely said a word to her the whole time they were together, noting down exactly that much about their encounter, and published the exact same amount about it later.

On some nights he had dreams that were so thrilling that he wouldn’t be roused from sleep even by the stomping boots of the neo-Nazis who came to settle scores with some gay guy in the neighbourhood. His dream involved a great many twists and turns, full-blooded, fascinating and plausible characters, its storyline Stephen King and J.K. Rowling rolled into one. It was so powerful he could no longer sleep, woke up, and in the end heard the stomping boots anyway. For a moment he was afraid they had come for him, but these guys keep an accurate waiting list and apparently his turn had not yet come. For the time being, he was free to sit on his bed and rejoice that a fantastic idea had been revealed to him in a dream, just like that, free of charge, and all he had to do was seize it properly. So he went on sitting there making damn well sure he didn’t seize anything.

For a few days he was delighted with himself, feeling internally reinvigorated, indeed physically rejuvenated, the lines around his eyes had smoothed out and he had grown a couple of new teeth, but these proved largely chimerical and soon disappeared.

On a few occasions, he reflected on the fact that for a number of years now he had cut a ridiculous figure. He was often quietly observed from the sidelines by Katarína, a sweet, cheerful girl to whom he had never become too close to make sure she stayed sweet and cheerful rather than turning into a bitter toad who would tell all and sundry about her brief relationship with a former writer.

Various human stories paraded past him. Meliška joined him at the table in the afternoon, by turns weeping, laughing, tapping her mobile listlessly and happily swaying to the stimulating rhythms emanating from her headphones, which she offered to put to his ears, but he preferred to seek refuge from the rhythms in a novella by Johanides.

It was the third time he was reading it, would he ever get his fill of it? The novella is immensely sad, immensely sadder than Meliška’s individual human sadness, amounting to a model of sophisticated, distilled sadness, indeed the quintessence of sadness, a smooth transition from grey socialism to universal, global despair.

Not far from the café a dozen city bureaucrats were attending a meeting and at least two of them made a Herculean effort and managed to utter not a single word, with the minute-taker assiduously noting everything down; when she showed her notes to the writer later that evening over a glass of wine, he beamed with joy and photocopied her notes, never to use them for any purpose whatsoever.

Then he received a letter informing him that he had been awarded a three-month autumn residency in Salzburg. He took up the offer even though he hated travelling and travellers, and while there he thought every day of Thomas Bernhard, for whom Salzburg was a mortal disease, as he wandered the starched little alleyways, channelling Bernhard and mustering all his strength not to write. Subsequently he had to repay the grant but that wasn’t a problem because he had made a tidy sum on a reading tour of five Central European cities during which he didn’t read a single line, but was able to provide the audience with an explanation of why he wasn’t reading in public and thanks to his explanation the audience glared daggers at other writers at other readings, and when the other writers began to read, the audience booed indignantly, getting up from their seats one by one and taking their leave, while the other writers, feigning confidence though sounding increasingly anxious, persevered with their readings, some performing pirouettes and playing the piano at the same time but to no avail: the audience had been infected with the subversive idea of non-reading and set their hearts on a spontaneous recounting of anti-stories about nothing. But in the writer’s case, even the anti-stories about nothing were filled with the rustling of cardboard characters so the audience had no compunction about turning them into paper planes in the writer’s presence.

During one reading something resembling a Tupolev Tu-154 quietly sailed past his head: the character was an ageing bureaucrat who suddenly stopped receiving software updates, his colleagues kept receiving them but he didn’t, a situation he pondered as he stood with a cigarette on a terrace outside the factory opposite the management block, full of offices and managers. In the evening, when he was the only one remaining in his office, he pounded his keyboard helplessly trying to process the documents that had accumulated but the programme ignored him with electronic mockery. He brought this fact to his supervisor’s attention in writing, only to receive a caustic, wholly unprofessional reply. The following day he was named as one of those whose work was actually preventing everyone else from doing their job. After this, being given notice was a mere formality, the dot on the ‘i’ mentioned earlier in this perfectly wrought text.

The Tupolev Tu-154 descended to the parquet floor, the reading was over.

The audience charged down the stairs and the writer went off to spend the night in a luxury hotel where Václav Havel was said to have once stayed. Fuelled by this information, he spent the whole night wide-awake in the lobby, facing reception, ideas fizzing in his head like fireworks. It was quite unprecedented and rather productive: at dawn, he got up from the table, a still warm, completely blank, empty sheet of paper in his hand.

Contented, he knocked back a couple of shots of Fernet Branca and went to sleep.

BALLA (b. 1967) has been called the “chief alchemist of Slovak literature”, “the Slovak Kafka” and “the uncrowned king of Slovak outsiders and misfits”. Since his first short story collection, Leptokaria, appeared in 1996 he has established himself as a highly distinctive voice on Slovakia’s literary scene with short stories populated by a gallery of lonely, mediocre and often malicious and creepy individuals unable to relate to other human beings who often find themselves in bizarre or surreal situations as they try to escape from the numbing banality of their everyday life. Balla’s works have been translated into Czech, German, English, Hungarian, Polish, Slovene and Serbian. His novella V mene otca (2012, In the Name of the Father, Jantar Publishing, 2017) was voted Book of the Year by the Slovak daily SME in 2012 and in the same year awarded both the Anasoft Litera Prize and the Tatrabanka Foundation Art Prize for literature. Balla, who goes only by his surname, works in the local council’s audit office in Nové Zámky, a provincial town in southern Slovakia, a region with a sizeable Hungarian minority.

JULIA and PETER SHERWOOD are based in London and work as freelance translators from and into a number of Central and East European languages.  Julia Sherwood was born and grew up in Bratislava, Slovakia, and spent more than 20 years in the NGO sector in London before turning to freelance translation some ten years ago.  She is editor-at-large for Slovakia with the online journal Asymptote. Peter Sherwood’s first translations from the Hungarian appeared fifty years ago, but he was an academic for over forty years before retiring and devoting himself more or less full-time to translating. Their joint book-length translations into English include works by Balla, Daniela Kapitáňová, Uršuľa Kovalyk, Peter Krištúfek (from the Slovak), Hubert Klimko-Dobrzaniecki (Polish) and Petra Procházková (Czech). Peter’s translations from the Hungarian include works by Béla Hamvas, Noémi Szécsi, Antal Szerb, and Miklós Vámos. For more information, see juliaandpetersherwood.com