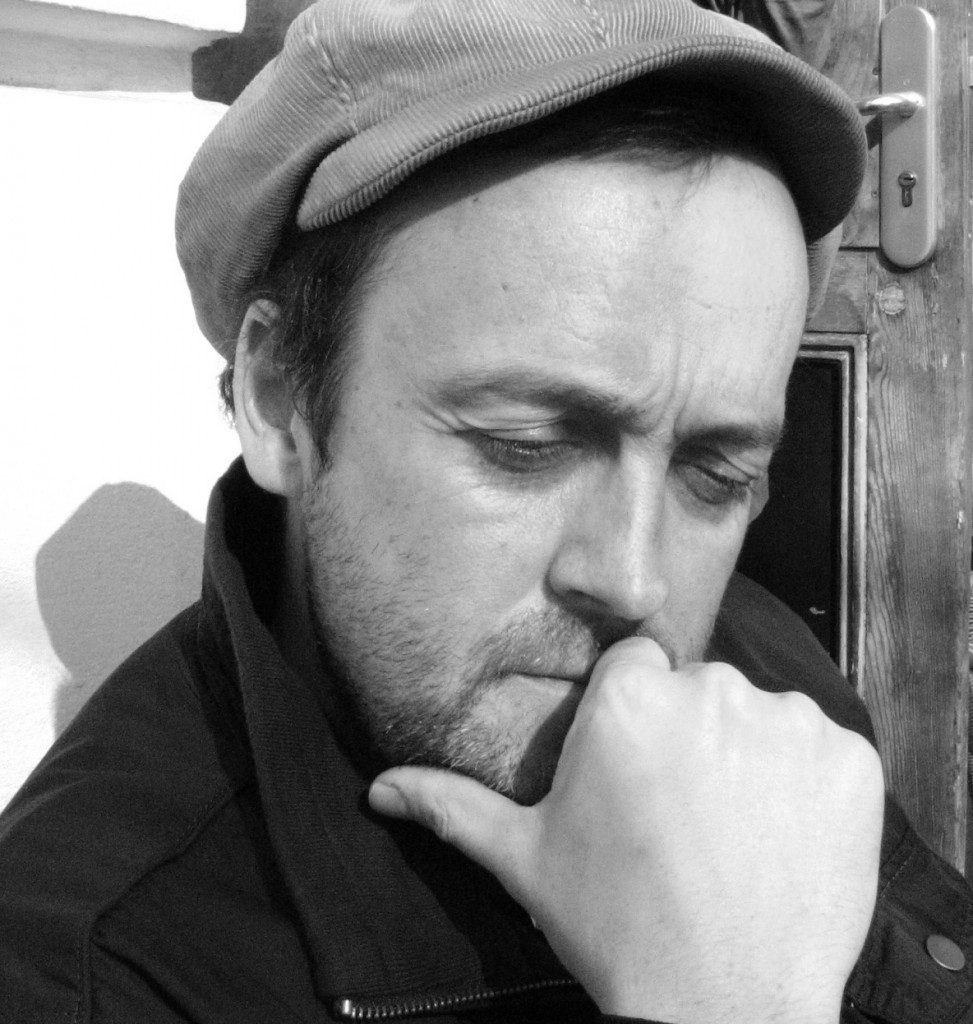 HIPSTERS AT AN EXHIBITION

“If we all had our middle fingers removed, would there be anything left to say?”

It is the vernissage of a major exhibition at the Alten Nationalgalerie in Berlin. Upon hearing this voice devoid of any immediately apparent source, several of those present peer into their phones without typing anything, the modern-day equivalent of scratching your head.

“Ah, yes,” continues the voice, through the gallery speakers, through the picture-guide headphones, live on all frequencies to the city’s self-appointed cognoscenti. “Crushed by fear and foreboding on one hand, and, on the other, by an SSRI-induced compulsion to acquire, your alphabet has gone numb, your words have resigned, not a trace of rebellion remains about your phrases.”

One or two people step closer to a painting, to a Pechstein or a Pissaro. They wonder if the voice is emanating from behind canvas. Perhaps it is an intervention, a radical trick by the curator to emphasise this rare hanging together of Expressionist and Impressionist works. All spirit and no body, after all!

The voice goes on: “For example, let me tell you about the use of the word, ‘cool’. It’s simple: no one is cool. Everyone flaps and flusters and frets. Cool is a conspiracy. Cool is complicity. Cool is conformism. Cool is complacency. Cool is the word you use because your language has been run down run over run in by the corporate-banking-media-marketing-political rhetoric’s urge to flatten all discourse, because They want you to be unable to come up with anything else, because that would be a form of resistance. Instead, ‘cool’ is a catch-all term that merely expresses your utter subservience to the system. Your complete inability to come up with anything else.”

“In any case, haven’t you confused financial independence with independent thinking? Haven’t you paid large amounts of money to become clothes-horses in designer dressage! To be branded like cattle! If that’s not mixing my morphisms! It’s not fashion, you fops, it’s capitulation! Boutique is not the opposite of antique! More like the opposite of critique, cretins! In my day, we wouldn’t be seen dead or alive with a label. We’d have considered ourselves failures, collaborators, spiritless sold-outs, but you lot are walking billboards, bearded mannequins defiant only of your own ignorance, sleep-walking representatives of the system that is destroying us while you claim, with day-glo desperation and oddly-shaped outfits, that you are somehow ahead of the pack.

No, you are the pack.

“Jesus, I could turn some of you upside down, and you’d still be half my age.”

Clearly, whoever is generating the voice can see the people throughout the several rooms of the gallery. Therefore, the voice-bearer has to be inside the security centre, using the cameras, and the PA system. Among the gallery-goers, meanwhile, there is a growing belief that this bizarre episode really must be part of the exhibition opening, and this belief is manifested in an outbreak of chuckles and coughs.

“Oh,” continues the voice, “and don’t use the g-word when you say you’re going to look something up! It’s not a verb, it’s a monstrous corporation making fun of you, exploiting you, turning to their profit your each and every tepid offering, your diffident typings, your ostensibly earnest enquiries! So, please say you’re going to research something, to investigate, or to check, or, if you can’t find your way around this unravelling world without your router, then use another search engine, one that does not provoke then trace your vulnerabilities in order to exploit them. Don’t follow the g-roads to ignorance and compliance!”

The voice goes on:

“Just as we are living in the age of the unfinished simile. An anti-metaphorical epoch! ‘He was like, I was like, it was like….’ then nothing. What was it like? Please tell me what it was like…Finish your similie! Similarly, the reversal of like and literally; and the worst, the coming together of the two, their cancelling each other out: “I was, literally, like…” which means you’re doing Their work for them, with this flagrant flattening of discourse. Don’t you see? They want to fetter language, to lock it up in that lazy library of misinformation, that flickbook of falsities. Language is a trampoline not a fucking net! See, that’s a metaphor. And a better one. Now outjump yourselves!”

One or two in the gallery rooms sit down, still gazing at phones, or up at the speakers, or they adjust the channel on their audio-guides. Without relief.

The voice goes on: “Or else you’ll remain an entire generation marooned on its way to that self-liberating simile, defeated before you could re-imagine yourselves metaphorically, because language – joyous, playful, difficult, malleable, unpredictable! – is resistance, and the g-word empire of anti-flourish, and that other loathsome g-word, globalisation, know all about this, so they snapcrap and crop you into an infantile register from where you are at their mercy! And their dream (already some way toward fulfilment) is for you to climb down a drain in one city, and up through a drain in another city (while, of course, paying over the odds for this ‘authentic post-industrial experience’), and in a different country, and not be able to tell the difference. Your nostrils won’t even twitch! Besides, once you’ve clambered out, your ready-wrecked retinas will be far too busy absorbing the glare from your screen.”

The voice continues: “Finish the simile! Make that metaphor! Otherwise they will continue to be finished for you by in-growing ideologues and oligarchs in cahoots. Not to mention media magnates. They’ll tell you what it’s like alright. Literally. Like it or not! They’ll reduce you to a numb-thumbed user of an otiose alphabet, and one – yes, you’ll all be just ones and zeroes soon, you binary cadavers! – one who is satisfied with the “can I get?” anti-mantra, sustained by neither graft nor grace, and which you base on the absolute assumption that what you demand will be delivered. Instantly.”

“And yet, all you’re bothered about is how you look during your surrender? Cool! In which case you have only yourselves to blame for allowing Them to reduce you to a name on the electoral register whose vote somehow never seems to count. To a member of the opposition who has long since given up on the idea of opposing, effectively, however vile those in power have become, are becoming, will become. Woebegone! For of course They benefit the most from this literalisation of discourse; a trammelled trajectory that’s reductive and homogenising and keeping the game in the hands of the ignoble global powers. G-word!”

“So, catch your imagination unawares, get back to your own rebellions. Don’t auto-correct yourselves into acquiescence.”

In the gallery, roaming eyes are now accompanied by lowered brows, shrugged shoulders, up-turned palms. Some turn back to their screens, and to the canvases via their screens. But this new phase is interrupted, and with some urgency, by a sudden knocking.

“Berliners! They’re at my door! They’re going to drag me away for this! For my private lecture straight into your hearts and headphones! Aren’t you all just muted trumpets with those things on? Don’t silence yourselves! Don’t be mannequins, walking bill-boards, bearded walking bill-boards, oh, that doesn’t work, but it’s still better than ‘like, literally, like, dot dot dot’. A mixed metaphor is better than no metaphor at all! A thrust at truth and a try!”

“And, you, there, hey you, you young lady, you standing in front of Auguste Chabaud’s Girl in a Red Tie! Maybe you do look a bit like her if that’s what you’re thinking as you snap yourself beside her, but why your grandfather’s winter coat tied with string, and no socks on this freezing night? You put your brain in brackets with headphones, and then leave your ankles out in the cold? No sockets, no socks! Or are you going to plug those in somewhere, too? Maybe you’re trying to expose your Achilles’ Heel? I think They found it already! And while I’m coming over all ancient and modem, why are you all wearing Nike, you trust-fund turncoats? I’ll give you a good ticking-off! Poor Nike, no longer the goddess of Victory but of the vanquished! Just like those machines you all rely on that have, embossed on their lids, the symbol of the Edenic fruit with the bite taken out. How fitting to equate our era with the fall of humankind! Wir alle fallen!”

A sound of dragging furniture, a scuffle caught on microphone. A door kicked or slammed. Then, after a couple of seconds, the voice comes back, but now in tones betraying harrassment.

“Social Medea will devour her children! So don’t keep going on there to say how busy you are! Everyone’s busier than everyone else! Even the idle are busy! How capital complicitous of you! You say you have sympathy for the mice, but you keep on feeding the cat! So stop telling everyone what you’re working on, stop going on about how far along with your project you are, with pictures attached, unless you really are in full collaboration with late oh-so-late cap-it-all-ism, and must keep producing-wasting-producing caught not so much in a vicious circle as a dumb spiral, and all in a vain bid to stem your trembling need to know whether or not it’s even worthwhile to bother getting up in the morning. Or maybe you want your epitaph reduced to an algorithm too?”

“Anyway, my butter-beards and long bottoms, keep pulling up your jeans to your chins if that keeps your kind particles where you won’t lose sight of them. But never give up on grace! And most of all, don’t lie down in language. Don’t be trampled, crumpled, Trumpled! Language leaps!”

“When the west shits itself over its clamorous turns about face, swaying in and out of its own crap flying back the other way, then they will look for silence, for beauty. Then they will come for you.”

JAMES HOPKIN has been living and travelling around mainland Europe since 1998. His short story ‘Even the Crows Say Krakow’ won a UK national short story prize in 2003, and he signed to Picador the following year. He has published the novel, Winter Under Water and a book of stories. On BBC radio, he has had 9 stories dramatised by the BBC, including trilogies set in Georgia (where he has read twice), and Dalmatia (where he has been writer-in-residence in Split), and numerous other stories anthologised, including for the Edinburgh International Book Festival. His new novel, Say Goodbye to Breakfast will be published by Picador, closely followed by a collection of short stories.

Hopkin has written about literature for the New Statesman and the Guardian since 1998, including interviews with Ivan Klima, and Nobel Laureates, and features on Czech, German and Polish literature. In February this year, during his two months as writer-in-residence for Praha, Mesto Literatury, he wrote a feature on the 20th anniversary of the death of Bohumil Hrabal for the Times Literary Supplement, and read the above story with Jachym Topol.